When you’re familiar with both, at some point you might realize that narcissistic abuse and everyday oppression have a relationship to each other that is analogous to Newtonian physics. They are not exactly the same, but if you apply one to the understanding of the other, you will consistently get HIGHLY USEFUL RESULTS.

Being a performance artist, Rhapsody often has to get out and make connections that, as a writer, I don’t have to make. All I need is my computer and a wifi connection, but she needs to go to places where people gather. Getting on the radar of a venue’s organizer. Making connections in the local, sex-positive, queer, non-monogamous, indie, music scene. Trying to collaborate with folks to cross-pollinate between fans. There’s a measure of social interaction and gatekeeping that I try to avoid but that is essential for live performance arts.

Out in the wider social milieu, Rhapsody sort of expects to run into all types. But in the world she’s built around herself of queer, leftist types, there’s a lot more of a curated experience. It takes a certain type to cheer on a song about Mario and Luigi riding train on someone who likes “golden coin showers.”

There was an artist. Let’s call him Brad. Brad was someone she looked up to. Someone she was excited to meet. Someone she hoped to work with. An artist who’d played the venue Rhapsody had dreamed of playing and worked hard to get to. And while they were chatting about possibly collaborating (another dream of Rhapsody’s), the conversation took a turn.

Brad was telling Rhapsody that the venue made him change anti-sex-worker slurs (something he thought sacrificed his artistic integrity), and they wouldn’t let him sing a song about being a member of a doubly marginalized subset of the queer community if he wasn’t actually a member of the group in question (a position he found objectionable because he had friends in that community—some of his best, I’m sure). But he had no end of problem bloviating at length about Rhapsody’s own lyric to “peg the patriarchy.” Because that was an offensive concept to him. Suddenly Rhapsody was being mansplained about just how difficult it is nowadays to be a cishet, white guy.

Of course, this sentiment isn’t exactly entirely inaccurate from a social justice context. (It’s a little absurd in general, so it certainly gives insight into what Brad thought about social justice.) But there are ways to phrase it that could have held space for that frustration while acknowledging the context in which it mattered: “Being at the top of the social hierarchy means I have a lot of unearned and often unexamined advantages; venues that work hard to be safe spaces aren’t likely to give me free rein to say whatever I want, and that can be frustrating.” This would, of course, also mean not framing what amounts to mild frustration like a whiny victim who is being censored—as if the reaction to oppression is somehow as bad or worse than the oppression itself. Or as if there aren’t people whose identity intersects with multiple forms of marginalization who experience silencing tactics far worse than having to pick a different song from their extensive library…for a given venue. Faux wokeness is nothing new in Rhapsody’s world. The world is full of cishet, white guys who think enlightenment is castigating the "drunk uncle” bigots and then proceeding with absolute identical treatment regardless of history, institutional levers of power, or the socio/political power differentials. Exactly the sort of people who think the “real” problem is that they can’t say whatever they want in other groups’ safe spaces.

Dealing with the disappointment that an artistic and creative favorite turns out to be kind of a “dudebro” was hard, but the worst thing for Rhapsody was realizing that she had to be silent. She had to just “grey rock” this guy and let him blow up her phone with his “it’s tough to be a cishet, white guy” complaints…and then, without rebuttal, go about her day.

She realized she couldn’t point out his behavior was pretty entitled. She couldn’t defend the position of the venue to keep things safe for marginalized communities. She couldn’t explain why a token friend who thought a song was okay might not be a the slambangingest judge for the whole community, nor their opinion a good criteria for allowing it at a venue . And as uncomfortable as that was, she realized that she had to be silent because anything she said was going to make the interaction get even worse. She had to be the bigger person. She had to not take it personally. She had to walk away and not talk about how she really felt.

Rhapsody has a history that makes her sensitive to abuse—particularly from narcissists. And in that moment, she realized that she was having the same reaction to Brad as she would from realizing someone was a narcissist. A deep, prevalent frustration that the best that could be achieved was walking away and “being the bigger person,” an unfortunate soft euphemism for ignoring all grievances because bringing them up will make things worse.

But the analogy between emotional abuse, particularly narcissistic abuse, and privilege is sort of a flash epiphany. Once you see it, it’s like the smudge on a movie theater screen—you probably won’t unsee it. 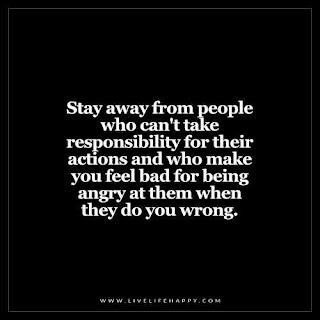 There could hardly be a more perfect parallel to the checklist of what characterizes a narcissist’s grandiose sense of self-importance (or the deep insecurity of covert narcissism) than can be seen in what we call privilege. Whether spoken aloud by the unapologetic racist/misogynist/transphobe/homophobe/etc…or denied vehemently while clung to in the form of hypocritical double standards, holding the worldview of superiority, entitlement, denial of empathy to some groups while demanding it for themselves, being exploitative of others while being hypersensitive to anything perceived as unfair regarding themselves, insisting all advantages have been earned despite clear evidence to the contrary, and presuming anyone who wants a fair playing field is merely envious of their success.

We can even see more parallels of narcissistic things like wanting to be the center of attention when white men insist that any media that doesn’t feature them is a terrible trend of “forced diversity” (even though their ongoing hegemony is a simple matter of demonstrable fact). It shows up in haughty behaviors (often ostensibly linked to “culture” but somehow managing to target everyone who isn’t at the top of the social hierarchy regardless of their culture). All of these characterizations of narcissism are ubiquitous staples of privilege.

And then, of course, there’s the gaslighting. (“Oh, that wasn’t REALLY racism/sexism/transphobia.” “There isn’t a bigoted bone in our bodies—this is really about [adjacent issue]”) Everywhere you look, marginalized communities are being told they aren’t really marginalized and that every rock-solid piece of evidence they proffer up has some other explanation or is only ever the behavior of a few bad apples and not a systematic, systemic problem that should be actively confronted by those who benefit from it.

And if it did, it wasn't that bad.

And if it was, that's not a big deal.

And if it is, that's not my fault.

This is a poem called “The Narcissist’s Prayer” (I’m trying to find attribution if you know it.) But it could just as easily be called “The Privilege Playbook”. This is the exact order of the scripts used when telling people that their lived experiences of oppression and marginalization aren’t real/that bad/anyone’s fault but their own. First, deny that privilege and marginalization even exist. Then, insist it's not really a big deal and that someone is just "looking for reasons to be offended." And then, deny complicity because "not all X." Then, fall back on their own pure and unbigoted intentions (over systemic and systematic impact). And if all that fails, blame the people for their own lack of progress because of the "tone" of how they express their injustice. "I might actually care about this if people would just protest more nicely/more quietly/more ignorably."

Also, these cishet, white dudes (clueless or deliberate) are constantly doing exactly the things they accuse others of doing. Indoctrinating youth into a paradigm where their narratives are unquestioned.  Silencing speech. Authoritarianism. Violence. Not to mention statistically being most likely to follow and support a political party that considers itself the victim of the very things it is actually doing (like destabilizing free and fair elections) and justifies all manner of bad behavior by somehow convincing itself that the other side would be even worse. Of course, the truth—by any fair and consistent rubric being applied—is that it is really these folks who are doing all these things, and those they accuse of it rarely are—or are only doing so on a much more limited scope and/or as a reaction to their own mistreatment (like safe spaces). What it brings to mind immediately is how a narcissist is so self-absorbed that they can’t help projecting, and everything they think is happening goes through the filter of what they themselves are doing. Or more succinctly: “Accusations from a narcissist are confessions.” Which seems to describe white dude indictments pretty accurately. 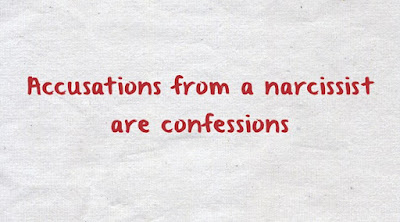 Obviously, it would be a profoundly damaging bit of ableist nonsense to say that every cishet, white male is a narcissist. But to notice that the way privilege behaves mirrors narcissism, and how the way it hurts mirrors narcissistic abuse is a highly useful observation. The way privilege reaches out and changes narratives, won’t accept blame, attacks anyone who points out that they are being hurt by its behaviors, accuses others of what it is doing, and cannot seem to muster empathy gives us a roadmap for what to expect.

Unfortunately, this insight is not quite as useful on the macro level as it can be on the interpersonal one. We can use the D.E.E.P. method to keep ourselves safe from an individual. (Don’t Defend, don’t Engage, don’t Explain, and don’t Personalize—all these things only make the interaction worse.) It’s considerably harder to simply work around or “grey rock” the group that is running most of the institutions. We can’t go “no contact” on our own culture or grey rock our country. (Although, if you’re paying close attention, this is precisely what safe spaces are trying to do, why they’re so important, and why letting privileged people opine on the manner in which such spaces stay safe is such an epic shit-crumpet move.) And of course, a society can’t be diagnosed with a disorder in the sense that a trained psychologist [and ONLY a trained psychologist] can diagnose an individual with Narcissistic Personality Disorder.

But in terms of how to contextualize what is happening, how to predict what will happen next, and how to deal with individuals who are not actively challenging their privilege every day, some basic understanding of the narcissist playbook will yield (time and time again) extremely useful results.