Writing About Not Writing (And Ukuleles) by Arielle K Harris 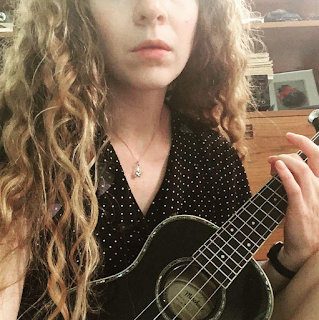 Writing About Not Writing (And Ukuleles)
Arielle K Harris

I am a writer who has written things. Among them, I self-published a novel retelling Beauty and the Beast, titled Bestial, in September of 2016, and then shortly after released a very silly short story called The Adventurous Time Adventures of Doctor When: A Steampunk Time Drama in Eight Acts – which has inexplicably remained in the top 100 on Amazon for its genre for the two years since its publication. I have written guest posts here before, including a series on story fundamentals in early 2017.

But then something happened around the summer of 2017: I stopped writing.

I could blame the fact that at that time I needed to get a job, and the one I was qualified for is a field which is emotionally and physically draining, requires long hours and late nights, and can be utterly heartbreaking. I could blame the fact that I now had to do a lot more juggling in order to be a single mother with these responsibilities, and that I just needed a little damned break. I could blame so many things, and at times I do exactly that in order to give myself a free pass, but ultimately it was no outer influence that stopped me writing. It was just me.

Something happens when you let hard-won habits slip – inaction becomes addictive. The longer you let it go the harder it gets to pick it back up, each day of your lapsed discipline feeling like a weight you must lift in order to start again. You want so much to do it, to make beautiful things that have extraordinary meaning, but it’s so very heavy by now and so difficult just to try. Your fear of failure becomes practically insurmountable.

For almost a year I let this feeling overwhelm me. I would try half-heartedly to write something short-form like a poem or song lyrics from time to time, but never attempted another novel. This summer, however, I realized that it was coming up on two years since I published Bestial, and that at the time of its release I had told myself I would try to write a new novel every year. So I did something drastic.

I bought a ukulele.

“What the hell does a ukulele have to do with novel-writing?” I hear you cry out in bewilderment and perhaps a little bit of concern for my mental well-being. “Are you becoming some kind of rabid hipster?”

No, my dear readers, I was not succumbing to a lifestyle of mason jars and flannel and beard-appreciation. I was merely looking for inspiration.

My creativity has often been tied to music, I have sung in bands at university and I have written songs since I was an angst-ridden teenager. I needed a kick in my creative ass, and a shiny beautiful instrument with which I could be challenged was the perfect kick.

So I started writing songs, spending my evenings attempting new and unusual finger contortions when I used to sit in a stupor watching bad television. I wrote lyrics that spoke to me. I made beauty again.

And then, because it still wasn’t enough, I joined a MeetUp group for writers. It was a special kind of writers’ group because there was no emphasis on sharing your work or having workshops of any sort. I sought it out for this very reason as I’m the kind of writer who needs to write in solitude and I can’t think of a worse kind of hell than doing writing workshops. Sorry, fellow writers who enjoy those, it’s just not my jam.

On a random Thursday night, we met at a downtown Boston steakhouse, drank cocktails, and talked shop. I found myself feeling oddly like I belonged in ways I hardly ever do in a social setting. And when we talked about our respective works of writing I shared mine and felt validated. I was a writer; I had written, and even published. I then found myself later explaining my methods, and told them about the discipline I used to have and the schedule I used to keep. How rigorous I was about remaining focused for an entire “work day” of writing. I heard myself speak and I respected my past self while simultaneously feeling disappointment in my present self. Not writing was not just a failure of my discipline, it was also a failure to be who I am as a creative individual. I was not trying hard enough.

So when Chris sent out his call to ask his former guest bloggers if any of us were able to offer a new post, I knew this was a challenge I had to meet. I no longer want to feel disappointed by myself.

I should be writing.


Arielle K Harris is the author of the novel Bestial as well as the ridiculous steampunk time travel drama short story The Adventurous Time Adventures of Doctor When. She is responsible for one very opinionated small human as well as a writer, poet, falconer, knitter of many half-finished scarves, drinker of tea, enthusiast for wine and sometimes has been known to have wild birds in her spare room.
She can be found online at her own website: www.ariellekharris.com as well as on Facebook:https://www.facebook.com/ariellekharris/ and her published work can be found on Amazon here: https://www.amazon.com/author/ariellekharris