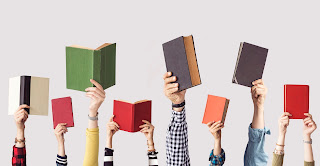 [Everything in brackets will disappear in a few weeks.

So first thing's first. We have to come up with a name other than "NOTpolls" for these recommendation lists. I think that worked for the first few weeks when I definitely wanted to make sure people knew we were pivoting from the polls I've been running for years to something completely different. But I think I'll just start calling it Book Rec's.

Here are the recommendation lists that we've compiled so far, along with the links to their original pages. Plus if you want to get in our CURRENT Book Rec's conversation for best Romance (book or series) you can go here.

This list will include more and more categories as time goes on. Check back to see what gets recommended.]

All of these categories will come around every couple of years, so if you don't see a book you feel should really be on here, stay tuned, and eventually you'll get your chance to reshape these lists. Don't forget that each category has a link to the original page where you can go look at all the gushing reviews in the comments and check out the "UNSUNG HEROES" list (which are books that are maybe not "the best" but that don't get recommended enough and folks think everyone should know).