Elliot Rodger and The MRA/PUA On Writing

Situational Irony- Killing six people in order to show how foolish they were for not recognizing how nice you are.

Tragic Irony- Writing for years on MRA message boards about misogyny, holding a number of overt and well documented misogynist beliefs, writing a manifesto outlining your misogynistic beliefs, making multiple Youtube videos in which you reinforce your misogynist beliefs. Making a final video of "the day of retribution" because no one will give you "pleasure" where you explain that you're going to kill those "blonde slut[s]" for not sleeping with you, literally saying that you were going to punish women because you hate them, committing mass murder, and then having most of world blame Aspergers, gun control, mental illness, the zodiac, a little piece of cheese named Whipperwil, and basically twist themselves into pretzels to blame anything and everything but misogyny.

The world is filled with tragic irony if you know where to look.


The Unreliable Narrator- A narrator who repeatedly insists that he is a really nice guy–in fact "the perfect guy" and if you can't give him sex, love and adoration, he will indiscriminately murder people and turn them into "rivers of blood."

The "Nice Guy" trope- A man who thinks he is entitled to sex and companionship because he isn't an utter asshole (though evidence suggests he is less sweet than he claims), and who blames women for not giving him sex despite this niceness. (Like women are vending machines in which niceness is deposited and sex comes out.) Or one who hates women for not finding him attractive based on some deep positive qualities of which only he is aware.  From "The Wooing of Ariadne" to modern cinema women are constantly overcome by ecstasy for how nice dudes are and how being treated like a person is so refreshing that their panties just fly off their bodies. And not just any women either. Nice guys are entitled to HOT women, so simply lowering their standards is not acceptable. (This doesn't work both ways, you see. Guys don't go around getting sprung by nice girls...unless those nice girls are also hot.) If a nice guy isn't getting laid, it's because women don't appreciate the really deep qualities of their awesomeness. It can't be because they aren't as nice as they think, are openly racist and sexist, are a jerk, need to shower more, have unrealistically high standards, are socially awkward, laugh like a donkey, say violent things, are simpering people who would rather harbor resentments than voice their desires, or expect people to fuck them for driving a nice car.

Misogyny in the western tradition- A long and enduring cultural tradition of marginalization towards women which is steeped in the literary canon (and conversely steeps within its influence) as well as having pervasive, almost invisible influence today. From Pygmalion and Symposium to Emily Gould's "midcentury misogynists,"right down to our modern authors who can't seem to pass a Bechdel test even when they know it's there. It is normal for women to be treated as a reward for the hero, as a commodity, as property, only in a story as a romantic interest, and for women's voices to be marginalized. It is so invisible yet pervasive at this point that a guy can basically declare for the world, "I'm going to go kill a bunch of women because I hate all of them categorically for not fucking me" and people will scratch their heads wonder about what factors could have lead to such a thing. 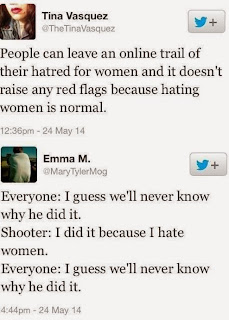 Scapegoating- To help you design realistic characters, the MRA has shown us how to scapegoat. You would think that after making a Youtube video saying that he was going to kill every "blonde slut" he saw for not having sex with him in his personal "War on Women," and then go kill everybody including the guys over the fact that they were having the sex that he was entitled to, the ONE thing that people wouldn't try to write off as a contributing factor would be misogyny. But you would be wrong. Blame the mental illness, the Aspergers, the gun, the entitled upbringing, or just call him a madman.... Blame anything but the culture the guy had been marinating in for years and invoked on video as the reason he did what he was about to do.

See also the more insidious versions of scapegoating that they do when they blame women for pretty much all of their misery and suffering.


The "Not all men" cliché- A man who needs to interrupt a discussion about hatred and violence perpetuated against women by men to redirect the focus onto himself and how he doesn't behave like that, and therefore everything the woman is saying is wrong. It is a classic derail that misses the irony of how making something all about him with all that narcissistic stop energy plays into the larger problem that men need to make everything all about them. Like their shining paladonic presence means harassment or domestic abuse or sexual assault can have no gender bias, and women should stop talking about it right away because it hurts their feelings.

Double Standards- Make your characters even more realistic by giving them double standards about their cultural blind spots! If you can imagine for a moment the way Islam would be deconstructed if a Muslim made a Youtube where he said he was going to kill "all you Christians," right before a killing spree then you probably have a pretty good idea for the pass misogyny is getting in this whole affair. We'll go to war (with two countries at once) if 3000 Americans are killed, but look the other way, clear our throats, and delegitimize the problem when 4000 women are killed every year because of domestic violence. And don't forget of course that extreme misogyny is equated with extreme feminism even if only one of them has a body count that grows by quadruple digits....annually....in the US.

The Human Condition- Everyone thinks they're the good guy. Nobody actually twirls their mustache or talks about the power of the Dark Side. Most people don't even realize how entitled they are (certainly not when they're blaming women for not fucking and adoring them). They have urbane, erudite, reasons that what they're doing doesn't actually harm anyone. They may even think that they are oppressed and treated unfairly and speak passionately and eloquently about that. All it takes is being unaware when one's behavior hurts someone else and it's especially easy to ignore that harm when your entire culture is telling you it's something else. So these guys who are literally still defending E.R. or believe that hating women is a good thing, they don't actually realize how much like a cartoon bad guy or Monty Python satire of evil they come across as by blaming feminism or women.

Of course anyone who would like to know how much harm is actually done can read about it at #Yesallwomen, but this is all just a satirical point in a funny about the writing.....right? No one would really defend his actions or blame the victims here right?

Email ThisBlogThis!Share to TwitterShare to FacebookShare to Pinterest
Labels: That "Feminist Crap"