Through the Worst of Times....Write On! 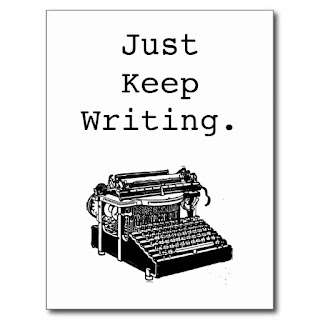 Yesterday's post–that little ten paragraph spit of personal update–took me twelve hours of sitting in front of my computer to write.

This post is part confessional, part excuse, and part....well, I hope something along the line of a pep talk.

I told you there might be a lot of personal updates in the next couple of months. After that we'll get back to my usual air/fuel mixture of mailboxes, advice, serial posts, ridiculous plot posts, and jazz fingers, but for now the lease in my brain is being repeatedly renewed by health problems, money problems, housing problems, and what-the-fuck-am-I-supposed-to-do-with-my-life-now problems.

Thank God for Ikea, I guess.


Last week I worked 45 hours at home wrangling toddler and cleaning, worked another seven and commute change teaching, did some packing, and poked around to find some possible living arrangements for the end of summer. And that was before I wrote a word.

Anyone paying any attention knows that I'm struggling lately, not just with the time and energy to come to the page but also with the emotional execution to write coherently once I'm actually there. My stories about a forty year old divorcee who gets a super soldier serum and destroys corporate capitalism by having THAT MANY THREESOMES notwithstanding, it's been tough to write lately. Sitting down to something meaningful when your brain is a cauldron of worry and stress isn't easy. The family situation I have so often blogged about in the past (and because of whom I have been able to do as much writing as I have) won't be there anymore, and when choices like living in one 10x10 room or commuting forty minutes are stuck in one's head, the words don't flow.

But by fuck, they come eventually.

I wrote a little while ago that the way out is through. For people who can set aside their writing in times of trouble, I almost recommend it. What a load off of one's mind and the time and energy to devote to what ever is going on. But for those of us who can't step away from writing, writing becomes our salvation.

I think this more than ever before writing becomes the way I am digging through literally the worst time in my life. I come to the blank page and it's like my brain has become a wild Mustang. It's everywhere and it will bolt at the slightest attempt to control it. There are a million things to think about and my fucking....blog post isn't one of them. That's why posts are going up so late and haphazardly lately.

But slowly, by degrees, I rope it in and get it close. One sentence--copied out of a book (just to get the words moving). One more sentence--this time half my own words. Two more--both mine. Then another two after that a little faster. Like a train slowly picking up steam...the words begin to come.

And it's not just the words appearing on the page (or the screen). It's not just that now I have done a paragraph. It's not just that now I might get a post up before midnight. My mind is also calming. It's jumping less. It's coming under my control. I am beginning to control it instead of it controlling me. And soon I'm writing. Not fast. Not a lot. But it's happening, and I'm back in control. Thoughts still spring unbidden, but they are slapped aside like greedy fingers reaching for attention instead of indomitable fists crashing into consciousness.

And after I've written, when I return to those thoughts that have preoccupied me, I it is as a well oiled project manager and not a frightened child reacting without thought. Now I can think straight. Now I can figure this out. I ask what we need, what we have, what our priorities are, and the answer becomes clear. Writing did that.

And it feels so good. It's all the catharsis and artistic bliss of finishing a manuscript that rushes through me. Even though I've done seven paragraphs and it has taken me twelve hours. I did it. And tomorrow I'm going to do it again.

If I have one bit of advice for writers, it should already be crystal clear what it is, but just in case I'll spell it out one more time: