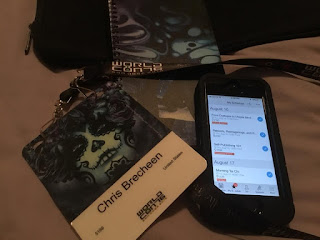 Prologue (Back to the Beginning)

A couple of Sunday's panels had a LOT of overlap with previous ones— in some cases right down to the multiple panelists who shared some of the same anecdotes as they tackled the same questions. I definitely aim for particular topics, and they’re issues I hope more folks can access, but a lot of times I picked between two panels, and I wish this had been a little more telegraphed.

I started by skipping a panel. The "Late Bloomers" panel sounded interesting, but even though I'm no spring chicken, I think I was going mostly to get some fodder for a blog post. However the room was ungodly crowded, seats were all gone when I showed up, and I was getting some strange looks. (I’m guessing the median age was around 65-ish, compounded by the fact that I look a fair bit younger than I am.) I don't think any one person meant anything, and they probably would have strenuously objected to the thought that they'd made me uncomfortable, but when 100 or so people give you the "Why are YOU here?" look, you can decide pretty quickly that the lack of seats is a dealbreaker.

The Shape of Horror

There was some time spent discussing the borderlands of dystopia, thriller, and dark fantasy and why each fails to be horror in some way. The exuberance and upbeat endings of most were what the panelists came up with.

Largely they came to a consensus that was not very concrete. Horror has downbeat endings, but mostly it leaves the reader with a sense of unease that stays there. It involves some level of unresolved tension––a lack of catharsis.

We Will Survive
This panel was very similar to the "Stop Killing Us" panel from yesterday, but was specifically about how sci-fi and dystopian fiction (also utopias) regularly have no people of color. They pointed out how very often the slate being wiped clean leads to SUPERPATRARICAL societies (The Walking Dead was brought up several times) and how, in general, the authors of these sorts of stories need to interrogate their narratives about which humans have value.

My last panel was much more technical than anything I'd done the rest of the weekend. It was about how we're basically overdue for something really, really bad. Spanish flu killed 50 million, and we're packed in closer, move around more, have more vectors, and enough people refusing to vaccinate that herd immunity is breaking down in a lot of places.

The panel spent a good chunk of time on how climate change would affect communicability. (Generally it would go up. Mosquitos are pretty much the most dangerous animal in existence and the further north they go, the more it's going to suck to be humans.)  And there were some pretty sobering (by which I mean terrifying) statistics about how the rise of sea level would create some prime real estate for some of the worst kinds of infectious bugs.

One thing that struck me was how simple the first "tier" of disease prevention was. Sanitation, clean water, and accurate information was really the first line of defense and we still don't have that in a lot of parts of the world. (In one question they were each given ten billion dollars and what would they do with it and the idea of vaccines or cures didn't really come up. Ten billion dollars would save a lot of people in the developed world but the place where it would save the most would be working on plumbing and water to the places most likely to be devastated.

And that was it. I had to get back to Oakland to start watching a client's cats, so I didn't get to stick around and watch the Hugos or go to all the awesome post-Hugos parties. It was a blast and a half and other than being so tired that I'm kicking myself for trying to keep up with a daily posting instead of giving myself a day or two off, I was thrilled to have the opportunity of a lifetime.

(Welp, I totally lied. Our poll is going up tomorrow––along with the "final thoughts" version of this running series about Worldcon––and I may even have some juicy gossip type drama about why it didn't go up tonight when we get there. Stay tuned!)
at August 22, 2018