Bullshit Narrative 25- Liberals Are Coming for Your Guns 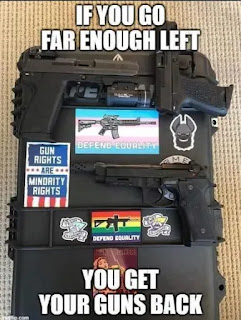 [This is the last of the 25 articles. Tomorrow I will do all the formatting to make each article have a link to the article before and after it and the head article have a link to all 25 parts. That's going to take a few hours, so it'll be my post for the day. This part in itallics will disappear then. Thank you for your patience with this monstrosity.]

This one is complicated.

At least not anymore.

Liberals WEREN'T coming for the guns. At least not most liberals. And they weren't coming for most guns. A fair number of leftists don't want only agents of the state being armed.

The vast majority of liberals coming for anything were coming for the assault style rifles (the AR-15 and all its clones) that are trivial to convert into full auto (conversions which are so laughably "illegal" with scare quotes around them that people will put up pictures of them firing it on Youtube under their real name).

They might have been coming for the extended clips, and the bump stocks and the background check workarounds and the laws that essentially let people walk around in Piggly Wiggly armed for war. They were coming for no waiting periods, gun show loopholes, and guns for convicted abusers. They were coming for some sensible gun laws. They were coming to get the FBI to take domestic violence more seriously when it comes to who gets to own a firearm. They were coming to try to arm-twist the nation into a conversation about how to defuse the toxic masculinity and entitlement that is causing young men to be this angry, about better mental health care as a matter of policy and change and not just a scapegoat for doing nothing, and yes, about some sensible gun regulations.

Sure some were coming for all of them. There have always been a few liberals who wanted all the guns melted down into statues memorializing murdered school children. And they've grown in number every shooting since Columbine. And if you wanted to just take your soundbites from them, you could whip up quite the persecution complex. But there were probably no more of those folks than there were folks who wanted rocket launchers to be legal. The political will just didn't exist. It was all sound and fury. And Texas sharpshooting the "other side"'s argument in bad faith to create a strawman.

By and large, however, this is a complicated conversation and people on all points of the political spectrum are DYING TO HAVE IT.  You'll notice that in this entire article, in no place—not even ONCE—have I suggested that we outlaw guns. I have only pointed out the bad arguments that are used to defend doing absolutely nothing.

There's a lot of of impassioned positions about gun control, and a lot of them have salient points, and not every argument belongs on a list of fallacies, but instead of having THOSE discussions, folks have let the NRA engage in this conversation for them. And the NRA is not debating in good faith. With a national, culture war issue, they have essentially convinced most of the GOP to follow them in sticking their fingers in their ears and saying "Lalalalala. I can't hear you." 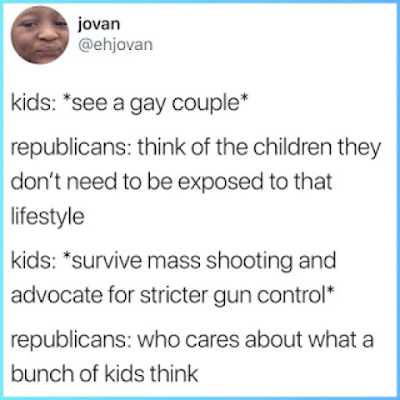 This shouldn't be surprising, as they are essentially the propaganda wing of companies that are war profiteering and have successfully controlled the narrative about why the war should be ramped up–earning a lot more profit.

But by leaving the table with nothing but some shitty, easily debunked narratives that are either fallacies or criminally and immorally negligent of nuance.... By disrespecting those who want to stop seeing their children murdered, while right wing politicians parrot the same bumper sticker slogans, bullshit boilerplate narratives, and TERRIBAD arguments that they trot out after every mass shooting and school shooting... By answering desperate pleas over and over with an outright refusal to have a conversation or compromise.... the NRA and the intractable pro-gun folks are basically ensuring that the political will is building to do exactly what they fear the most––to come for the guns.

They reduced us to one option and then are going to try to scare everyone else with the fact that we're considering it.

Maybe, and I'm just spitballing here, try not reducing us to one option.

Because I don't really want to take all people's guns or ALL the guns (and I know a lot of other liberals don't either).

But if ZERO compromise, ZERO discussion, proposing only LOOSER regulations (while handing the NRA moral authority to stand on the front line of this national cultural conversation with its racist double standard and adamant insistence that the only POSSIBLE solution is MOAR guns), MORE dead kids, and "suck it up, buttercup" cost-of-doing-business solutions…is being held up against melting down all the guns into statues…

And that is the ONLY choice I'm being given…