Amanda Palmer, Free Art, And The Art of Asking 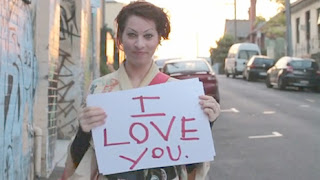 Amanda Palmer is in the news lately for her poem A Poem for Dzhokhar.  Amanda Palmer is both an artist of whom I should ever be so lucky to ever have a fraction of the talent and simultaneously an artist that people either love or really love to hate.  And even if you count yourself among those who hate her art or just hate her, she has some pretty intense and wonderful things to say about music, sharing art, and about asking for help.  She believes that art on the internet is going to shift from massive commercial followings of a few major superstars to smaller groups of more intimate fans who support less-well-known artists.

This clip is a few seconds shy of 14 minutes, but if you haven't seen it yet, I highly recommend it.  She talks about her job as a living statue before her performance art career took off as well as her experience  giving away art and asking for money instead of working at more and more inventive ways for technology to force people to buy it.


She nails it with the part about how awkward it is asking.  It makes me feel kind of uncomfortable to pass the hat here at Writing About Writing.  That's why I try to limit it to once every couple of months and give people lots of options for other helpful things they can do.  Maybe I'd be better if I spent a few years being a living statue.  I always feel like your skeevy uncle with the drinking problem asking you for money to pay the hooker that's passed out from heroin in his RV.

Those of you who support Writing About Writing bring tears to my eyes.  I know I have to turn in my Manlydudebro card in order to say that, but they really do.  (I was already on probation after watching The Iron Giant.)  This month has been better than any before it, and it's not the $9, I've pulled in from Adsense either.  It's the incredibly generous donations from a handful of peeps who take my breath away.

The numbers are still very modest for something I spend 30 hours a week doing (it looks like I'll make about $35 dollars this month between donations and ads), but the growth trend is encouraging.  I have to focus on the 40% growth over last month and not the fact that I'm making a quarter an hour (or I will cry.)  I'm optimistic about my ability to continue to offer all of my writing, including longer fiction works for free online.  That means if the trend continues, there will be more articles (and a little less fluff), more fiction, and generally more awesomeness.  With two other jobs beyond writing that take up about 45 hours a week, there is still plenty of opportunity to devote more time and energy to W.A.W. if it becomes viable.

But....dangling future offerings of fiction is still not asking.  And like Amanda Palmer says, asking is hard.

A few dollars to the Paypal link (upper right menu) would really be amazing and amazingly appreciated.  I can't share a meaningful look at you, but I will send you a thank you note (and I've promised at least one person that a character who survives the zombie apocalypse in one of my stories will be named after them).  Most contributors give about five dollars.  Some people give me five or ten dollars each month--I call them my patrons without the slightest sarcasm.  (They're usually the ones causing me to endanger my Manbrodude card.) One guy gave me the cost of a movie because he'd had more than two hours of entertainment here.  Paypal takes the first thirty cents, so a few dollars is better than one or two, but no amount would ever be unappreciated.

I would really love it if you would turn off your adblocker for the chrsbrecheen.blogspot domain (which will leave it on everywhere else online).  I want to make it clear that I'm not asking for anyone to click on ads just to "help me."  [It can actually hurt me.]  But if your blocker is off, maybe someday you see an ad for something you're interested in.

This is a really great article about why whitelisting websites you like may actually save some of the web content you enjoy looking at the most.  This is for the gaming industry, but it applies equally here at Writing About Writing.  The more of you turn off your adblock, the more I can make a trickle of income without you ever donating or clicking an ad.

So I would (~deep breath~) ask that you do that.

If you see an article (or especially if you dig up an old article) that you like, I would very much appreciate it if you helped me proliferate it.  I only have so many friends, and they pretty much have decided if they are interested in what I am doing or not, but friends of friends and further social networks are readers I can only get to with your help.

And of course any sort of social media strokes (+1s, LIKEs, Upvotes, etc...) will help me in the long run.

But whether you give me ten dollars a month like one particular angel/muse/patron or just take the time to comment on an article once in a while, you are appreciated.