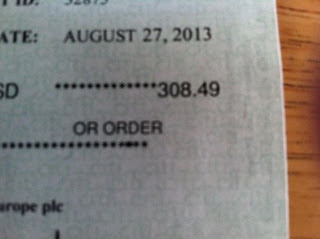 Got a picture here of another paycheck from Google--my second.  I'm not putting it here to brag.  I can't imagine bragging over making this little anyway.  (That three hundred dollars is representative of no less than 800 hours of writing, is the product of seven months of writing but couldn't pay my bills for even one, and even combined with donations from Paypal average out to less than minimum wage...in Malaysia.

A lot of people know the story of Stephen King's 400k advance (in 70's money) but not how long he wrote short stories for any place that would pay him a few dollars.  They know about Ray Bradbury's tenacity  for not giving upwithout really having a concept of the part about how long it *actually* took him even before he sold his first story.  They know that Rowling rose from welfare with her first book about a wizarding school but don't have a sense of how long she was writing ambitiously before she penned Philosopher's Stone.

I don't know if some genuine financial viability is in my future.  Right now I'm in that twilight between hobby and "really shitty-paying job." But I think it's important that starting writers have a sense of this part of the process.

One of the reasons I really like having a blog is that people can actually see how long I've failed, failed again, and failed better before I got there.  If you want to go back and see the first entries and how rough they could be and how they were WAY too long and WAY too wordy, it's two clicks away.  If you want to know how long it took me to make my first hundred dollar paycheck (ten months) it's right there to be seen in all its fantastically underpaid glory.  I think that's important because most starting writers seem to think they're going to sit down and write a novel that will get them a 400k advance or that they're only looking at a year or two of rejection before the money really starts pouring in.  And for many writers--even household names--that couldn't be less true.  They worked in ignominy for more like a decade (or more) before something really exciting happened.

As I mentioned on Tuesday, his probably will be the last check (or one of the last checks) I post online for the world to see.  When people don't see the grueling hours, they tend to think the paycheck fairy just stopped by or that the articles that got me that money were slammed out in ten minutes between episodes of The Big Bang Theory.

But in accordance with my Mission Statement, I want starting writers to take note:

A year ago, I was making an average of $20 a month.  Today that average is more like $100 per month.  This is if you take out the fluke success of "Creepy Guy;" the average is actually about $200 a month if you don't.  I tend to feel like that's not something I am likely to repeat for quite some time on a blog about writing, but who knows.  I also didn't expect it to go viral (at least not that much), so it's very hard to predict what future spaghetti will stick to the wall.

People don't seem to understand something about the "big scores" in writing (and art): 1) the planets only align for the Hail Mary once in a while, and in the meantime don't be afraid (or too good) to simply work the ball down the field, 2) you may not have the slightest idea what is going to catch on and what won't--some of my most "fire and forget" articles have done very well and some of the ones I really wrote for mass appeal have died a quiet death--and 3) in order for something really good to happen to a writer, you have to be on a few people's radars already.  Almost no writer (ever) simply bursts onto the scene from innominate origins.  It's okay for you to start small with people who know who you are and like your work.  In fact, those people will become better networking than you could pay for when you do write something that really nails it.

Email ThisBlogThis!Share to TwitterShare to FacebookShare to Pinterest
Labels: Inspiration, Meta, You Can DOOO EEET