A Question to the Readers of Writing About Writing 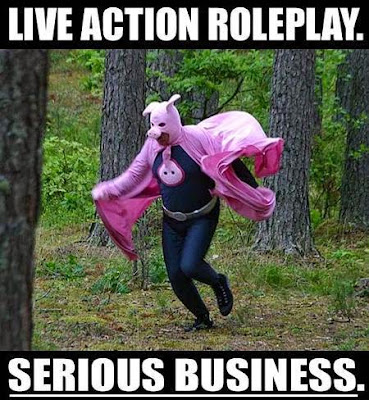 I have a question for you all.

It's a question you'll have to answer in the comments since we already have a poll running (which you should totes magotes go vote in bee tee dubs).

As you know I am writing very little this week here at WAW because I'm holed up in a bunker--a charming bunker furnished to look exactly like my living room--writing a Live Action Role Playing Game to be presented at Kublacon (a convention near the SF Airport) on Friday.

I personally find LARPs a very valuable tool as a writer. They are exercises in making every character interesting and fundamentally about how characters drive plot (rather than plot driving characters). A writer could do a whole hell of a lot worse than to write a character sheet for each of their characters before they start a piece of fiction.

My question for you all is (knowing that a LARP is not "a story" or anything that most people would consider fiction in the strictest sense, but mostly just a collection of character sheets) would you be interested in me publishing that information here. I would do a little write up of what these characters did, but it would mostly just be fifteen character sheets and some notes. I also can't promise any writing better than caffeine addled brain on "the night before it's due."