How Do I Write a First Sentence? (Mailbox)

How can I write a perfect first sentence?

[Remember, keep sending in your questions to chris.brecheen@gmail.com with the subject line "W.A.W. Mailbox" and I will answer one each week. I have a LOT of backlogged questions right now, but I will try to eventually get to all of them.  I will use your first name ONLY unless you tell me explicitly that you'd like me to use your full name or you would prefer to remain anonymous.  My comment policy also may mean one of your comments ends up in the mailbox. I may give myself a few slow balls right over the plate as I warm back up into a regular blogging schedule here.]

I could really use some help coming up with the first sentence.

Do you have any first-sentence wisdom you could lay on us? I know they set the whole tone of the novel, so I just sit there, frozen.

Look at your typical advice about first lines: They must be surprising. They must grab the reader. They must be vivid. They must establish your unique voice. They must be true, clear, amusing...they must contain the entirety of the novel. They are the "handshake with the reader." 80% of readers will decide whether to continue based on your first line. Everything you are as a human being and all your worldly artistic ambitions are riding on this sentence.

And look what you're up against!  “It is a truth universally acknowledged, that a single man in possession of a good fortune, must be in want of a wife.” “It was the best of times, it was the worst of times.” “Mr. and Mrs. Dursley, of number four, Privet Drive, were proud to say that they were perfectly normal, thank you very much.” “My name is Salmon, like the fish; first name, Susie. I was fourteen when I was murdered.” "Many years later, as he faced the firing squad, Colonel Aureliano Buendía was to remember that distant afternoon when his father took him to discover ice." "It was a bright cold day in April, and the clocks were striking thirteen."  "Mother died today."  I mean...DAMN, right?

Let me give you the best advice I possibly can about your first sentence.

There is absolutely no earthly reason in any of the buttholes of the Greek pantheon that the first sentence you write should be The First Sentence™ of your written work. First of all, if you're just sitting down to a blank page, you don't really know what your story is about. You might have some ideas, but the process of writing is messy. Your story is going to change. (I know. I know. Not YOUR story. But just for shits and giggles, play along with this concept that every creative person in the whole world has been trying to tell you that the process is messy.) You may find new themes emerge. You may find your main character isn't important but that minor character is who the story is really about. You may decide to start your story at chapter three and skip that impossible-to-digest solid twenty page bowel movement of exposition you tried to cram into chapters one and two. You may find the idea that brings your whole story together in one beautiful symbol.

I mean, who knows what's going to change. 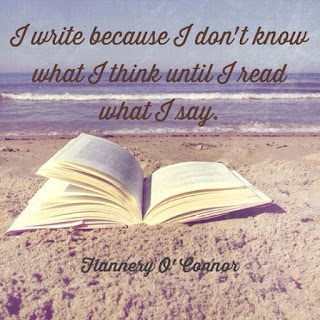 But there's no way your first sentence can reflect all those changes until you've written the damned thing. And if you're trying to shoehorn in something you thought was brilliant before all that other shit changed, it's going to feel forced and awkward. Like that weird joke that your friend tried to tell that didn't REALLY have to do with the conversation, but they were so excited about telling it that they kept trying to work it in. ("Your conversation about high priced dog kennels reminds me of this one time I was eating designer cheese in Dubai....")

The first piece of advice I give my college students who are writing essays when they're hung up on their introduction or thesis statement is to write their paper first, and then figure out what they wanted to say. As they wind into their conclusion, most of them have a much better sense of what they're trying to say, and can go back and write a killer introduction. The same thing applies here. Okay, that's not true at all. Actually, the first bit of advice I give them is to learn what a fucking comma splice is and stop using "I feel" in formal academic essays, but shortly after that we get to the introduction/conclusion thing.

All trying to get it right the first time does is paralyze you into not writing. It's performance anxiety. You sit at the screen in a blind sort of panic because it has to be perfect. You know it won't be perfect, and so you rack your brain in a Sisyphean quest for words.

This paralysis is at the heart of 99% of what people call writer's block.

I don't want to trivialize how frustrating and real this paralysis ("writer's block") can be. I really don't. But fundamentally, most writer's block (especially the "first line" kind) is a lack of respect for the process. You're sitting down and thinking that you have to get it right.

You don't have to get it right.

You're sitting down thinking your sentence has to be surprising, grabby, vivid, amusing, true, and clear, and that is what's holding you back.

Let me say that again: IT DOESN'T HAVE TO BE THAT STUFF.

Not yet anyway. There's no WAY this is going to be your first sentence by the time you're looking for an agent or trying to shop it around or publishing it. Fuggidaboutit. You will change it. You will revise it. And you just gotta trust me that you have to respect that part of the process. You have three or four drafts and a dozen revisions before you have to think of your first sentence in some sort of "handshake with the reader" kind of way, and by then you'll probably have a much better idea of how to do it, what you want to say, what your voice is in the piece, and how to make it clearly introduce the story.

When you sit there frozen because your first sentence isn't perfect, it is absolutely frustrating and real and I don't want to diminish how painful it can be, but it's happening because you're not having faith that it's okay to write crap. It's performance anxiety when you haven't done the rehearsal and don't know your lines. It's the curtain opening up on a Madison Square Garden audience, and you don't even know the name of the play yet. And unless you're Ian McKellen or James Earl Jones, you're going to freeze up. For a writer, the rehearsals and line readings and tech week all happen in the rough drafts and revisions.

That means being willing–nay having FAITH–to write your crappy, flawed, predictable, forgettable, false, and muddled first sentence that you will go back and fix later.

Write ANY sentence. Any sentence at all. Fuck, if you want, use a randomly generated sentence for all it's going to matter to your final product. See what sort of juices it gets flowing to try and make that the start of your story. Just get your ass writing and stop trying to be perfect. You could even try to write a hilariously bad first sentence.

But you're never going to reach perfect, and you can't even come close on your first attempt.

You have to kill that inner perfectionist with fire, because no artist can work with that asshole looking over their shoulder. (Okay, maybe don't kill them with fire. You'll need them later to sniff at your work when you need to revise the third draft. But definitely wound them for the duration or put them in the Pit of Despair™ and suck the life out of them until they're mostly dead.)

Artists have to have permission to fuck up. (The good shit happens when you're making mistakes anyway.) Destroy the impetus to write something on the first shot that will never change. That's exactly what's making you sit there like a statue called The Blocked Writer™, eating coal and hoping to crap diamonds because you're so anxious about how to get it just right. Let go of your literal and hypothetical sphincter, and produce some crap!

Once you've written your story, then all that advice about how to make a first sentence that kicks ass will be so much easier. You will be more able to see what your story is and what will reflect your voice and how to be clear and grab your reader's attention.

If you're blessed with first sentence mojo, maybe you can come up with them and they don't change or don't change much throughout the life of your story. For all the rest of us mortals down here on Earth, our story's first sentence–the real one that we end up going with–should probably actually be one of the last ones we write.