BioShock Infinite: Your Argument is Invalid (Part 4 Subtext in Art) 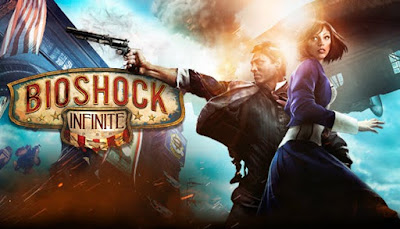 1- This is part 4 of a multipart article, and I’m jumping right in without much of recap.

You can go back to Part 3

Or go all the way back to Part 1

2- While I’m not decoding the end or discussing the plot directly, there will be spoilers. (I’m also going to be doing some minor spoilers for Alien in this post.)

What about subtext? Does Bioshock Infinite have any of that?

Subtext is one of those things in art that is a little hard to explain, but it is easier to describe.

"Wanna get something new on your pizza?"

"You're welcome to get your own."

"I don't want my own....pizza. I'm just tired of the same old thing and never trying anything new."

Now, you know for sure this conversation isn't REALLY about pizza. That's subtext. Deeper meaning. Something beyond what the superficial appears to be. A layer beyond. In music without lyrics, this can be as nebulous as feelings evoked by the minor falls and major lifts and resolving Nimrodian chords or as deliberate as "This is a song about war. It's called Mars, the bringer of War."

Let me give you an example in film: Alien. Alien is a movie about a mining crew that finds an egg and the alien runs around the ship kicking the crap out of them until Ripley, the protagonist, blows it out the airlock and then fires thrusters...in its face.


And how many times has this plot unfolded exactly in the same way in a million forgettable movies? Horror. SciFi. Scifi Horror. We’ve seen it done over and over and over again. Why is alien one of the most praised horror films of all time?

Because Alien is steeped with subtext about something else—specifically about rape. (Okay so here is the content/trigger warning for the next couple of paragraphs of discussing Alien's subtext, so if you want to meet after the picture of the bunnies below, I’ll see you there.)
.
.
.
.
.
.
Last chance to skip ahead.....

This deepened subtext of Alien not only taps into deeper primal fears, but flips the script gender wise to do so, creating intense anxiety around birth scenes, using crew members to procreate, and causes a shudder when we think about it choking Kane and threatening to kill him if it is removed “before it’s finished.” But even beyond that, it gets into even deeper social commentary when you realize that the ship's name is “Mother” and the thing with that parental name was what forced them into the position to be violated. (OOOOooh what’ll really bake your noodle is if you realize that the gender switching of alien violations means that "Mother" can actually be read as a social commentary on FATHERS and how they put their daughters into danger.) And you thought that alien mouth shooting out was just kind of cool. Its phallic...dripping...mouth. Okay, I think that point's been made!

That is subtext. On the surface it’s a movie about an alien with a second shooty mouth. Under that, it’s about much more.


Now there is a lot of subtext within B.I. that I could analyze, but again my goal here isn’t to write a master's thesis article about everything going on and put all my readers to sleep. Cages, birds, corsets, free will, religious imagery, and even the writers’ attempts at social commentary (which we will get to next time) all play into a deeper subtext that challenges the ostensible action on the screen. Once you get past the convoluted plot about multiple dimensions and the “what really happened” analysis, B.I. has so much more roiling beneath its surface. But in order to continue proving that video games
have the capacity to be real art, we need really only examine a single successful (albeit ubiquitous) symbol that is pervasive throughout the game.

So let’s talk about water.

You step into Columbia (having come from a lighthouse in the middle of an ocean) and you are literally inside a fountain. The water spills across the floor in a shallow pool, it flows down the
stairs in defiance of every reasonable safety precaution. There isn’t even a handrail! (I hate to think whose job it is to clean up the blood spatters and twisted bodies of everyone who slipped on this
breathtaking display.) Water covers the floor in not one, but two chapels with spectacular stained glass, and then you go down the stairs along a single walkway of waist-high water with candles floating in it. (Just consider for half a second the pragmatism of the upkeep of something like that.) Throughout the story, despite the fact that you are in a city floating miles above the earth, water is all around you—beaches, traitorous falls, near drownings, and of course the brutal end of several characters.

Let me point that out explicitly. In a game about a floating city—where it would be easier in every way to just leave water out of the game—the game designers took great pains to explain and put it in.
Dismissing its significance is absurd. A case can be made for water as a symbol for life or death or
even both simultaneously. Three major characters die in water. Being “reborn” within the waters of baptism is not only a major part of the plot, but is essential for Booker to enter Columbia (but not without saying he “nearly died”). And of course, there’s the unambiguous end in which both life and birth come from the single act of Booker’s willing but forced asphyxia at the hands of his own daughter(s). However, an even more interesting subtextual meaning for water is as an allegory for choice—the game’s principal philosophical conundrum, and we can track this by paying attention to how deep the water is during any given moment.

When Booker arrives in Columbia, he is confronted with a thin  layer of water over everything—and there is only one way he can possibly go to enter the city. In fact, he must be baptized within these waters “for that is the only way to enter the city.” Later it is during his plunge into deep water that he almost is free  of Songbird the first time, but he wakes up, on land and his first words are of Anna.

It is no coincidence that the water kills the songbird at an  almost comically shallow depth (for a construct of such ferocity). The one part of Booker’s life that he can’t seem to overcome to regain his agency and free will (“Songbird always stops you…”). But the deeper the water goes, the more choice he seems to have. Underneath the water’s surface, his agency is restored him.

Comstock is basically drowned in a few centimeters of water within a birdbath as a tender waterfall flows near him from some infinitely recycled source. Indeed, his fate was sealed the minute you walked in the room.

And of course it is Booker being plunged into the waters of  baptism, but held beneath them (a final moment foreshadowed during his arrival to Columbia), that is the only way to end the vicious cycle of becoming Comstock and building Columbia over and over again. He must let himself be held under the surface to find the only choice he can still make. Like Songbird, he is killed at an almost comically shallow depth (barely over his knees) and in doing so his agency is restored to him.

Even small details within the game mechanics themselves help to reinforce this relationship: the control you can exert over enemies via water with the Undertow Vigor borders on ridiculous.
This is also why in the scene that takes place in the deepest water in the game—a brief foray into the setting of Rapture (an underwater city) – Bioshock’s earlier incarnation – a moment of
truly infinite choice is opened up as Booker DeWitt casually uses a "bathysphere"—the use of which by Andrew Ryan is a major plot point of the original game and a genetically coded device.  (Now go back and look at the little sisters and Elizabeth again.)  In the deepest of water, the full scope of “infinite” within the Bioshock universe becomes clear as it is implied with almost diabolical subtlety that Rapture may be an echo of Columbia. Deepest water—infinite choices. [2019 NOTE: less "diabolically subtle" since the release of the Rapture DLC, but certainly at the time of the original article.]

Consider in this context the imagery with which the game opens. Literally leaving the ocean of choices behind by heading towards a lighthouse—a beacon that is ostensibly land jutting out from the water but also represents the end of Booker's choices and the beginning of Booker’s predetermined path. And in the end, you wind up back at the same lighthouse, walking across water (but unable to enter it) as you go from one lighthouse to another, the illusion of choice revealed not to matter, and the destination right back where you started.

Subtext?  Yeah, it’s got some of that

(Next time, I’ll enrage white middle class geeks everywhere as I talk about some of the ways Bioshock Infinite spectacularly failed in its quest to be politically and socially poignant and what that means to its claims of artistry. )