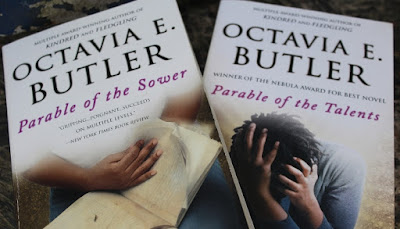 [Note: I'm getting some reports that the voting "widget" isn't visible to everyone. The place where I make my polls recently underwent some changes (I think they got bought out by a parent company), and they've been having some growing pains. Here is a direct link

Let me just make ONE caveat. This poll is about BOOKS. It's about writing. If you loved watching Alan Rickman play Marvin, but found The Hitchhiker's Guide to the Galaxy book to be trite and boring plot driven drivel with sophomoric humor, please vote for something else.

The actual poll is on the left hand side at the bottom, beneath the "About The Author" section. Mobile viewers will have to go aaaaaaall to the very bottom of their page and switch to "Webview" in order to access the poll.

There is no way to do ranked choice voting, so please consider that every vote beyond the first "dilutes" the power of your initial vote and use as few as you can stand to use.

I will probably run this poll through December and post results early in January, but that's a pretty busy time of year and it might go longer if it's still picking up new votes when I remind people about it.

[*There are separate polls for other time periods, including "contemporary" (2001-present). I had to break them down because the field was just to busy.]
at December 03, 2019