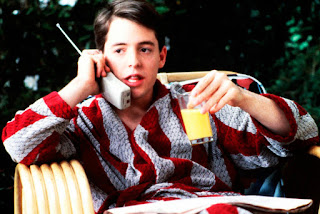 If you can't stand it every time I write a post to say that I'm not writing a post, give the ol' scroll wheel a nudge, because other than a few juicy details about my love life, you'll find nothing else of interest today. Today's post is not some "capitalism work ethic" post or even a guilty post to my Patrons that I'm taking a day off. (The only response I get to those anymore is "Take the damned day off and don't worry about it!") That said, this is a day where if I had a boss and time clock, I would be calling in.

And yet this post is one of the most important things I'll write.

I would tell them I'm sick. I wouldn't be LYING exactly (sticking to vague "I don't feel well"s is useful if you abhor lying), but I would be creatively stretching the truth. I might even throw a cough in there.

You folks....you get the straight dope.

I was just going to slip quietly into the weekend. I think there might be two or three people out there familiar enough with my update schedule to wonder where my "solid" Friday post went off to, but for the most part, I figured anyone watching that closely would know what was going on.

It's meta. It's navel-gazey. It's a little stream-of-consciousness. It might even cross the line into self-pitying. It's NOT a major craft essay on dialogue. But it's important.


And one of them is this: I want to show you how the sausage gets made.

It's so fucking important that you not think this is magic. That you realize that writers are neither soulless machines cranking out unfathomable word counts without regard to what's going on in our lives or that we're mercurial fae who flit from stimulus to stimulus until something "inspires" us and then we shit out entire books in a Squatty Potty unicorn rainbow sequence (with sprinkles).

The most common question working creative writers get is "How do you do it?/How can I do it?" or some variation. We are implored like there's some trick, some magic that we've learned, and we're holding back. I want to demystify that process. I want you to be able to literally comb back through the posts (if you should ever want to) and see the improvement curve, the evolution of audience awareness, the incredibly glacial process of building a financially-viable career as a working creative writer––going from years without a penny to pocket change to maybe a cell phone bill to part-time-job money to a job, but that has to be supplemented with a side gig––and yes, also the productivity lulls....all in real time.

Watch my productivity tank when The Contrarian comes along, when a loved one gets cancer, during the complicated and messy process of a major breakup with a kid involved. And these last few months as I've been overwhelmed by yet another baby and more hours than I can handle.

But also notice that even in the lulls, the posts (generally) go up. Notice that I keep grinding away. Notice that there have been no hiatuses and few vacations longer than a couple of days. Notice that I may not get a fully formed blog post written, but I write even when I'm going through the worst moments of my life. I'm not saying this to brag, but to point out that the discipline I cultivate when it's not easy is what leads to the ten-page days when I'm on a roll.

I don't stop. But also I absolutely have shitty days and blow off work. But I also push through more often than I don't. But I also can get overwhelmed during really super shitty weeks and I just can't tough it out. But even on those shitty days I write something (as you can see).