The Cost of Doing That Thing™ (Yes, We're Talking About the Kidney Post) 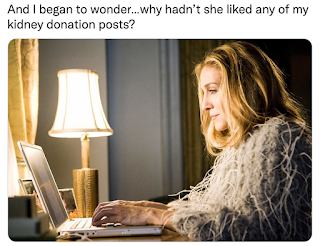 Here at Writing About Writing, I'm a little behind the "Issue of the day" curve. Where others have piping hot takes, mine are usually on the "extra chilled gazpacho soup" side. (That's "cold," in case Red Dwarf references are too 80s for you.) Somewhere in the archives, I still have a half written article about The Force Awakens. Just so we're clear what I'm saying, that's an article I started about the first movie of a trilogy that ended definitively almost two years ago…an article that ISN'T DONE YET. That's how long it takes me to get around to writing about some things—oh, I still intend to finish it.
Wait until I tell you about this Skyrim article….

But when I got asked on Twitter about my take on this New York Times article that I'd seen a bunch of people in my feed talking about (the article titled "Who is the Bad Art Friend?"), I decided to put aside what I was working on for tomorrow (today) and see if I couldn't at least drop something in the "luke warm to tepid" range for a change.

Should a writer be able to draw on anything for the inspiration for their writing?

Well…yes, but the reason this particular story has gone viral—other than the Jersey Shore level drama between the two actors—is because there's much more than just this question going on even if it doesn't look like it.

I read the whole messy sordid story (twice). At first my jaw was just on the floor, but then I really tried to think about what would be a useful lesson for writers. I also looked around at a few of the higher-profile responses to see what other people were saying. I don't want to add to what I've already seen about who did what, and I'm not going to bother trying to figure out which of these two breathtakingly inconsiderate people was more to blame.

I can't begin to untangle that trainwreck. It's like watching the first season of Schitt's Creek--you sort of just hope everybody gets hit by a bus.

I wouldn't even know where to start. There's so much culpability and bad behavior that it would be impossible to figure out where one person's assholery ends and another begins. Group chatting about someone behind their back is just bullying, awful, behavior, but it happens all the time, and suing over that… (I once became the Storyteller of a game with a heavy online component and was given access to the locked message boards, including conversations the former ST's were having about me. It was not flattering stuff.) Larson admits lifting text verbatim and not even changing it (which might not be legal copyright infringement, but it's definitely plagiarism—a no-no in ANY writing world). Dorland's inability to simply be pissed for a while that someone she thought was a friend was really (REALLY) not, and then let go instead of engaging in a sustained campaign of often litigious harassment and stalking panels and shit is petulant to the point of spite and rancor.  Obviously planetoid-size egos are at work here among both parties, one of whom seems unable to say, "I did do that, and I'm really sorry," and the other unable to say "I can't sue you into being a friend or a decent human, but I'm livid that you acted in such bad faith."

I'm NOT going to answer the question of who's the worst faith actor here. It is fundamentally unanswerable. Yikes on bikes all around.

But I want to point out something. Where to draw the line between being inspired by people and writing about them is a problem writers WILL have to grapple with, especially if they are borrowing from real-life events. And you can watch lots of people fall into camps about this. Writers will insist they can borrow from anything for inspiration. Anne Lamott famously said: “You own everything that happened to you. Tell your stories. If people wanted you to write warmly about them, they should have behaved better.”

Other writers will point out that plagiarizing exact turns of phrase is not "borrowing from ______ for inspiration." And a huge majority of fiction authors this side of Truman Capote will point out that you better NOT put a character in a book that someone can recognize as themselves. You just better NOT do that. It's bad jujumagumbo.

This is the same dynamic as when dudebro SQuiD's show up and want to know why they can't fill their books with shitty stereotypes, cultural appropriation, or problematic portrayals (like using rape as a gritty backstory).

Nothing is stopping them.

There is no stereotype, appropriation, or problematica police that will come and stop a writer from writing absolutely whatever the hell they want, and there are no enforcers deployed to investigate whether a case of "inspiration" has drifted into "unethically mining someone's life to wring a story out of it." Short of libel or copyright infringement, a writer can write whatever they want, whenever they want, using as many details from the lives of the people around them as they want. And based on what DOES get published every day by every publisher and bloats most mainstream book lists, no such writing would even be a speed bump in a writer's career.

See, what these writers really want—what they're REALLY asking for—is not the ability to do something.

It's the freedom from the consequence of having done it.

They want to never have to deal with anyone reacting negatively to their work in a way that makes their scalp itch or their fee-fees wibble. Ever. At all. They don't want to hear about it. Their ABILITY to write that was never in question. What they want is to never face an angry tweet or a pointed question at a Q&A.

And that is the same question that is really being asked in this situation.

As a writer, we already CAN take inspiration from any events we want. You already CAN take other people's stories and write them without permission. You can even write about a person who is clearly your spouse, drag them for every decision they made during their traumatic miscarriage, expose their secret habits, and reveal to their ex (who they're still really good friends with) that they were cheating (with you) for a year before the breakup. And as long as you don't name them and lie (thus committing libel), no one can stop you.

But I wouldn't bet the farm on your marriage lasting much longer.

This is the real question. It's not really "Shouldn't a writer be able to…." (They already can!) It's "Shouldn't I be able to do this without consequence?"

And the answer to that is…well, it's never going to be yes.

There are always consequences to writing. Always. Someone won't like it. Someone will be offended. Someone will take umbrage. You just have to leverage who you offend and how much against the things you want to get OUT of writing. I get death threats from time to time, but I'm not going to stop doing what I'm doing. People challenge me about what I write, and I pull up my big-kid Underoos and handle it.

I can't answer this conundrum for anybody but myself. (I would never write a recognizable event—I would always change enough details that it looked fundamentally different, even if I kept everything thematically identical.) Every writer has to find their own personal balance between bringing recognizable events and people into their fiction when they draw from real-life inspiration.

But I will warn you…

The second—the INSTANT—someone sees something they recognize in your work, they're going to be scrutinizing it to see what light it casts them in. If someone sees an event, they will be paying attention to what details you missed or made up. If someone sees themselves in something, there is a chance they will mention it, challenge you, get angry, become furious, or…(if they're a real piece of work) sue and low-key stalk you. Only by making things truly unrecognizable can you avoid people having personal reactions.

And the closer you get to an event or person someone recognizes, the greater the chance they're going to be watching very, very closely. And if events are identical (up to and including some of the exact words used), they are going to have every right to think you are commodifying their lives and to tell you so.

There's no way of getting around this. Invoking "it's fiction" when someone sees themselves in your portrayal is about as useful as saying "I didn't mean it THAT way" when you use an ethnic slur.

People have a right to react to your writing and if it upsets them, they have the right to tell you so. And while stalking a writer's panels and suing them is quite a bit extra, you don't have any special dispensation because you're a writer. Writers aren't issued a "hall pass" to negative feedback because "writers are allowed to draw on real-life inspiration." No one will say "Hey this really hurt my feelings and made light of some of my deepest traumas when I—oh I'm sorry. I didn't realize you were an artist. Please carry on."

So if you don't give a shit about whose feelings you hurt, then stick to your convictions when those people you've used for story fodder come knocking. Tell them to get over themselves, and maybe there'll be a career-boosting New York Times article about YOU some day. If you DO care (either about the people who think you are their friend or maybe just about your fellow humans with feelings), write with greater sensitivity for how the person might feel being the subject of your story, change a few more details, or communicate with the person.

Like most ethical questions, you're going to have to find your way on this one by yourself. I can't tell you what to do or if you should talk with someone or change the details of the story so much that they don't recognize themselves in your work.

I can only tell you what will happen (definitively) if you don't.