Numbers are climbing back up--even without me doing my uberpromoting.  I gained a little over 1000 page-views in May.  Still not back up to where I was in December but I'm also not writing two posts a day and spending two to three hours self-promoting, so my sanity doesn't mind. 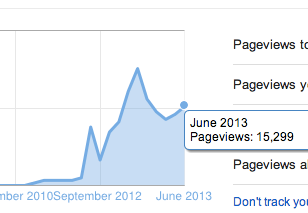 I'm going to put four articles in the This Years Most Loved for June.

The Mailbox: Revision Land did crazy well because of Amanda Paterson's Pinterest of a single image.  She's got a creative writing class she runs in South Africa, but also a number of social media pages that repost good images she finds from around the web--sort of like my Facebook page.  So having her put up something from one of my pages gets me a lot of traffic.  (I wish I could properly attribute the image, but I found it on Google as free for commercial reuse, and they often don't have artists' names.)  The article went from her Pinterest to Twitter and bounced around a bit on each--technically there are views still trickling in from both.  Anyway, that article's performance has been a bit of a fluke, so I'm going to put up the three top performers in addition to this one.

Also going up will be:

10 Words Writers Need to Learn to Use "Correctly"

Perhaps the most exciting news happened on the financial front.  Last month a very generous donation helped me get pretty close to $2/day.  I basically thought it was a fluke, and that I'd go back down to less than $1/day for June.

I made an unprecedented $15 on the ad side (proving that when it comes to page views, quality trumps quantity), and multiple smaller donations added up again to just under two dollars a day.  It's still chump change, of course.  It's still laughably small compared to the work I'm doing amounting to something like 25 cents an hour.  It's not like I could pay the bills.  But there's no denying that it's still creeping upward, and there's something kind of amazing about that.  My childhood dream is coming true--albiet in very, very, very slow motion.  If I can hold over the $1/day mark for another month, I may have to admit that it's not a fluke.
at July 01, 2013