[Remember, keep sending in your questions to chris.brecheen@gmail.com with the subject line "W.A.W. Mailbox" and I will answer each Friday.  I will use your first name ONLY unless you tell me explicitly that you'd like me to use your full name or you would prefer to remain anonymous.  My comment policy also may mean one of your comments ends up in the mailbox.  And I will even reply to replies of replies--that's how cool I am.]

All of today's questions are either emails or comment replies to previous mailboxes.

Super heroes have a lot of sex--even "behind enemy lines." The comic books don't even do it justice--not even the ones you have to be eighteen to buy. It's the seedy underbelly of the crime fighting world, and not a lot of people talk about it, but it's just one of those things that happens when you're dealing with ridiculously athletic bodies, spandex, outfits that reveal way too much cleavage, people who work out like twelve hours a day, and the occasional morally questionable super with the ability to control minds, kick out pheromones, or possess people.

Throw some Everclear in there and we pretty much drop our skivvies through the floor at the slightest provocation--and in Beefcake and The Ripatron's case, that's literally through the floor.

Just how we roll when life is short, 90% of us are double jointed, and most of our powers have some sort of way in which they could apply to our tongues.


I guess I should just set my world in some SF/F world so that I don't have to do so much research.

Be careful.  If you think your the sf/f fandom will go easy on you, think again. There is evil there that never sleeps. Think of those nerds asking the question about the ship design in Galaxy Quest or the Comic Book Guy from the Simpsons. These are the guys who point out that the Klingon translation for "attack" was different in Star Trek III from the Season 3 finale of The Next Generation (or whatever).  These are some very, very picky peeps. If you have the slightest hiccup in internal consistency or plausible world building, you will be torn asunder.  Not that this particular brand of nit picking is constructive criticism or difficult to ignore, but if you're worried about history wanks getting all up in your grill about inaccuracies, understand that these guys will be worse.

You're right though.  I transferred out of Diablo Valley College (where I now teach) with a 3.8.  I could have gone to UC if I wanted to.

I picked State  because the ratio of students was better, the classes were taught by faculty instead of grad students (except for a few survey courses), and because they had a creative writing program at the undergrad level.  (Berkeley does not.)

I very much wanted an education, and I didn't much care about getting a degree or how "prestigious" it was. State schools are less rigorous (I certainly wouldn't be Summa Cum Laude in UC Berkeley) which I knew meant they would be less regarded in the professional world, but they have a better reputation for teacher interaction, class sizes, and a flexible pedagogy.  Plus, I wanted to take a Creative Writing undergrad program, and Berkeley didn't have one.  UCs are more interested in whether their faculty are publishing and staying on the cutting edge of their respective fields and far less about how well they teach.

Since I wasn't trying to get into a cutting edge discipline, it wasn't really a tough choice.


I've been trying to establish a routine for writing for years now.  Words per day. Hours at the page. I use a computer without wireless.  I've taken all the games off of it.  I even have my boyfriend take the remote controls with him to work so I can't turn on the TV.  It doesn't matter.  Nothing seems to work--I always end up distracted.

I assume you've rounded up all the usual suspects like writing at a time that is good for you, and writing at the same time every day. I can't stress enough how much these simple things can help.

First of all, you should probably ask yourself--honestly and pointedly--if you enjoy writing or if you enjoy the thought of being a writer.  I hate to be the blunt splash of cold water on the face of your soul, but it kind of sounds like you might not really like writing that much, and if you would rather scrub the gunk out of the sink drain than write, maybe it's time to make some tough choices.  We tend to do things we'd rather be doing first and postpone things we'd rather not be doing.  Are you SURE you love writing?  Really sure?

Because on my BEST days, I have to remind myself that other things exist besides writing and books.  My eyes will be burning and my fingers aching and I will think, Okay, Chris.  That's enough. Time for some Skyrim.  Or put on Psych in the background and do the dishes.

However, if you really know that you really do actually like writing--or you're just not ready to let go yet--I have a couple of suggestions.  You seem to have a couple of good steps in getting yourself physically away from distraction.  Those are important.  Maybe I can fill in a few other things that might help.

1) Here's what I do when distraction is really being a brat.  I tell myself that I'm going to sit down and write one sentence.  Just ONE sentence. And hey, if I want to go back to whatever it was after one sentence, that's fine, but I'm at least going to write that one.  And when I'm done with that, I tell myself "how about the paragraph."  I'll take a nice long break after the paragraph if I really want to, but why not just fire that out.

Usually I can squeeze out enough from this to get the ball rolling.

2) Go ahead and let yourself be distracted--but only in measured, staggered breaks.  "In order to earn the right to watch Agents of SHIELD, I have to write one page."  Breaks are actually very important--especially if you're in that place where you're not on a roll yet.  (Once you're on a roll, fuck the breaks. Let loose the juice!)

Go ahead and give yourself a lot of breaks--one every fifteen minutes or so.  Don't feel guilty about them. Take them with zest.

3) This one might seem counter-intuitive, but you have to relax.  You can't let the stress from the fact that you're not working enough wind you up.  Eat right. Eat BREAKFAST! Get a good night's sleep.  Learn to unwind properly. (You might even START with your break and intersperse the writing between break times until you learn to do it the other way around.) Relax.... Stress puts our bodies in survival mode.  If you are in survival mode, it is very hard to concentrate, and that goes doubly for trying to be creative.

4) Set a goal before you sit down.  Know what you want to accomplish.  The more specific the better.  "Writing" is very vague.  But "writing five pages" gives you something tangible.

5) Break your big goal down.  (Maybe this should be 4b.) One mammoth goal is too hard. You will find a million things to do before "Write a novel" but "Write the first paragraph of my novel" is completely reasonable.

6) And this isn't exactly USDA approved, but almost every artist I know swears by it: caffeine. Don't treat your body like a bilge dump, but you can use it to your advantage if you're having trouble focusing. (I generally do not need it, but on my worst days, it helps.) Unless you have a specific neurological construction that is fairly rare among artists, you probably will concentrate better after a couple of cups of coffee.  Might be worth a shot if everything else is failing.  It won't take you long to learn exactly how much you need--for me it's two Starbucks Refreshers or a pot of tea.  Once I drink that much caffeine Starship Concentration will be leaving space dock no matter how scatterbrained I was prior.

These should do the trick, and if they don't...tough question time.


Do you ever take breaks from your writing?  I don't mean like little ten minute breaks, but like weeks off or something?

Sort of.  I take time off from the OBLIGATION of writing.  For example, I've taken a week or two off from the blog since I started it eighteen months ago.  If I am working hard on some kind of fiction, I may give myself a day or two off of that.

But I don't really take time off from writing.  I usually writing SOMETHING every day.  It might just be a half hour into a personal journal, but I rarely skip a day completely.  Writing is how I process and how I cope with a lot of stuff, so if I were to go more than a couple of days without , I would start to feel very ill at ease. I've actually dropped into severe depressions back when I was in school and too busy to write or before I established the habit of daily writing. Now I know better.


Oh my god!  You were married?

You should do a selfie--complete with "ironic" duck lips.  Do IT!!!!

I'm going to hate myself in the morning.... 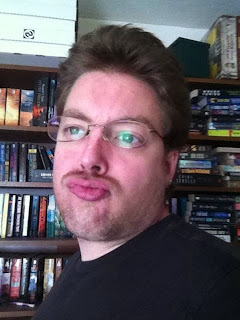