Look At Everything Upside Down 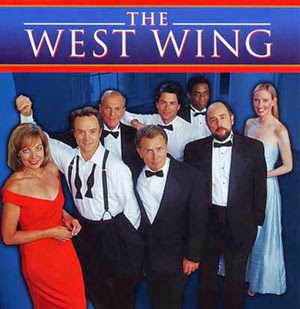 Part of having bad A.D.D. is that even when I'm not multitasking, I need to be multitasking.

When I clean the house, I like to put on a show that can create background noise without distracting me. If it's too interesting I'll get distracted, sit down, and watch it. If it's too boring, it won't help me focus on the cleaning and I'll wander off to find something shiny. Most shows I haven't seen before will distract me*, so I can't catch up on Doctor Who or check out Gilmore Girls (which I love so far). So I usually watch shows I've seen already. I recently got through House M.D. for probably the third or fourth time.

*Supernatural has been the only show I have been able to watch for the first time while cleaning. If I missed some dialogue, I just assumed Dean said "Sam, you're my brother," a few times and then one of them died.

I've been re-watching The West Wing lately since I've seen it two or three times. (Actually, technically, I've seen the first four seasons two or three times, but I always lose interest after Sorkin stops writing and the quality of dialogue tanks.) There's one scene that always reminds me of writing even though it involves no writers and has nothing to do with writing.

It's the scene with the Cartographers for Social Equality.

It is ever a reminder to me as a writer to look at everything upside down. Everything. Always.