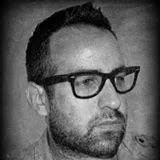 [Now that we have a handful of articles from Scott Jinx Jenkins, it's time to get him his own menu in The Reliquary. The text in brackets will disappear in a few days.]

Scott Jenkins was born September 1986 into a military family. He developed a deep desire for writing at nine years old, comprising several one page stories for his parents and classmates. 'Goosebumps' and 'A Nightmare on Elm Street' solidified his desire for the darker topics. After a failed attempt at college, Scott followed in his father's footsteps and joined the Air Force. His military career is highlighted with a tour as a Military Training Instructor, two specialty codes, and several awards and decorations. The Air Force offered Scott a second chance at college, which he took full force; he holds four degrees: the highest is a Master's degree in Creative Writing—and keen desire to use it. Now, Scott spends his days fixing aircraft in the United States Air Force and spending time with his wife and children. However, he spends his nights in front of a computer carving his thoughts to page; occasionally with a glass of single malt scotch. Scott has developed several courses for the Air Force, written blogs for MaintainerNation.com, and acted as editor for MilitaryNations.com. His first book--The Devil's Assassins--was released for digital sale in July, 2016 and print in September, 2016. This was the first in his, 'A Bloody Hell on Earth' Saga which encompasses three independent series': 'The Devil's Assassins', 'The Widow Forest', and 'The Wicked'.