Drowned in the Moonlight, Strangled by her Own Bra 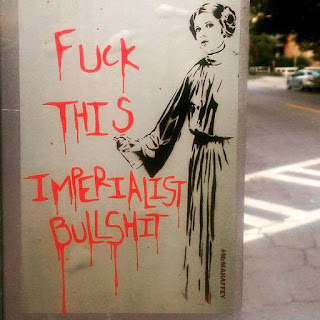 Continuing my glorious tradition of being absolutely behind the curve of popular culture, I am finally just getting to this post about some of my feelings regarding Carrie Fisher's death.

Though most know the story now, let me mention it one more time:

"George comes up to me the first day of filming and he takes one look at the dress and says, "You can't wear a bra under that dress."
So, I say, "Okay, I'll bite. Why?"
And he says, "Because. . . there's no underwear in space. What happens is you go to space and you become weightless. So far so good, right? But then your body expands??? But your bra doesn't—so you get strangled by your own bra.
Now I think that this would make for a fantastic obit—so I tell my younger friends that no matter how I go, I want it reported that I drowned in moonlight, strangled by my own bra."

Apparently what they did have was gold alloy bikinis. For some reason....


Because of my age at the time, my absolutely unhealthy love of Star Wars, and my relationship to my imagination (and the characters who inhabit it) that was, even then, a kudzu that occasionally sent long runners of overgrowth across my sense of reality. I never fell for the "little people inside the TV" trick, but there were a few worlds I remember learning weren't real only very slowly and painfully. Star Wars was a particularly enduring myth for me. I never really stopped wanting to be a jedi.

My mind has never been able to quite wrap completely around the idea that Carrie Fisher and Princess Leia were the same person. Of course I know it intellectually. Of course.  Of COURSE! But maybe......when you're not quite ten and the world of your imagination is still so real, sometimes you find those beloved characters irredeemably filed under a separate "listing" from their actors. I simply learned to love Han and Luke and Leia too early for me to ever be able to combine them with Harrison, Mark, and Carrie without just a little tiny bit of deliberate, conscious thought. 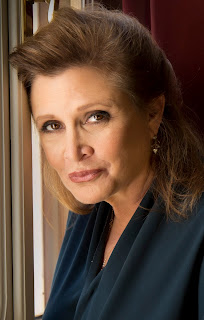 So Carrie Fisher was always this separate person, in a way.

I knew Carrie as a talented writer–I was still in early high school when I picked up one of her books. She was a superb example of how mental illness and addiction affect but never determine the arc of a person's life. And she displayed an unapologetically open honesty about her life, warts and all. Later I also came to know her as a feminist and a wonderfully outspoken critic of ageism and body shaming. She is on a short list of writers who, in bearing it all, remind me how exposed and vulnerable it SHOULD be to be an artist. How much courage it takes to be honest about one's shortcomings and moral failings.

Today I'm kind of glad for that disconnect though. I get get to have two heroes. General Organa will go on being as fierce as ever and fighting the good fight against space nazis in an ever more topical and relevant universe to our current situation. She will go on fighting for what's right in her own equally important and effective way while the boys go off and get their toxic masculinity on.

Carrie Fisher's light has gone out of the universe, but if I understand anything about her, it's that she met that end with an open honesty. More importantly, her words will endure. Her light helped kindle a million more flames that have become a beacon across the star filled night.