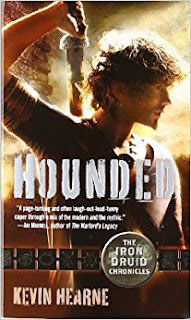 What is the best book or series written in the last 25 years?

Today we have a very interesting poll, and it is actually NOT the first round of the quarterfinals. We have some housecleaning to do on that master list, and a few titles that looked like they were gone are about to get a second chance.

If you've been following along through our SEVEN ROUNDS of initial elimination, you know that this poll overwhelmed me. There were WAY too many nominations and almost all of them got someone to give them a second and suddenly we had like 60+ titles and it's hard to make a list because some people are very good about checking to see if their choice has already been nominated and others are not. And the comments were a mess. And....*hitching sobs*

I'm crying you a river here. Be impressed.

It's my own fault. That "one nomination one second gets you to the poll" thing worked when I had fifteen regular readers, but now that these polls regularly get a few thousand page views each and are promoted on my Facebook page, where there close to 2/3 of a million, I really need to think of either smaller categories or the need for more than one "second" to make the poll (probably both).

The point is, I was doing a lot of copy and paste and not a lot of meticulous checking and we ended up with some redundancies on our master list.  (A couple of you noticed, and thank you for that.) Also it turns out Name of the Wind and The Kingkiller Chronicles are the same series. (It's on the list for years, but babies and loved ones with cancer and break ups and moves kind of make you take a pass on 700 page per book series.) I got all that cleaned up...I hope.

However, once I cleaned things up, we were about four titles short for a proper quarterfinal. So here's how this one works. I've gone back through all the initial round polls and pulled out the first cut off title (usually the fifth place title, but it was the sixth in a couple of places for various reasons).  All those books are on this poll.

You get three votes. The top four results will get a second chance in the quarterfinals.

There is no way to "rank" votes, so use as few as you can bare.

For those of you on mobile devices, I'm told that if you scroll ALLLLLLLLLLLL the way to the bottom, you can see the poll.

Note: If you see a title that is "breaking the rules" (older than 25 years–published before 1992) please let me know. I did not have time to cross check all of them.