"Why Didn't You Report It At The Time?" 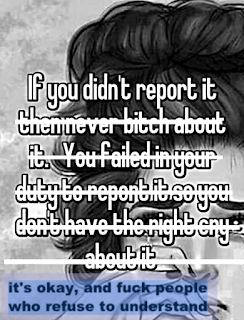 Dear fellow dudes (and a few others):

"Why didn't you report it at the time?" is a rape culture script.

These rape culture scripts act like a well choreographed dance. I say X; rape culture counters with Y. Like how anonymous reporters are never credible and named ones "just want fame/attention"––conveniently tying up ALL reporters with automatic, predetermined levels of incredulity. Move and countermove are all part of the dance.

"Why didn't you report it sooner?" is played like a "counterspell" in a collectable card game when dismissing any accusations over a certain length of time (as if the ones made the next day are taken any more seriously). It is merely THE script that gets used to dismiss any accusations older than a few days. (Just like "this will ruin their future" gets used to dismiss accusations from last night.) It joins victim blaming about clothing choices, citing prior promiscuity, pointing to intoxication, and sudden vigilant concern about a legal burden of proof (which is, unsurprisingly, comically impossible to achieve) in saying whatever it takes to blame and ignore survivors rather than their rapists. 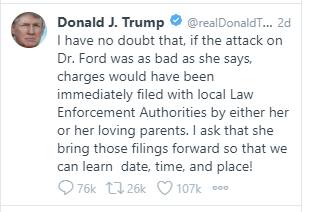 Rape culture ignores greasy-haired sheriff's deputies who gigglingly, mockingly wonder why you're "looking a gift horse in the mouth" when you DO try to report ("because guys always want it and can't be raped, amirite?"), so you just walk away feeling sick and try to move on with your life. It ignores partners who would pick fights about how you no longer find them attractive and wail-cry for hours if you wouldn't have sex every single time they wanted, so you started to just do it...for weeks or months or years...just to avoid that fight. You didn't know what basically anyone else would call that kind of manipulation until you were in your late thirties. It ignores the people who spend years afterwards joking about it ("Ha ha! You weren't taking no for an answer! Ha ha ha."). Because then your partner wouldn't have just ignored a hard no––wouldn't BE the kind of person to just ignore a hard no––and it wouldn't be what you keep thinking maybe it was. But secretly you wondered, as the months went by, and you felt less safe ever refusing because what if they don't listen again. Could you have or should you have said no louder, firmer, been more forceful, gotten angry, risked a fight when they didn't listen and just kept going––taking a physiological response for their answer instead of a clearly stated negative on consent.

Months and years wondering if maybe it was somehow your fault.

Rape culture ignores everything about what it means to report and about what those who do go through. Every. Single. Time.

The only thing someone is revealing about themselves if they ever ever Ever **EVER** use "Why didn't they say anything at the time?" is that they consciously ignored every single story that survivors took the time and energy and revisited trauma to share. Asking that question is the opposite of of a good faith query. Almost none are genuinely perplexed. Its only function is to be a cheap, passive aggressive "counterpoint" to quickly erase the report, dismiss the reporter, and the only thing it really reveals is that they weren't listening the first hundred or thousand times. They don't know because they don't want to know.