Types of Editing (The Very Basics) 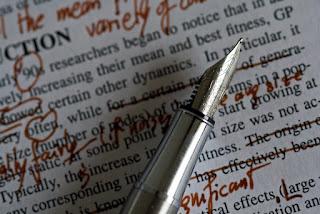 *That sound you just heard was everyone in the publishing industry clearing their throat. Though used 100% interchangeably in much modern vernacular and in most places that you'll try to find editors to hire, if you're elbow-rubbing in old-school or "official" publishing circles "proofreading" is often referred to only as the final pass before publication to catch the last of the mistakes before something goes to print. (It literally has to do with the proofs [or "galley proofs"] that typically had extra wide margins for notes, but are really not used anymore because the technology has changed.) In modern parlance, "proofreading" is a last step to clean up formatting errors and such. However, most people who aren't in the publishing industry mush the terms together and use them interchangeably (descriptive language being what it is) because they both become important at the end of the full editing process. No editor will be UNABLE to understand what you want if you ask them to "proofread" your manuscript (nor will they mock you for not knowing industry-lingo rather than using the word the same way every high school teacher on earth does when they tell you to "proofread carefully"). Strictly speaking though, proofreading should be only your very last step before publication (and looks for different kinds of mistakes) and is distinct from copyediting in that regard.
at July 19, 2019