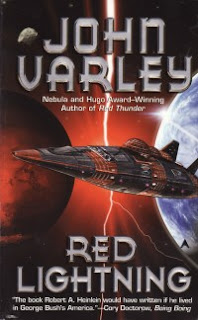 What is the best young adult book (or series) in the science-fiction genre?

The results are in! I don't normally post on Wednesdays, but this is just a quick results thing, so I should still be on track for the rest of the week.

From your nominations and recommendations have come these two lists. One of the best titles in the genre. The other titles that are not "best" but are great, but tragically less well known. Come get some great suggestions for your To Be Read™ list or journey over to the nomination page to see people singing the specific praises of each title and having a great conversation.

Thank you all so much for participating. I hope we get a little more engagement once folks sort of see how it works.

We also now have TWO of these results pages, so I need to get cracking creating a top level menu page where all the various results are posted and linked.

The Best (one nomination each)*

Succession (split into two volumes by the publisher) - S. Westerfield

Have Spacesuit, Will Travel - R. A. Heinlein

*There's an author/book missing. There's a reason it's missing. Its nomination comment has been erased. I will gladly explain if someone is curious, but the short version is that I have to draw the line somewhere on something that could promote the work of a living artist who is being actively and directly harmful to marginalized communities.