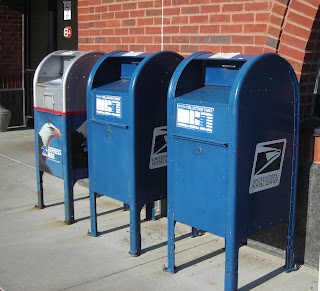 I am daunted by revision. What should I do?

[Remember, keep sending in your questions to chris.brecheen@gmail.com with the subject line "W.A.W. Mailbox." I will use your first name ONLY, unless you tell me explicitly that you'd like me to use your full name or you would prefer to remain anonymous.  My comment policy also may mean one of your comments ends up in the mailbox. It's okay if most questions are more like "can you assure me that this important thing is really important?"]

For context, I write primarily for pleasure and self-expression, but I also want to keep improving my craft and hope that any friends, family, or acquaintances interested in my work would enjoy them. I'm not aiming for a huge audience, so even a small group of fans, including friends and family, would be enough for me. If I do decide to publish, I'm quite content with self-publishing, especially as I have a number of good role-models who are indie authors.

As for my question, I understand that to write a good book, we need to do multiple rewrites of our manuscript, which is perfectly reasonable, especially as rewrites can help us make larger, structural changes to our stories. Yet, I have enough honest self-awareness by now to admit that I'm daunted by the prospect of doing all those rewrites. I am actually in the awkward situation where I have finished writing 22 books, many of them a part of a series, and I only have one completed series so far. My books are typically 300-400 pages long, with around 300 words per page, just to give you an idea of where I'm at.  Yet, I haven't rewritten, let alone fully edited, any of these books, so it makes me feel like a huge fraud. In fact, I wonder if I'm just making excuses for myself, believing that I'll eventually get to rewriting, but I take so long to write book after book, that I'll never get to it! The fact that I have relatively humble ambitions, gives me even more of an excuse to put it off. I know I technically don't have to do as much editing and polishing as a professional author would, since I'm not aiming to make money or to find a large audience. But still, I feel bad, like I'm not doing due diligence to my stories and characters. Also, it suddenly occurred to me: Tolstoy must have done multiple rewrites of War and Peace!!

Do you have any advice or suggestions for someone like me? To sum up what I wrote above, I'm not aiming to find a huge audience or to make money from my books; I just want to enjoy the writing for itself, keep learning, improving, and write good stories that friends, family, and any other interested acquaintances could enjoy. But I've hit a snag where I ought to do many rewrites of my work, yet I only finish writing a lot of books without doing much editing beyond some surface, sentence-level edits. So I feel like I'm secretly daunted by the idea of doing multiple rewrites, and am awestruck by the fact that Tolstoy must have rewritten War and Peace several times. I know this is eventually something I'll have to figure out for myself, since I'm walking a path between wanting to write professionally and wanting to write only for myself, because I do hope that friends, family, and acquaintances curious about my work will like my writing too. Nevertheless, any thoughts and advice you have on my albeit rather messy situation, would be greatly appreciated!

I want to make one thing absolutely clear before we go any further. 100% clear in a way that there can be no ambiguity, no misunderstanding, and nothing but Manini'owali Beach-water-clarity when I say this: if you have written twenty-two 300–400-page books, you are not a fraud.

You are a writer.

Maybe not published. Maybe not best-selling. Maybe not paid. But you absolutely ARE a writer. You know how many unpublished books I've written? Four. So maybe it's I who need to feel like the imposter here, Sieran.

That said…I do want to be clear that revision is a part of the writing process, and it might arguably be the most important part. It is the beating heart of QUALITY writing. So don't take this the wrong way, but it sounds like you have twenty-two rough drafts. Still not a fraud by any means. Still absolutely a writer. But if you want to write for money, audience (as niche as it may be), or fans, you have another step, and likely a longer, more arduous step than writing the first draft.

"God is in the revision," is an actual saying you will hear in the halls of literary fiction.

"Did you just…." Said dripping with indignance. "Did you just send me a rough draft? ME?" is more what this sounds like in the halls of more commercial endeavors.

Now, moving on to the rest of your question, let me just say that even though this is one of those refreshing questions of moderated expectations that is much less formulaic to answer than "how can I MAKE it," I can't actually answer it.

Here's what I mean, Sieran: even if you told me the EXACT number of fans you wanted to have and the precise amount of money you would want to make per book, I couldn't tell you how much revision you need to expect to do. You just have to imagine it's forming a slope on a graph with the X–axis being times revised and the Y–axis being quality of the writing. Some people are better at revision so their slope is higher and some people's slope is closer to one (a flatter line), but one thing will always be true as long as you are not destroying and completely rewriting your story like it's a sand mosaic: THE MORE YOU REVISE, THE BETTER YOUR WORK WILL BE.

Revise it once, it'll still be pretty crappy. Twice (with some editing) and you've got the level most commercial writers use as they pump out a book a year. Four or five times is what a lot of writers swear by. Then there are people who say the true story only really starts to come out around the 11th draft*. And all of these drafts are completely insular to the writer. This is before a single content editor takes a look or a sensitivity read or line editing. And then there's beta readers…and copy editing. Because peer review is part of the process TOO!

*Not a random number. This is literally the title of an essay about revision as well as the title of a book that is a collection of essays about the writing process focusing on revision.

It's interesting that you bring up Tolstoy. We actually know about War and Peace. It took him an ENTIRE YEAR and 15 drafts just to write the opening scene. He changed focus completely from the original intention of his work. He revised it even after publication in its initial forms as a serialized version and then six volumes (he pared it down to four). It took him six years to finish and shattered his health—he had migraines and got a terribad flu right as he was finishing that led to a LONG break from writing for a while afterward.

Even though self-publishing lets you maneuver around exactly as much revision as you want, the world is full of TERRIBLE self-published books by people who essentially didn't want to revise, and they didn't sell more than double digit copies, and even friends and family who shucked out a few bucks to be supportive smiled weakly and said "haven't gotten to it yet…but it's on my list" when pressed about what they thought. I'm not exaggerating when I say that you can literally tell some people did not want to hear a peer or editor tell them they had more work to do, so they just published their rough draft instead. And if you want to sell 37 copies (including five to yourself), you can do that. But most of us want to have a bit more to show for what is probably at least a year of our lives.

Thus….it's really hard to give you an exact answer, Sieran. The more you revise, the better the writing. That's just an axiom of writing… and really all art. It's like practicing as a musician or rehearsing as an actor. It simply MUST be done if the final product is to be more than an enjoyable hobby for oneself. If you truly want to be as small and niche as you say, you could probably keep it down to a full rewrite, a major revision, a tweaking read-through, and then the various stages of editing. But that's keeping in mind that you literally WANT to keep things modest. The writing equivalent of "I never want to be in any production bigger than my local community theater." Which is honestly and genuinely okay if it's absolutely in-your-heart true, but I wonder (and even "worry") how many people relegate their ambitions by convincing themselves they never WANTED anything more.

My truly unvarnished advice/suggestion would be to dig into the revision process and see if you can't enjoy it. (Personally, I love polishing something once it's drafted—the drafting part is the harder, more annoying part for me.)  Try to take it into the two rewrites/two major revisions range before you start getting all that editing done. You may even find you can see the improvement enough to really start digging that part of the process and take it closer to the 11th-draft level.

So when are you done? I can't tell you that because there's no moment when it has objectively happened. It is up to the artist to basically (no, I'm not kidding) abandon the project strategically when the process of revision reaches a point of limited return that they are no longer willing to deal with. When they are satisfied that it is good enough for the eyes of the world. When the process of revision is merely polishing the stone a little more and no longer removing glaring imperfections.

It's not an easy question to ask yourself, but as you finish up draft one or two, and the prospect of how much better you could make it looms over that instant-er gratification, you might find yourself feeling like Wedge Antilles fighting AT-ATs in a rebel T-47 light airspeeder (modified to be a snowspeeder):