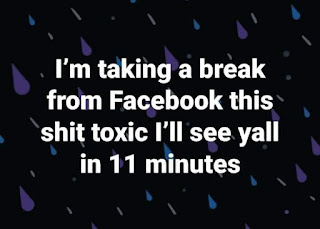 Welp. Apparently I did almost no significant Facebooking in late May—not that many memes but particularly very little writing that got shared (or liked by many).

But this is what I had planned for today since about last week at this time, so I don't really have anything else that I'm ready to post. I guess today is just going to be a little bit on the light side, and I'll use more of my time to keep plugging away on overdue Patreon rewards.

Protip for moderates (and no small number of liberals): If you expected me to sit through six paragraphs of explanation of why "corporations are people" doesn't really mean "corporations are people," sticking your fingers in your ears when someone tries to bring some nuance to what they mean by "defund the police" makes you look like the worst kind of hypocrite imaginable. 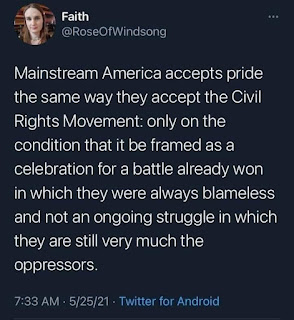 I think the most frustrating part of the far left is that I agree with them on almost everything and almost completely, but for the life of me they don't seem to realize that they TOO will have to govern a pluralistic society that has reactionary swings, and unless they are prepared to violently maintain an oppressive anti-democratic regime against MOST people in most parts of the country (the way the GOP does right now), what they really need to gear up for is an absolutely MASSIVE war of ideas instead of simply dismissing 95% of the labor class as not radical enough to attend the meetings and dismissing their struggles as unworthy while there's "REAL" leftism to be done. 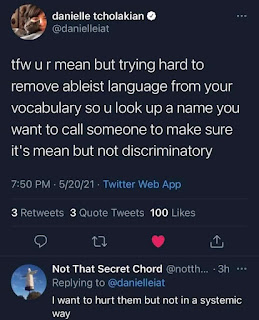 [This one is technically from 2017 during the 2016 general election postmortem, but I've still seen the argument floating around today.]

Us: “It’s the Democrats fault for picking a candidate that didn't excite me.” 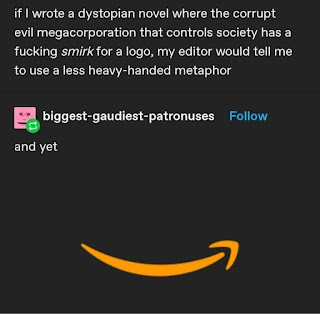