We're going to do something a little different today. Life got a little "on," starting in July (and it hasn't really stopped). Even though I've mostly managed each week to do a little better than the last, the July output still weird, and what I noticed when I went to do a two-week compilation was that at the top of the month (the 1st-15th), I did a lot of memes and not much writing, and at the bottom of the month (the 16th-31st), I did very little writing and almost no memes. So instead of breaking this up, here is the compilation for the ENTIRE month of July. 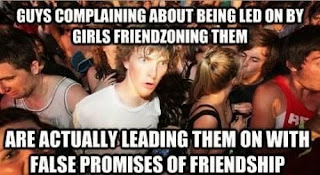 Trump was NEVER some "How-could-we-have-foreseen-this?" plot twist for The Right. As much as some people said they hated him, he was "their guy." He embodies the jingoism, xenophobia, racism (by ANY other name), and bigotry of  the modern right. 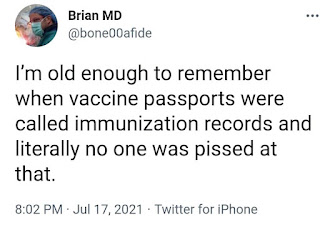 He is the Leader of the Republican Party and has been a Rorschach inkblot test of their integrity and principles. The embodiment of their scorched-Earth obstructionism, the incarnation of their do-anything-to win-ness, and the apotheosis of their scapegoating. He is an avatar for their belief that bigotry simply doesn't count if one merely denies the accusations ("I don't have a racist bone in my body!") , and the epitome of the belief that pointing bigotry out is what's actually injurious.

He is the quintessence of claiming anything that fails to stroke his confirmation bias must be "fake." And that lies aren't really lies simply if one repeats them over and over.

He isn't some mistake that the GOP are asking, "What have we DONE?" He is their final form. 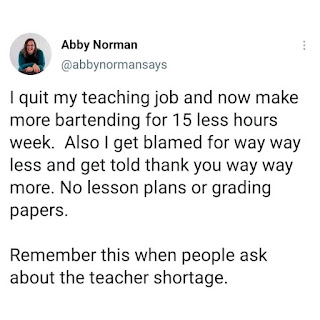 Unfortunately for everyone under 12 and their worried-as-fuck parents, the Venn diagram of people who CAN get vaccinated (important distinction) but refuse to, and people who will lie about their vaccine status so they don't have to wear a mask is almost a perfect circle.

I know what the CDC was going for, but I think they had a little bit too much faith in humanity, and didn't think that one through.

I can't begin to tell you how ridiculous you sound if you ignore literally all of human history until the 17th century and call capitalism "natural." Jesus, you even left out mercantilism. 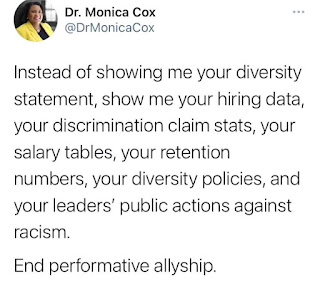 The idea that "money can't buy time" is usually expressed by people who can afford a fair bit of time-saving expenditures (housekeepers, a dishwasher, in-house laundry facilities, eating out, a personal vehicle).

Try living life without being able to afford a few of those things and see if you still believe that crap.Just say you like rather like organized exploitation as long as it's not you (and, uh, bad news on that front, pal....), and let's move on. 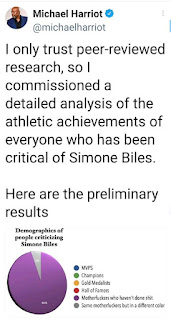 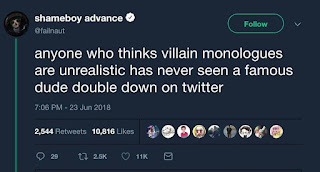