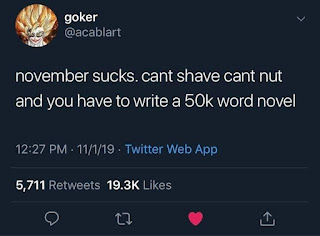 I'm way behind on posting these, but fortunately I wasn't writing much, so I can do two months at a time. By November, I knew I was sick, and the acceleration of the tests would lead to a cancer diagnosis by the end of the month. In December I had surgery (and a zillion tests and procedures leading up to it). I was really out of it both before and after the operation. So there were only a few gems, even across BOTH months.

Here is a collection of the BEST statuses (and a few of the most popular memes) from my public Facebook page over the period of Nov 1st-Dec 31st. (You're welcome to follow me there to see the not-quite-the-best ones, but read up in the Facebook FAQ [last question] if you want to send me a friend request.) 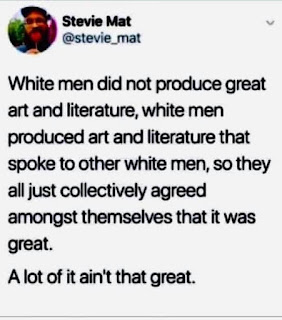 Look, I love me some Holy Grail and spam skit as much as the next nerd, but now that fully half the cast of Monty Python has come out in support of TERFs, can we stop pretending they were boldly reimagining gender roles and admit that the entirety of many of their jokes amounted to: "A dude in a dress." 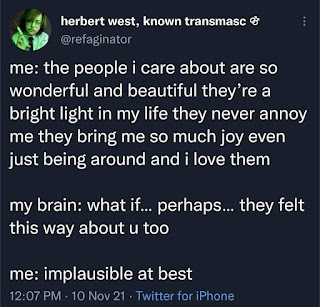 And once again, I'm going to NOT DIE because of the A.C.A. makes having insurance possible for me. If you're a leftist outside of a communist meet up, you might want to think hard about the optics of the message you're sending me (and millions like me) about the value of our lives by characterizing my reluctant but unswerving support of the Democratic Party as being "just as much a part of the problem." 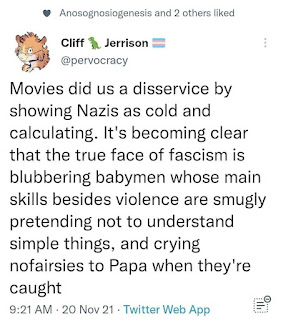 "You know, I used to think it was awful that life was so unfair. Then I thought, wouldn't it be much worse if life WERE fair, and all the terrible things that happen to us come because we actually deserve them? So, now I take great comfort in the general hostility and unfairness of the universe." 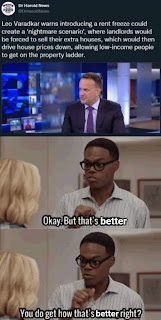 Looking up the first use of the expression of "a penny for your thoughts," an inflation calculator from 1535 (when it was first known to have been written), and a currency converter from pounds to USD, Rhapsody and I have determined that you now have to pay about $2.55 for someone's thoughts. 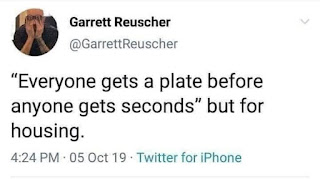 CN Weight loss…but not as a good thing.

Them: Oh my god, Chris. How much weight have you lost?

Me: About forty pounds.

M: I have cancer.

Best not to assume, folks. 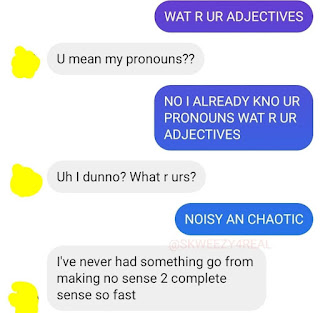 I cannot post every picture of this photo shoot we did for the little one I was expecting, but I will give you the link. It's a public post, so you should be able to see it even if you're not on Facebook.  https://www.facebook.com/chris.brecheen/posts/10160462668096015 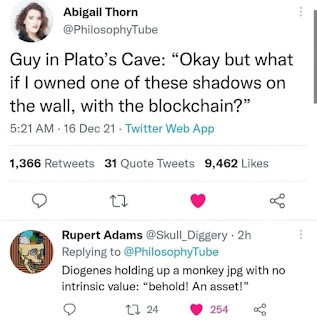 Today seems like a good day to kick cancer’s ass. 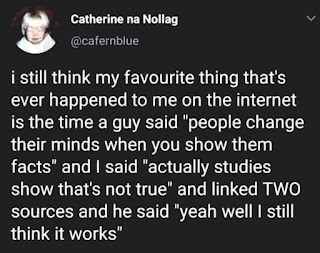 Hospital staff: Get as much rest as you can. Sleep is super important to your recovery.

Also hospital staff: ~wakes you up every 20 minutes ~ 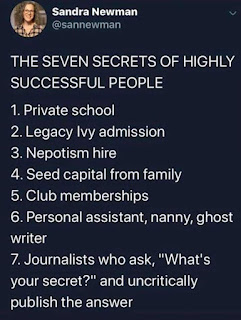 Anyone else get offended when the gmail predictive text accurately predicts what you were going to say and switch it out just to avoid being cliché?

No? Just me then? Just a writer thing?