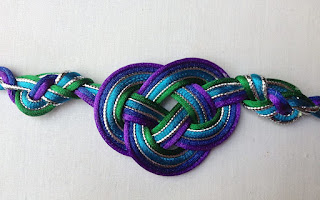 Quick Personal Update/Cancer Report-
You know what? Let's forget the cancer report this week. I'm doing okay for now. But did you know I'm getting handfasted to Rhapsody this Saturday?

We got engaged in Las Vegas in November (stopping just short of being total clichés). Because of some legal logistics and a pinch of restraint, we decided to do an extended engagement celebrated with a handfasting commitment ceremony set for a year after we first started messaging through my OKCupid. In a year and a day we will decide whether we want to remain on course for a legal wedding. (Likely!)

If you're following close, you know went to Disneyland last week. Overall, it was pretty awesome. Once or twice there was a moment where a ride breaking down or a line too long for a five year old to endure caused some stress. And I have a few choice words about the democratized fast passes being turned into pay-to-play "lightning lines" that bump everyone further back in the already egregious lines (and increase the estimate on line times by as much as 50%) because Disney figured out a way to hoover money out of people's wallets even FASTER. But fun was had by all, and by the end of the day, we were pretty content. As a crowdfunded content creator, I worry about every single day off I take (nevermind like three in a row), but I really needed a break from writing that was about something other than cancer and doctors appointments and surgery and "hey what's going on with your liver over here…?"

The logistics may have been cranky-making at times, but overall it was wonderful.

The handfasting ceremony we're doing isn't a wedding, and our guest list is small enough that you wouldn't need to take off a second sock to count it, but there's still quite a bit to get done. Guests are coming in from out of town. Cleaning. Organizing. Last minute shopping. So I'm combining this chaos with the fact that it is now MARCH, and I still have a handful of menus that need updating for 2022. I'll be knocking those out in the upcoming days. (They're important, but they take me a little less time than some of the posts I write from scratch.)

Not yet. I don't think I'm going to get any fiction done until after the handfasting at LEAST, but I'm starting to find the time in the weeks that once this moment has passed, will be open for writing.

I know I've been threatening the newsletter for weeks now, but this time it's really going to happen. I'm going to start the Inside Scoop newsletter too. I'm not sure I'll finish that one, but my goal is to have it done before the end of March.