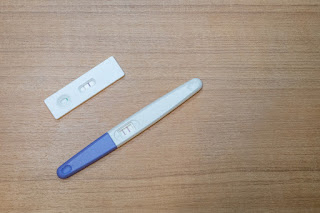 
I've mentioned in passing a few times that among the Big Things™ I've been going through over the last year or so, there was a pregnancy and a miscarriage. It was (just) after the move, but before the health issues that turned out to be cancer started. I have not been ready to write about that before now (beyond merely the fact of it). It was just too much. I could mention it—I could acknowledge that it happened—but anything more felt like it would crack a carefully constructed dam that was (usually) letting my emotions through in a (somewhat) more measured deluge.

Rhapsody and I weren't planning on getting pregnant. We weren't ready. There was a "maaaaaaaybe wait?" thought when I mentioned getting a vasectomy, but it was just so choices weren't done that were hard to undo. It was a "let's think about this" pause. If we did, it would be perhaps a year down the line (more like this summer or fall). But also Rhapsody has Treble and Clef already, and we were not sure about resetting the timer on having little kids around. (Treble can get the TV going and get themselves some breakfast instead of waking adults up, and that is a HUGE thing when you haven't had a good night's sleep in five years.) The timing was all wrong—we were still in our first six months, and hadn't figured out what our conflict resolution and non-NRE (new relationship energy) dynamics looked like. The money was too tight. Rhapsody's pregnancies tend to be incredibly difficult, bordering on traumatic. And we didn't know this fact at the time, but I was about to get very, very sick.

And yet…we decided to go for it. I have kids in my life, but I always wanted one of my own. I knew I would make a ridiculously wonderful parent. I was making the money for the first time in my life (from writing) to actually barely scrape by. My window for having kids—well it's really closed. I mean beyond the biological POSSIBILITY of it, it's really closed (I'm in my late forties). But I am in that brief moment just before it becomes absolutely ridiculous to be HAVING kids. And I've always been young for my age. We started to figure out finances. We planned the bedroom logistics. There were prenatal doctors appointments.

And then it was gone.

The world has this idea that because something is common, it shouldn't hurt. Because lots of people go through it, it's no big deal. Because a third of pregnancies end this way, it is no big deal. But Rhapsody added our due date (which would have been right around now) to three others that she will never forget. And every time she talks about it, people with uteruses come out of the woodwork to talk about just how intense the pain is.

And all of them have the dates they would have been parents burned into their minds. All of them.

We took a walk to a place Rhapsody has gone after her other miscarriages. We brought some symbols. We said a few words. We held each other. We cried. And it got better, but it didn't go away. I don't know if it ever will.

This is what I read aloud:

You were an idea
A potential future
A possibility
A thought so fragile, we didn't dare whisper it, or it might vanish
But you vanished regardless
Cast into an ocean of unforgiving statistics and biological realities, you never really…WERE
And yet ideas are alive
They may not have heartbeats or brainwaves, but they breathe. And their breath can build nations, crumble empires, build or destroy legacies, change the world, and transform lives utterly.
And so I stand among the crumbled empire of those thoughts too fragile to dare whisper.
And I grieve that you have vanished.
If there is a place were lost ideas go, I hope you find your way home.