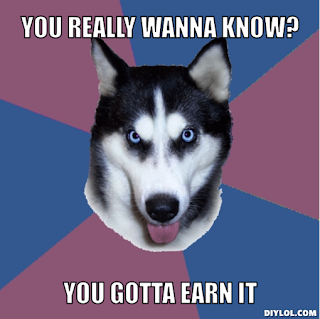 How to break the rules of writing within your writing...and get away with it.

It's not enough to say to a writer "Don't do this unless you have a good reason."

Every "rule" in writing is breakable.

Despite my philosophical divide with the pedagogy of SFSU, I really did learn quite a bit while I was there. I would probably not know how to torture lit snob professors by pointing out that canon literature is speculative fiction without having that education. At least not as well.

Plus there was a really good sandwich shop there in the cafeteria...

I must learn to intersperse my trash talking with poignant moments of self reflection. For all my quibbles, it was the best thing I ever did both as a writer and as a person. I did what I went there to do--I honed my craft. I wrote what they told me I "ought to be" writing, and avoided what their syllabi said they did not permit (that "evil trixie genre" writing) and I applied the lessons I'd learned to my own writing in secret–but first I locked the door, swept the room for bugs, and swore to them I was writing a short story about a bisexual Jew living in a halfway house who has AID, a meth addiction, and an unsupportive family.

Then I secretly worked on my genre novel.

One of the strengths of learning craft directly from people who have gone before you is that they can direct your efforts in a way that yields a greater return. Great writers can (and have) done nothing more to study craft than to read voraciously, and most writers (especially some of the MFA types) would do well to remember that before the 1950's or so, that (and maybe a mentor) was the ONLY way writers learned to write.

However, for writers like me with more passion than talent or skill, every improvement has been like passing a kidney stone, and the presence of instructors to point things out can help ease that transition.

One of the instructors it was my honor to learn under enjoyed collecting a mental tally of stories that "broke the rules."

There are a lot of rules in writing, and I'm not talking about grammar. Crack open most books on writing, and a deluge of rules comes spilling out: Don't write in second person. Don't be too abstract. Don't write out dialect. Don't TELL people how to feel.  Don't switch point of view in a short story. Write about a short period of time. Don't write in second person. On and on and on. Some of these rules get as specific as "don't write about little kids," "don't write dreams," or "you should never have more than one adverb per page."

And of course there are today's variations. "Vampires are overdone. Stop writing about schools of wizardry. First person is so five minutes ago–use close third. Quit thinking writing in present tense is edgy."

Not that this advice is useless, and a writer would do well to understand what they're getting into if they write a present tense book about vampire children at a wizard school who dream a lot. But any rule you can dream up has had unimaginably touching and deep fiction that breaks it–probably even canon literature.

Writers dispense rules all the time. Actually most artists dispense with the rules of their art all the time, and it's when some of the best works show up. (Most artistic movements are basically gaggles of artists flipping the bird to the last generation's "rules.") Still writing has always had this strange relationship among the arts with its own anachronistic advice. Somewhere in the mix of idolizing those writers who have "made it," it seems like advice from writers (even those writers we would never today want to emulate) takes on this mystical veracity that it doesn't in other arts or professions.

In a normal discipline, if a teacher tells you to always or never do something, there's this response that seems almost second nature to the students of, "Let's figure out why this is a rule so we can bend or break it." But writers have stuffed that part of their brain with Tennyson quotes and dirty limericks, so they don't always take this advice with respect and a grain of salt.

For some reason, writers tend to go all or nothing. Or they go the other way and just ignore it altogether and never learn why it where its wisdom comes from. Every writer is a special snowflake and their story is so fucking brilliant that they are exempt from traditional wisdom.  Because "if you really want to" or "unless you have a good reason" isn't even a speed bump when it comes to many writer's sense of their work's importance. So now you have a bunch of abstract second person stories about vampire wizard kids telling you how to feel and the writers don't really understand what the problem is because they are all convinced that their reason was a really "good reason."

Or they go the other way and take the advice as some commandment-level rule. Hating themselves for every perceived slight they have made against a set of advice by a 100 year old novelist who would never ever EVER EV-ER find an audience among today's readers.

What was great about this professor is that for pretty much any rule you could name, he had this mental list of a half a dozen stories that had successfully and beautifully broken it. Most of the stories were from authors that your average reader would recognize. He always had a sense that if you knew WHY something was a problem that was better than just trying to obscurely declare it to be so. So instead of spending his time worrying about what people shouldn't write (except....apparently when it came to genre) he instead had a catch phrase.


Do the work that can make the writing happen. Earn the scene. If you want a character to wax abstract about their feelings, it's going to take a lot of concrete details around that moment to ground your reader so they don't just feel like they're being ham-handedly TOLD what to feel. If you want to write about little kids, earn that by showing how major events can take on strange and different meaning to them. If you want to write in second person, figure out what the strengths are of that voice and earn it like Loorie Moore or Jay McInerney.

Write your vampire story. Even your sexy angsty 90210 teen vampire story if that's what your soul burns to write. But also learn why that shit is overdone and publishers are avoiding it and then bring a fresh perspective to the table as well.

Rules beg to be broken. It's like telling a little kid "Okay, I'm going to leave now–don't look in the closet."

As you grow up, your relationship with rules changes. You learn to measure things like risk and consequences and to carefully break the rules you don't like. (If you make sure everyone's really gone, and you don't leave any evidence, but also you accept that you might be ruining your birthday present surprise, you can look in the closet.) Most people who do illegal things (like drugs or speeding) understand this relationship with rules. It doesn't mean they totally ignore them just because fuck rules–driving 120 through a school zone or blowing pot smoke into a cop's face. But they do know when and how to get away with strategically ignoring them.

Writing advice isn't really any different. Ignoring it because "I had a good reason" or because one simply doesn't understand why it's advice in the first place won't make the prose any better or more readable. And following every bit of advice like it's the Code of the Writer™ will leave work stilted and unwilling to risk.

Instead when writers focus on doing what it takes to make successfully execute their problematic moments.

"Earn it" is so much better than many of its contemporary bits of advice. Forget the reason. Forget whether it was even a good reason.

"Earn it," casts off the veil of glamour and mystique about writing. There isn't some mystical force that will tell you when a reason is "good enough" to break a rule. This isn't magic that drips from your fingers into the pen or keyboard and spills out onto the page. What will get your from an unearned scene to an earned scene is not the pen of Poe or the finger bone of Shakespeare or talent or even having a really good reason. It's work–hard work.

Email ThisBlogThis!Share to TwitterShare to FacebookShare to Pinterest
Labels: Defending the Ivory Tower, Philosophy of Writing