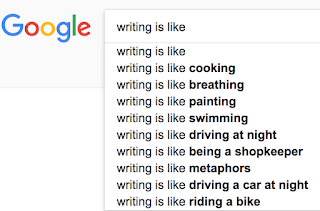 Sometimes when I try to tell people what writing is like, they look at me like I have grown six new tendrilly appendages, each ending in a tiny little Bea Arthur head that is singing "Achey Breaky Heart" as a round.  So I often use a metaphor to help illustrate it. "Oh, well, it's like X," wherein the value for X is some pretty wacky shit.  (This makes them look at me only as if I just told them I thought Hawkeye was the best Avenger, so I take it as a win.) Writers can be pretty zany when it comes to metaphors. Stephen King, in his book On Writing uses no less that half a dozen major writing metaphors from fixing a screen door to driving in the fog at night to unearthing the fossilized remains of a dinosaur.....that will no doubt come to life and eat children.

Why do we do this?  It's just one of those bullshit artsy things that bullshit artists do.  We find connections between things that most others wouldn't expect.  If we get rich and famous people find our imagination delightful and charming, and on talk shows they say things like "How did you ever come up with that?"

But until then, they think we're a little on the absurd side.

Writing is like WOW.  Consider your talent build carefully.
5 Reasons Why Writing Is More Like Driving a Car Than You're Probably Comfortable With
Art is the Keysi/JKD/Krav Maga of Getting Shit Done
Increasing Blog Traffic--Accumulating Tributaries
Talent: A +5 Sword That You Would do Better Without
Looking Back Down the Mountain
Writing is Like Flossing
at August 24, 2012

Email ThisBlogThis!Share to TwitterShare to FacebookShare to Pinterest
Labels: Ever Growing Lists, Menus, Metaphors About Writing