So the blog is about to celebrate its second birthday (TOMORROW!) and I'm kind of getting the hang of blogging.

One thing I don't do well is the cruise control of life.

Just about at any point that I start to feel like I'm getting the hang of life, I immediately run out and find another thing at which I can get in over my head. In what may be some great twist of cosmic irony, I have found the most miserable times in my life were those I coasted through.

This has never been about backpacking in the Himalayas or skydiving or learning to tango, and it has certainly never been about finding a better job, making more money, or advancing my career--well not the one other people think is "real" anyway. I don't want to impugn people who push their boundaries and envelopes in these ways--being human is about finding one's own meaning in life.

For me, it has always been about writing.

So Writing About Writing will be making a few course adjustments as it kicks off its third year. As a reader you can look forward to less bullshit and more awesome. 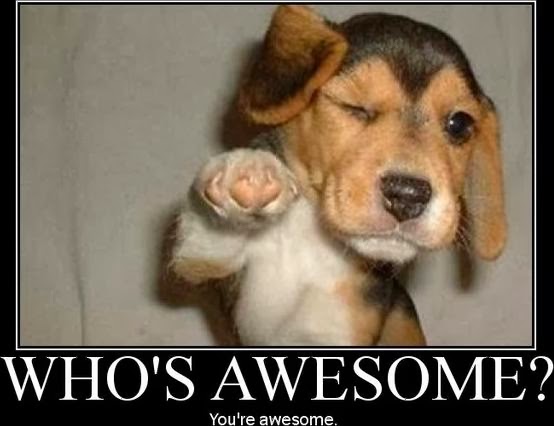 And let me take a moment to emphasize that this is because of all of YOU! I would not have the increased time to focus on writing if I couldn't have dropped one of the classes I teach. I could not have dropped that class if I weren't making about $100 a month from your generous donations (and some ad revenue). So it is all of you who have made this possible. It's not enough to pay the bills, but it is enough to give the writing a little more time and energy.

So all that more awesome is because YOU'RE awesome. And I found a macro of a dog who looks like he's pointing at the camera to emphasize that point.

So what does this course correction mean for me and the actual writing? I mean besides something vague like "less bullshit"?