Writing for Your Life (Marcy Kirkton) 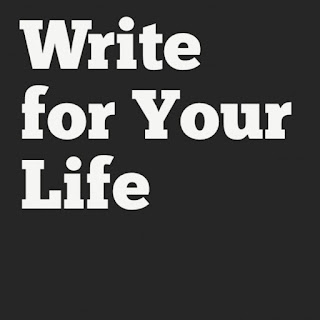 Writing for your Life
Marcy Kirkton

My mother (yes that "My mother") who went to the Iowa writers workshop, made six figures as a professional writer, and still puts two spaces after a sentence joins our recent glut of guest bloggers to help me get through bronchitis without ignoring the doctors orders to stop working 12-16 hour days.

In my late 30’s, I was living in So. Cal., going through a period where it seemed as though life  was boxing me in on all sides, and I decided to sign up for a kind of new age workshop in Malibu called, “Writing for your Life.”  I was mentally exhausted from a corporate communications job that demanded 60 hours a week plus for years, teens in the house who seemed mad all the time and mostly at me, a marriage worn thin by too little time for one another and too many challenges within the personal arena.  So I was looking forward to a renewing workshop, thinking it would tap into personal writing, which I loved, with a dash of new age psychology, which seemed to always be relaxing, supportive, and non-competitive.

Imagine my surprise when it turned out to be 99.9% therapists in the LA area who all hated their jobs and wanted to become writers!  I was the only person in the room who actually had forged a career in communications, and I remember feeling odd, since I was there because making a living based on my own writing had worn me down, while they were sure that it would rejuvenate their lives.  I knew that it would be a day where I kept my own experiences quiet.  Who wants to be the bubble buster?

Instead, I just did the writing exercises and tried to turn off the chatter in my head that kept yelling out rude remarks like, “Are you kidding me?  Have any idea how much effort it takes to polish off even one page of prose?  I do, you nitwit.  It takes 8 solid hours.”

See, I had my job as corporate communications down to a fine art of efficiency.  I had to look at a project based on some goofy corporate person who had an “idea,” figure out what they really had in the way of a project plan (usually not a lot), estimate what role communications would play (usually 90%), estimate how much I’d have to make up as I went along (usually over 70%), and then get to my real job of how much time it would take to shepherd the project to completion.  So I knew…...3 page brochure plus accompanying training materials plus project emails plus accompanying video script …..x amount of pages at 8 hours each plus printing time equals…….bam.  I’ll have it printed in color and video produced by X date.  I never missed a date.

Was it fun?  Sometimes.  Was it engaging as a career?  I enjoyed it.  Was it stressful?  Always.  Was it worth it?  Definitely.  Would I do it again?  Absolutely not!  By the end of my own career, I was dreaming of any job where I could simply talk and not have to commit a word to paper.  I thought about all of this as I sat in my new-age workshop with 20 women who were sure that writing would be such a fun way to make a living.  If nothing else, that workshop gave me an opportunity to reflect on my own life choices and how we all probably think the other guy has it easier.


I began my own journey with a crazy idea.  I decided to take my third rate university degree and apply at a prestigious writing program at the University of Iowa.  They only were accepting 20 people, and I was sure I’d never been accepted.  After all, I just had an English degree from Arkansas State University.  I took the exams, turned in my essay and, to my surprise, was accepted.  It was an experimental program:  Expository Writing.  Half of the degree focused on writing and half on teaching writing in college.  The program was made up of students from both the masters and the Phd programs, so the classes were always stimulating and competitive.

The University of Iowa writing programs are the granddaddy of all writing programs, based on workshops for the most part.  We were in workshops a lot, and I never found them to be very fulfilling.  When relying upon students to really study a piece of writing to offer feedback, the expectation should be quite low.  Truth is….nobody did much preparation and the feedback was off-the-cuff.  Where I learned the most was, oddly, in a class that was based on imitation.  We wrote essays in the style of various essayists.  By doing so, I discovered those techniques that  I could use to strike an expression or mood or emphasis.  It was invaluable.  I still think there’s no mystery why early novels are often imitative.  It’s a time-tested method of learning, regardless of the genre.

The classes on teaching writing were exceptionally interesting, focusing on creative processes and methodologies that were actually unsuccessful but still widely used in teaching composition, innovations that were taking place in teaching composition, and my favorite of all, linguistics.  All in all, the writing program was completely absorbing, and I loved every minute of it.  I was always surprised when others were grumpy or critical about the degree program.  I personally was so grateful for the opportunity and still think of it often.

When I left, I knew that  I really wasn’t interested in teaching.  I wanted to make a living writing.  Knowing what I wanted to do was worth every penny spent.  The other huge benefit was that all I had to say was that I was from University of Iowa graduate writing program, and I was guaranteed an interview.  Never underestimate the power of a big name school.  Notice I didn’t say I left a good writer.

My first job as a writer was for a textbook company that wrote the technical track textbooks for NYC high schools.  My job was to write the front and end matter and the workbooks that went along with the text.  I got paid by the computer block of finished copy, so editing didn’t count.  If you really want to learn to write with fewer grammatical errors, I suggest taking a job like that.  Time was money.  The job was great fun, since I mostly had to make it up.  I had no idea what teachers really needed to teach.  I just went by my own memory of workbooks.  When it was accepted, I was amazed.  That was my first lesson in professional writing.  You really don’t need to know what you’re doing.  I wrote some workbook about a chapter on electricity.  Trust me, I know how to turn on a light.  That’s it.  But I learned, just imitate someone who does know, get close, and you’ll figure it out as you go.  By the end of that job, I was copy editing books on computer programming with ease, although to this day, I haven’t any idea what it was about.  The technical guys knew, though.  They were happy, so I was happy.

I averaged minimum wage at that job and felt so very proud!  It makes me laugh now, but it was such a huge rush to be paid for writing.  I felt I had beaten the odds.  Besides talking about the professors, the second most popular topic among the students were all about how we’d never make a living writing.

My next job was more interesting.  I was writing policy manuals and handbooks for human resources.  In that job, I got to spend time researching, and I found I liked writing the best when I actually knew what I was talking about.  My first big piece, explaining to thousands of employees how the new Family Leave Act would affect them,  I confused every single reader but my boss, who had approved the release.  We both had egg on our faces and scrambled to repair the damage.  Lesson two:  Audience matters.

My work there led to a step up on the corporate ladder.  I was put in charge of writing all human resources materials.  That introduced me to “writing by committee,” where multiple mid-level managers reviewed and edited and  an endless parade of young corporate lawyers who took readable copy and turned it into legalese.  (I am convinced they believe that confusion discourages lawsuits.).  Writing by committee….. must be Dante’s 7th level of hell for sinful writers.  What I gleaned from that experience was lesson three:  Build credibility fast so you can cut out the committee.

But, that job did offer some great stuff, too.  My office looked out on the Hollywood sign, had three windows, and I got to have my own parking space in a garage that offered even car wash pick-up and delivery service.  Oh, and I got to eat lunch in the executive dining room.  Never underestimate the power of perks.  They go a long way to building patience with other challenges that might make you testy.

From being paid by the block to a private office on the 18th floor with big windows…...I had arrived.  Actually, I did a lot of manual collating, but it sounds so much better when I tell the story the other way.

All these stories and more floated through my mind that day in the workshop.  I wondered if any of the wanna-be writers in the room truly would even want to know what really a career in writing entails.  Whether you’re writing a novel, a play, a poem, an essay, a college textbook, a brochure on disability life insurance, or a blog…..the process itself shares common ground.