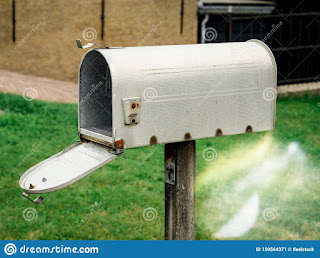 Why don't I (Chris) care about grammar?
[Remember, keep sending in your questions to chris.brecheen@gmail.com with the subject line "W.A.W. Mailbox." I will use your first name ONLY, unless you tell me explicitly that you'd like me to use your full name or you would prefer to remain anonymous.  My comment policy also may mean one of your comments ends up in the mailbox. I'll even tackle tough questions like what prescriptive grammar and racism have in common.]
Just a note before I jump into this question. My queue of questions isn't EMPTY, but I can kind of "see the bottom," and like a cat, I'm absolutely sure that this means I will soon run out and perish. So if you've got questions for me, now's a good time to send them.
Lex asks:

Why don’t you care about Grammar?

lolwut? I R totes gram-fan, yo.

What in the world gave you the impression that I don't care about grammar? Is it all the grammar mistakes I make? Because I've been seeing an editor about that. We've been working together. I've made a lot of progress on my problem. "Hello. My name is Chris and I'm really sloppy with my commas."
Oh wait. Is it the fact that I refuse to be an elitist shitgibbon about mocking memes with typos or people who use non-standard grammar? That I point out that prescriptive grammar fits into an invisible system that reinforces a colonial hierarchy of English in which there is one "best" form of English—that literally comes from the same place that started all those colonies—and any non-standard grammar (particularly if used by people of color) is considered to simply be flawed or "wrong" even though it follows linguistic rules and has a system of grammar just like any language or dialect? And that I point out that what is right (or not) is usually both enforced by people in power as well as becoming one of the ways they maintain that power?
Because at least one of those, I'm probably not going to apologize for.
Ironically, most people don't actually know the best form of English, or at what point in time they would like to "freeze" the inexorable march of linguistic drift. ("Sunday Sept. 18, 1983! Everything that changed in English before that is 'Duh, of course language changes and evolves.' Everything that changed after that is just made-up shit by kids who need to get off my lawn.") If they are from the U.S., they probably do not have a style guide they go by or know all the modern updates.  Actually having a metric for embracing new grammar guidelines and rejecting others would be complicated and would require some sort of forethought and conscious standard rather than just a snap judgement and feeling of superiority. They probably "salad-bar" the rules, taking what they like and deeming the rest to be the work of knaves. Mostly they just go by what they were indoctrinated with during high school and consider everything else to be a mistake of some level or another.
Perhaps worst of all (and most ironic?) is that this strict adherence to some grammar rules they locked in when they were teen-agers does absolutely nothing to enhance comprehension. They correct perfectly clear meanings and assume incompetence or stupidity, rather than ask for clarification, when meanings are unclear. Like most rules imposed by the ruling elite, they are only there to use as a cudgel to prove how backwards the people are who get them wrong. ("Oh my. You're not going to listen to THEM about privilege and marginalization, are you? Not when they end sentences with prepositions and their grammar—IF YOU COULD EVEN CALL IT THAT— uses a copula deletion of the verb 'to be'.")
And through it all, people never seem to notice that they are falling into one of two traps.

EITHER they are pulling the "My way of doing the religion is the only right way" move of thinking American (or British or Australian or….) is the most "correct" and the other main forms are either quagmired in antiquity and need to join language in modernity (if it says their own linguistic drift is incorrect) or are some bastardization that cannot be allowed to go unremarked upon (if it has drifted linguistically from what they themselves do)—each mostly dependent NOT on some sort of actual rubric, but simply on whether it agrees with what they learned in high school.

OR they have one idea for a "correct" form ("The King's English," basically) from which all other 160(ish) linguistically recognized English dialects are simply more or less error filled. Usually while failing to notice that the further one gets from the British Isles, and the more the people speaking the dialect are not white, the more the language is appraised as "impure" and lacking.
All while those who study linguistics are jumping up and down and screaming that every variation/dialect is valid and follows perfectly rational grammatical rules that just happen to NOT be in exact agreement with what rich white guys (mostly from England) think is proper. 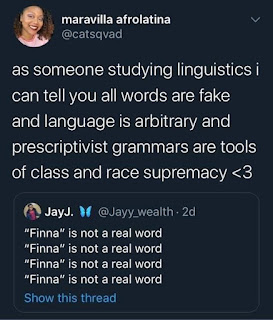 Do you…maybe….kind of….see how this….fits into broader contexts of classism and racism (and really most bigotry)? Now that the face of racism has changed from simply saying, "Of course X people are inferior," it gets rooted in an ethnocentricity that (big shock) only the colonizing and privileged powers live up to. (And you might not know this, but a lot of post-colonial cultures revel in how "bad" their version of their colonial language is.) People in power declare that the way they do life and living is the "right" way to do it, and then reject anyone else of being worthy of giving them input on their rubric*. So, no, of course, they're not RACIST, they just think upper-middle-class white people culture is the best. This is true even when it is only the privileged culture that really has access to the things they've deemed important.

*Oh and by the way I'll be scrutinizing everyone who isn't white for ANY possible deviation I can point to discount them, and white people will get a pass. A double-standard phenomenon you actually see MORE acutely among Anglophones when it comes to non-standard grammar.
Anglophones really ought to know better too. English history is rife with anglo-saxon contempt for French and the former's steadfast refusal to assimilate during the Norman conquest. But the cultural IDEA that the French side of the language was more "proper" stuck around even after the Normans got booted, and a thousand years later we're still playing the "one true language" game that they taught us.

Now this isn't to say that a writer doesn't need to concern themselves with grammar. Writers have to care about grammar. They have to. A writer who doesn't care about grammar will not be taken seriously by gatekeepers (if traditionally publishing) or by readers (if non-traditionally publishing).
And most writers who want to write in English are going to have to care about standard English if they want their words to be fully and easily understood by most Anglophones. Standard English dominates academia, professional writing, and most literature. At the very least they need to be able to write most of the grammar mostly according to standard English MOST of the time. (If you're using one comma rule from Cambridge and one from California or Hacker, no one is likely to notice except maybe an editor.) Yes, it's possible to write an entire work in nonstandard English, and some very successful works have been, but these were always conscious and considered decisions on the part of the author, and those authors almost always could code switch between their dialect and standard English without any issue AND have enough confidence to look at their editors or agents or publishers and say, "I did that on purpose."
But knowing that version of English—standard English—doesn't make writers better. It just means they know the version of English most often spoken by those in power. That isn't something that they need to be running around acting like pedants fartlickers about. And this writer doesn't try to lord that knowledge over people who make mistakes from time to time or have learned a nonstandard dialect.
I mean, how would I feel if STEM folks snickered derisively about how worthy I was to pay any attention to when I failed to solve an equation with more than one variable?
at September 30, 2021