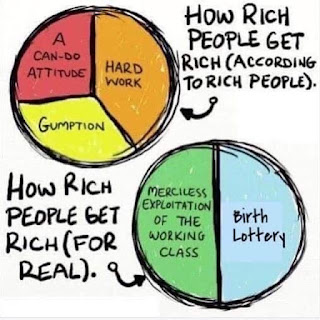 Just a thought, but if you look around the world and think, "Man, everything is SO messed up!", then maybe you shouldn't be so quick to harshly judge those who question the status quo. 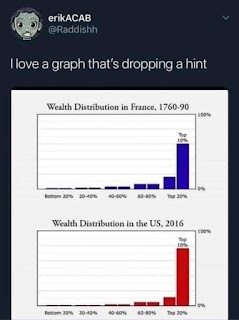 I place a high value on the truth and try to examine closely the places where my cognitive dissonance is likely to live, but the history of my species is replete with examples of people who believe, fight for, die for, and kill for things that are *demonstrably* not true. This history includes STEP BY STEP PLAYBOOKS, ACROSS MULTIPLE CULTURES, ON HOW TO GET HUMANS TO DO THAT EN MASSE––written by THOSE WHO DID SO, so forgive me if I treat your snotty-ass premise that we're merely going to fact check our way out of the modern wave of white nationalism as suspect. 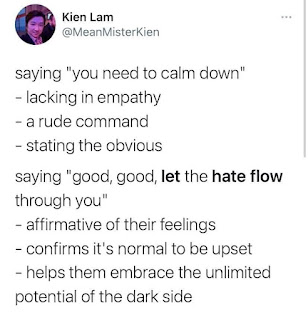 The reason conservatives are using the rhetoric that we're going to police their bodies and force them to take the vaccine under threat of direct violence is because that's what THEY would do. (A narcissist's accusation is always a confession, and the modern conservative party is a macro social abusive dynamic.) In fact, that IS what they do if given the opportunity to wield power. They have no problem policing uterus-havers' bodies under threat of violence.

But that's not actually what's at stake. When it comes to the rest of us, if they want to opt out of the social contract, they can. We just don't want them in schools…or Disneyland…or at concerts. Or getting people who CAN'T get vaccinated sick because of their their own pig-ignorant decisions that, yes, we ARE going to point out are amazingly foolish and selfish beyond the telling of it. 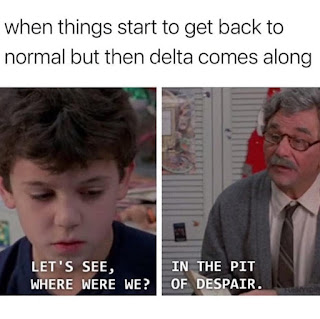 Our job as privileged people in this part of the world is to listen to voices that white cis het males usually marginalize.

Ally: "Absolutely. That's the name of the game. Ally4lyfe!"

To trust that sometimes folks who experience bigotry in the forms of discrimination and even violence can perceive what harms them (sometimes inadvertently) in a way we can't.

They know better what hurts them and fits into problematic patterns even if that was not their intention.

Marginalized folks: "This seems problematic, and here's why..." 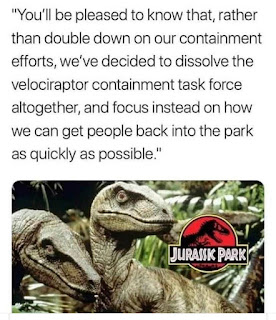 It's kind of revealing to me that people find my social justice posts "too loud" or "too obnoxious" or "too aggressive."

I rarely talk about social justice in person or on others' walls unless asked. I never go looking to point out that your fav is problematic or police language on other people's walls, and even here I may limit it to something like "I agree but please don't use that word." I arguably don't even lay down enough smack here when people are defending harmful jokes, because I'd rather try to find some touch point for understanding. I certainly don't corner friends at parties or shout on street corners. I speak up, but only at rape jokes or unapologetic slurs, and usually then only when we're alone and I can bring it up so very gently. The last time I brought up a point on someone else's wall, I was tagged and messaged by a friend who was sort of asking, "Can-you-talk-to-them?" The last time I had a conversation explicitly about social justice was maybe three years ago with a friend who had decided he was a feminist, and had a question about what turned out to be intersectionality.

I've also backed WAY off from several times a day putting up things that would fit under a "social justice" label. I've adjusted the "air/fuel" mixture to a lot of personal updates and geekery. I did so for my own mental health (though that's a more "in person" conversation). These days, even if I'm wound up about an issue, I usually don't even post half of what I used to every single day.

So really, the only thing these people are talking about is a couple of posts here on MY wall within my own space, to those who choose to listen. Folks can push one button to unfollow, unfriend, or block me or simply scroll on by those posts they don't like and get on to the silly stuff and life event updates.

This is what is "too loud."

The only way I could be less "aggressive" would be if I were silent. If I said nothing at all and simply "cared" about equality while allowing its utter failure to go unremarked upon day after day.

Which is, of course, exactly what they want. 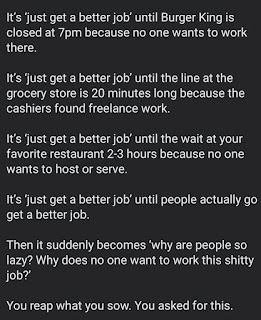 Of course people know it's uncouth to come right out and say "I'm smarter than you," but you watch closely enough and you see right away who walks through the world under the assumption that everyone else has something to learn from THEM, but that they don't really have anything to learn from anybody else.

But if you want some revealing homework, take note of how often those people are white men from rich parts of the world with a little bit more money than average. 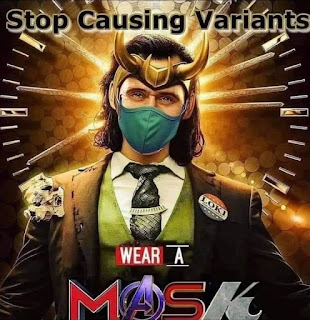 There are far more efficient and effective ways to go after things like trafficking or exploitation than making it hard for legitimate sex workers to get paid. Targeting websites in a way that actually endangers sex workers is demonstrative of an economic system that—far from being about supply and demand and invisible hands the way such slogans are parroted as the "natural" outcropping of unfettered capitalism—will actually unswervingly act to support the power structure (mostly patriarchy in this case), and punish anyone making swift, clean, and decent money selling what those at the top of the social hierarchy believe they are simply entitled to. 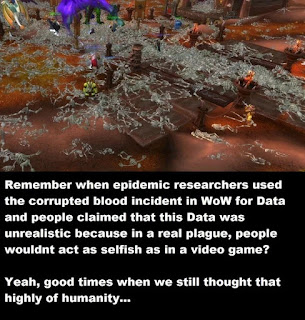 The FDA's approval of Pfizer has demonstrably proven what we knew all along. Antivaxxing isn't about healthy or legitimate skepticism or about waiting until it's not "experimental." It's about whatever sounds plausible and easiest to argue when being antivax. It's about knowing exactly what you sound like when you admit, "Nothing will ever sway me because I've invested my entire identity into this."

Keep that in mind when the goalposts move to "I don't trust the FDA." Or "most vaccines have been tested for years." 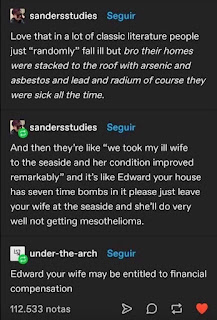 Can you just admit that your personality prioritizes "Don't tell me what to do!" over care and concern for vulnerable people and society, and save us all the embarrassment of you pitting your high-school-science knowledge against the FDA's testing integrity and thinking that a YouTube conspiracy theorist is a valid source.

The page turned, and I moved on with some rather spectacular bridge burning*, but it was one of the best chapters of my life. Capital decision.

(*I called out an admin who was denying teachers our promised raises, had gutted our materials budgets, and was guilting us for bringing it up by invoking the underprivileged kids the program served….…all while not mentioning that admin costs had mysteriously tripled since I'd been there. And then I CC'ed the email to all the other teachers.)

THE LAST ONE IS AN ADDED COMMENTARY ABOUT THE FOLLOWING THREE-YEAR MEMORY:

Oh dear. I didn’t expect this.

I first came to DVC in 1999, took two classes in philosophy, but then ended up getting promoted at my serving job and managing restaurants for a couple of years. I returned to DVC in the summer of 2005 after some write-for-a-year-and-try-to-open-a-restaurant-with-a-slumlord shenanigans, determined to kick ass, transfer, get a degree in creative writing, and continue forward with my dream career.

I kicked all the ass. I got a 4.0 for the rest of my time here, cranking out one bullshit class that wasn’t writing after another. 10-, 12-, even 16-hour days BART to bus to campus and back again. I got grants and scholarships including one that DVC only awards to one person every year. I was recruited to tutor and then supplementally teach English.

I transferred to SFSU but continued to work at DVC. Back then it was my only job except for a few hours of housekeeping for the folks I lived with, and perhaps the sole reason I didn’t starve to death living on Pell grants and scholarships.

SFSU was a great school, but I was in and out without any fetters. I graduated in 2012 after some four years of plodding upper-division work in creative writing. I took as many classes (over what was needed for a degree) as they would let me before cutting off my financial aid.  (144 units as it turned out--or basically an extra year of Creative Writing classes.) I kept my head down, took the classes, and wrote. I think there's one professor that might really remember me––I took him several times.

I kept working at DVC after getting my degree while I began to carve out a writing career in blogging. First, four classes a semester. Then three, as I established some writing income. Then two, even though I had lost a role as a househusband. Then one....

A year ago I was able to give up the last of the night classes for ESL and Developmental English to write full-time, but I still kept coming back to teach the summer school/camp thing. (The pay was just too awesome.)

This year was my last year of that.

I’ve been walking onto this campus on the regular for a decade and a half. And though the final page has not yet been written, of course, today I am walking off of it for perhaps the last time.

I'd be lying to say that's not a bit of an emotional moment for me. Nostalgia and saudade at once even as I stand and gaze across the buildings one last time. Every building—every single one—I can remember taking at least one class. Astronomy. Anthropology. Ecology. Literature. Math for Liberal Arts. Tutor training.

Thank you, DVC. The promise of a community college and a determined student made manifest. We did right by each other. I hope some 13th-grader on campus right now is about to have as spectacular a journey as I did with you.

However, mine has come to an end.