Guest Blogger Shannon Hilson: 3 Things No One Ever Told Me About Writing for a Living

[It is my honor and privilege to introduce Shannon Hilson to the ranks of Writing About Writing's guest bloggers.  Shannon is a freelance writer, producing sales copy, web content, ghostwriting and more for a variety of clients as well as a co owner and vice president of More Horror, a website dedicated to everything horror movie-esque.  She also doesn't just skip around happily because she made a hundred dollars after a year of blogging like I do.  Shannon is paying the bills with her writing, is a paid professional, and today we're lucky enough to have her write us a few words about what that's like without even charging me every penny of that $100.  You should check her out over at her own web page, The Creative Cat.]

As a writer, I naturally know an awful lot of other writers. Some of them are hobbyists or people who just want to write for fun and self-expression. However, more than a few of them hope to find a way to make at least a part-time living writing someday.

I would definitely say that I’ve always been someone who fits best into the second category. When I really like doing something and I sincerely feel that I’m good at it, it only seems natural to want to make some money doing it and that’s pretty much how it was that I eventually reached a place where I actually make my full-time living writing.

Yes, you read that correctly. I don’t just write for shoe-shopping money or when I feel like it between shifts at a standard day job. This is actually how I pay my bills and take care of my household. Even though I have bad days, get overworked, and need to complain about my job every so often just like everyone else, I’m proud to say I’m a professional writer at the end of the day. It helps that I’m a freelancer, so I’m my own boss as well.

Even so, there are a lot of things about writing for a living that I didn’t really expect and that no one ever told me about. I sometimes find myself thinking that it would have been nice to have known another freelance writer or to have found a resource that actually could have helped a sister out a at the time so I knew better what to expect. That said, I’m going to pass this information on to you – my friend Chris’s loyal readers – to see if those of you who are considering life as a professional can’t benefit.

1. A job writing for a living is exactly that – a job.

Many writers who dream of actually making their full-time paycheck doing what they love most have a certain vision of what they think life is going to be like once they’re actually doing it, especially if they’re doing it from home working for themselves. They imagine themselves with endless amounts of time on their hands, zero stress, and a general feeling of “wow I finally made it”. I will admit that even I thought that before I actually became a professional writer – that writing for a living would be no different from writing for fun with the sole exception of a sweet paycheck I’d get to collect for doing it.

Yeah, that doesn’t really happen. While there’s a certain amount of personal pride that comes along with being your own boss and rightfully getting to say “I’m a writer” when people ask you what you do for a living, you will still very much have a job in every sense of the word. You will also quite probably be taken by surprise by how hard you have to work at it, especially if you want to make a full-time living. I certainly was!

At times, your clients will be just as irritating, demanding, and fussy as the boss you have right now is. They won’t want to pay you worth a damn either and they’ll constantly be expecting you to give up your days off, your evenings, and your vacations to cater to them. Even when clients are impressed by what you can do, they’re not going to treat you like you hung the moon or anything. They’ll most likely reward you by giving you more to do and more responsibility… but not necessarily a raise or a bonus. Sound familiar? It should! This is what happens at your typical work-a-day job and writing is definitely one of those.

Also, you’ll have to wear all of the hats involved in running your career yourself. You’ll have to find your own work. You’ll have to handle billing, customer service, tax management, self promotion, and so forth… all by yourself. On the one hand, it’s sometimes handy not to have to rely on anyone else to do things according to your standards. However – on the other hand – you don’t really ever get a break. After your writing for the day is done, you have to put in several more hours doing the other stuff. You don’t get to go “it’s screw this crap o’clock” and hit the bar with your buddies at 6:00 on the dot.

2. No matter what the reality is, your family will most likely not see your writing as a job.

Unless you’re lucky enough to have an unusually supportive family or one that includes many freelancers and creative types, probably no one in your household or immediate circle will take what you do seriously as a job. This will be the case even if you make good money doing what you do… and yes, even if you’re the primary breadwinner in your family. Unless they do the same sort of thing for their own living, people quite simply don’t see the diff between what you bust your hump writing for your clients and all the Facebooking and tweeting they do on the weekends.

People think writing is easy and that writing for a living is nothing but getting paid to have fun, fun, fun in front of the computer all day long. If you work at home, family members will not take your office space or your work hours seriously. They will treat you like you’re always free to sit around and shoot the breeze, do them favors, or even run their errands while they’re away at their own jobs and they will probably get frustrated with you when you tell them to buzz off and let you work.

You will most likely never get credit from the majority of your loved ones for how hard you actually do work and how many hours you really do put in to make your writing career a success. You’ll always be that guy (or gal) who’s “so lucky not to have to work” even though I can just about guarantee that you will wind up working harder at your writing than you’ve ever worked at anything in your life. It helps to have other freelance writers as friends so you can have people to vent to though.

3. You won’t be getting paid to write whatever you want.

Full-time freelance writers have to worry about earning a living, so they have to write what people are paying for at the time. These days, that’s probably going to be mostly things like advertising copy, catalogs, web content about (mostly) boring subjects, and so forth. Don’t get me wrong. Every so often you do land a pretty kick-ass gig writing a weekly column on a subject that you’re really passionate about or selling a story or article that you’re really proud of to a big magazine. However, that’s not going to be your everyday reality most of the time.

What you’ll be writing depends on what your clients need you to write at the time. If that’s filler web content about replacement stroller parts, sales pitches for erectile dysfunction pills, or dry-ass product descriptions for a catalog that sells hunting equipment, then that’s what you’ll be writing about. (Stop laughing. I’ve actually had to write about all of these things during periods when I really needed the money. Some more than once!) If the idea of having to do that type of thing bothers you, then you may be better off keeping your day job and just exploring isolated opportunities that sound more up your alley on the weekends or something.

So is there anything about writing for a living that actually doesn’t suck?

Of course there is. If you’re really into communicating through writing and consider that to be a huge part of your identity, then I have to say that there’s nothing like the feeling that comes with getting to tell people you’re a professional writer and knowing that what you’re saying is actually 100% true.
You’re not that guy you used to know back in your MySpace days who claimed to be a writer, but never actually seemed to write anything in between his shifts at Burger King. You’re not the tall tale teller in your own family who maybe had something published in his school newspaper 30 years ago and thinks that that makes him a professional writer even though he hasn’t written so much as a grocery list since. You really are doing what most other writers only talk about – you’re getting it done every damn day of your working life and earning your living via your passion. Not a lot of people are doing that, but you are. That’s a pretty cool thing at the end of the day.

If you work for yourself, you do get a lot of freedom to make your own schedule as well. For instance, before my writing days, I always worked jobs that required me to work almost every weekend and keep irregular hours that made it virtually impossible to have any kind of personal life. I always wanted weekends off. Now I get them because I’m the boss and get to make decisions like that for myself. This isn’t to say that clients don’t try to coerce me into giving up my weekends all the time. You know what though? I get to say “no”. That doesn’t happen so much at other jobs.

At the end of the day, only you know if full-time freelance writing is for you. It comes with some trade-offs the way every career choice does, but ultimately, it can lead to some pretty cool opportunities and a career you can grow with into the future as well. 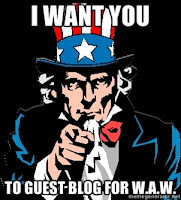 [If you would like to guest-blog for Writing About Writing, then W.A.W. wants you!  Check out what few limitations there are and contact Chris Brecheen at chris.brecheen@gmail.com  I'd love to have a guest blogger every single Tuesday, so don't be shy.]
at January 08, 2013