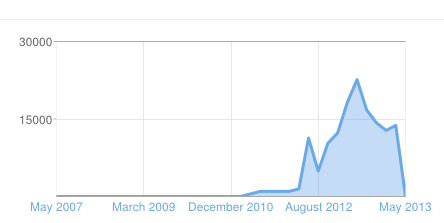 Numbers-
Numbers finally started creeping back up from The Great February Plunge of Twenty Twelve.  (To really get that right, you have to imagine a minor chord slammed on a seventies organ right after saying it.)  13,843 page views for May--about a thousand more than April, so we're finally on the upswing.  The Plunge happened because I stopped being such an unmitigated whore when I realized I was spending more time self-pimpificating than writing, so I try not to look at it as a bad thing--less a loss of real numbers, and more an artificial inflation bubble finally regulating.  Still, I can't pretend that there isn't a sense of relief that the pageviews number finally stopped doing an impersonation of Captain America in the plane at the end of The First Avenger.

I was particularly stokified to see this trend since May was such a tough month for me.  The end of the semester at my teaching gig meant that I did more jazz hands this month than normal.  Either I built up some street cred, or fewer people can see through my bullshit than I ever could have dreamed.

Articles-
Two Articles that will be going on to The Year's Most Loved were from The Mailbox.  This isn't surprising considering how well the Mailbox posts usually do, and how much jazz hands I did.  But I'm actually really excited to say that the third article was creative writing.

The Mailbox: You Don't Really Have to Write Every Day!
The Mailbox: Should I Outline My Book?
A Demon's Rubicon Part 1

Money Stuff-
Of course I will quietly post the official numbers later, but this was by far the most encouraging part of May.  I actually made more than I ever have off of both ads and donations.  Mind you, we're still only talking about fifty dollars, but considering I'm up from five or six dollars a year ago, I feel like moving to the bow of the ship and declaring that I'm the king of the world.

It's pretty fucking awesome that I'm right on the cusp of being able to say that I average TWO dollars a day.

June Preview-
Well, I have two weeks before summer school starts, which may impact my posting schedule a bit--I'm not sure yet.  Regardless, I might have to shift some things around to deal with a T/W/Th day schedule instead of my usual M/W night schedule, but I shouldn't actually lose much productivity give how low key the class is on prep.  And until then, I'm hoping to use the extra time to really pump out some good articles.  I hope.

On the block this month is a new part of It's Really Okay Not To Write, another glossary entry, some grammar rules you should probably know, the next craft essay, a poll on stand alone fantasy novels, and some kind of Kublacon write up.  Plus, I just have have a sense that Season 2 is really about to take off.  I just...have that feeling.

Then again, I may just sit around and play way too much Fallout: New Vegas though.  I've been known to do that during school vacations.  I'm kind of a lazy ass.