The Greatest Writer Moment I've Had In The Public Sphere 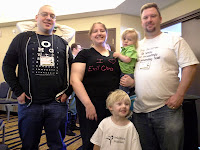 So, a little while back, Alisha asked me what my three greatest accomplishments as a writers have been.  Ironically, she is the same person who was, a few months later, instrumental in adding the new highest moment to this list.   Apparently she only asked so she could lie in wait and kick all those other moments' asses.  While what I'm about to share wasn't in the strictest sense an "accomplishment" on my part--at least not in and of itself--I'm still going to file it away as what has (so far) been my greatest moment as a writer.

I'll let you know if I ever actually have one!

There are actually three people who have taken my breath away with their support of Writing About Writing.  Well, that's not true.  There are about a dozen people who have taken my breath away.  Every time someone drops even five bucks in my Paypal account, I get breathless.  Then, after I am breathless, I strut around the house for DAYS.  I feel like John Fucking Grisham (which makes me wonder how the fuck John Fucking Grisham manages to feel like that all the time without deciding that oxygen is for pussies or going to the middle east to punch terrorists in the face).  Everyone who has donated money is on my "breathless" list, but I have three who are seriously like patron muses.  Gillian, Alisha, and Laura--each has done something beyond amazing in support of Writing About Writing.  Each knows why I sing their praises.  With one it was the largest single donation I've gotten (by an order of magnitude) here at W.A.W.  Another has sent me a non-trivial amount every month since last November and added up to more than I've made from every other source.  These women are absolutely amazing.

I am not even kidding when I say that I owe them a zombie apocalypse story where they are the ones to make it to the helicopter pad.  And, as per the facebook thread where I mentioned this to them, each has requested a steely hunk of man to escape with them.  I think that's only fair.

I briefly flirted with the idea of calling them angels, but since they are three women and I was actually alive and watching TV in the late seventies, it made me think of Charlie's Angels, and that show was sort of fucked up sexist-wise.  Plus I'm pretty sure my lack of mad fly seduction skills and general you-can-actually-meet-me-ability would mean that I was Bosley in this equation, and five years of being cock blocked sounds awful.  So I settled on patron/muses.

There have been days especially in the last few weeks that have really been overwhelming.  I'm having to step up a little bit on some of the housework and domestic chores.  (I'll tell you all about that soon enough.)  I was knee deep in finals at school, and my students were getting a little freaked out.  I had been trying to get ahead on articles (so that I can actually get them skimmed for errors and stuff) and ended up falling further behind instead.  I honestly wanted to just declare Writing About Writing to be on a week long hiatus.  The reason I didn't was because of these three.  Every time I thought about taking a break, it was the thought of these three and their simple faith in me that got my ass back into the chair.

Every time I started to slack off, I thought to myself, "Hey, these gals aren't being so amazing because you're Slacker McSlackerkins.  They won't be the patron-muses of someone who doesn't update.  Get your ass back to work and justify their amazing gestures of faith in you."  And that was all it took to get the day's articles out.  I'm not being poetic or overly generous when I call them patron/muses.

I mean Cathamel is jealous and everything.  This shit has totally gotten real.

Something happened at Kublacon this year.  Something wonderful and amazing.  I was sitting and waiting for a game when my roommate, Uberdude, told me I might want to take a good look at the next people coming in.  I looked at them in my best "writerly observant" way I could.

The first person through the door was Alisha's husband, Ryan.  He was wearing a T-shirt, and I saw something...distressing on that shirt.

Something like this happens to me about once or twice a year.  I think of something, but it turns out that what I've thought of is not actually an original idea but a memory that I've forgotten is a memory.  I'm constantly hearing lines I thought I'd made up on old shows or reading plots I thought were original in my childhood books.  I figured for sure I had somehow forgotten that there actually IS a character named Guy Goodman St.White out there somewhere.  I looked closer.

Wait a second.  What?  Had I messed up so badly that I stole an entire character concept down to the exact wording without realizing it?  That's when Alisha walked in, and on her shirt, written in puff paint.

That's when I realized what was going on.  They were wearing Writing About Writing T-Shirts.  The whole family had on different W.A.W. T-shirts.  One of their sons was wearing a "Leela Bruce Kicks Butt" shirt (we must forgive the PG-ification of the Leela's ass kicking sentiment given that it was on a kid who's not even four), and even their littlest one, Dor, was wearing a shirt that proclaimed.  "I love Cedric the Cephalopod."

Now here's the punchline.  You may have already noticed as you cruise around this website looking for killer merchandise.  There's no such THING as Writing About Writing t-shirts.   They don't, strictly speaking, exist.  Alisha had created all these shirts as a project, put them on her family so that she could walk into that room and surprise me (and MADDEST of madly mad props to Ryan, by the way, for being a great sport and supportive husband because he doesn't even read W.A.W.).

And surprise me she did.  Actually she kind of shocked the shit out of me.  If it hadn't been in a good way, I probably would have ended up on a pacing wire and oxygen.  I spent literally almost an hour in a state of perpetual blush, and I very nearly lost it right there.  I felt that like choke up point where I could tell if anything even a little sentimental happened, the water works were coming on.  Fortunately someone cracked a joke, so my Manly Man Broface cred remains intact (except with those who have watched me watch The Iron Giant--I don't know what's up with that).

So yeah, they just ran around the convention for half the day wearing Writing About Writing t-shirts that she'd made up.

It was....hard to explain.  Euphoria doesn't quite cover it.  It was at once the most visceral and sublime, humbling and proud moments I've ever experienced.  I've never really had an experience like that, so it's hard to compare it to anything.  I didn't feel like I expected I would to actually have a fan--I didn't feel like I was being honored.  I felt honored myself.  I felt the honor towards her--towards her family.  I wanted to go back to my room right that second and write for several hours to attempt to start to do right by such an incredible gesture.  Mostly it was like someone turned up the volume on life--I still felt insecure as an artist, unsure, hopeful, and fragile, but at a much higher volume.

It was the single greatest moment I've had as a writer since I started putting my work out in the world.  And I can't thank her enough for engineering it.