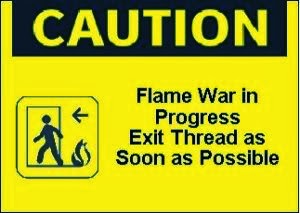 I had to switch to moderating comments to cut down on spam and bullshit. Internet Assholery is the T-Rex of the internet and I am apparently "moving" enough that it has noticed me like a tender juicy lawyer on the Port-a-Potty. I had to pull the plug, turn off the music, and tell everyone to get out of the pool.

Now there's a bouncer at the door checking to make sure that you mind your P's and Q's. But once you prove you can drop a reasonable comment, you should be good to keep commenting.
The comments I might repost, are the ones that are clearly intended to pick a fight or get attention usually by some jackhole who thinks their opinion is gilded awesome. Anonymous feedback from trollish twenty something who haven't yet learned how tough it is to put something out there is common....or those who have done so little to be proud of themselves that they are really only capable of feeling better about themselves by belittling others.

So please, unless you 1- Identify yourself SOMEHOW in the comment,  2- ask me not to use the comment as entry fodder you may find it showing up in The Mailbox.

Above is a policy about comments!  I will not post e-mails or other private correspondence unless I have express permission.  I may talk about the content of an email in vague terms, but I won't simply post them unless their author says it's okay.
Posted by Chris Brecheen at 12:54 PM