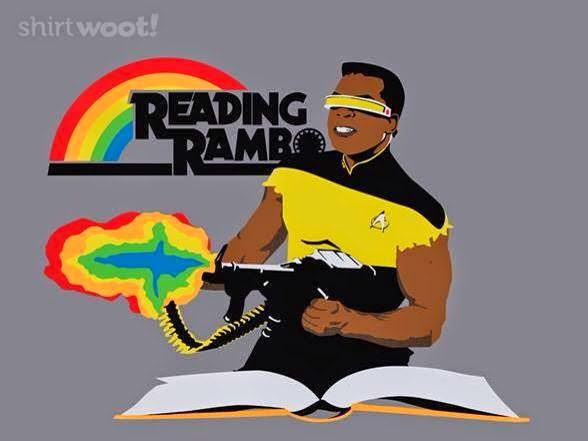 Every once in a while, I get to use what meager, paltry, negligible, exiguous social capital that I have managed to scrape together here at Writing About Writing to do something really wonderful. Sure, I'd love to be able to pay the bills without working three jobs, but in the meantime, one of the perks of running a blog that's read by about 1000 people a day is that every once in a while I get to point at something really worth while and say, "That shit's awesome!"

And then I get to watch something amazing happen.

Our Reading Rainbow Kickstarter fundraiser has already raised $63 (and 33 cents--also a third of a cent, but I'm hoping that evens out because cutting up pennies is hard). Not too shabby for only the first week! In fact, I was pretty sure we would make a little less than that for the entire month of June.

So here's my new promise: If we get enough to get one of the signed pictures from the Star Trek Rewards, I'll put up a poll for which one we should get, ask Mr. Burton to sign it thanking the readers of Writing About Writing, and post some pictures of it in all it's Levar Burton/Gordi LaForge splendor. I'd let you come touch it, but it's going to be a while before the ground breaking on the Writing About Writing museum.

(That is the $250 level, so we would need to make about the same amount each week in June. I'm not sure that he'll still have those pictures available by the end of the month, so I'm afraid I can't make this a guarantee, but I will try my best.)

If we really go crazy and get closer to $375, I will contact the Kickstarter and find out if there is a way to fund a library instead of a class.

UPDATE: We've also had two different people promise to match the funds Writing About Writing gives to the Kickstarter. So what ever W.A.W. kicks down at the end of the month will actually be tripled. I'm a Math for Liberal Arts kind of guy, but I'm pretty sure that means we've actually raised $189.00!

And even my math skills say that's just awesome.

So act now, and support Writing About Writing, AND the Reading Rainbow Kickstarter.
at June 08, 2014