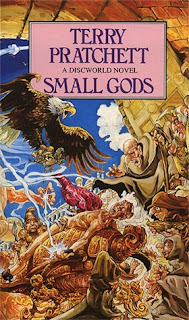 My hope is to futz with the usual update schedule this week and ratchet up the intensity of posts as the week progresses (and as time becomes more accessible), I'm double booked on pet sitting* and my nanny hours are higher than normal this week, but there should be time after tomorrow night to do some heavier posts that'll land at the end of the week.

*I know. I know. I said I wouldn't. I have already turned down some jobs that would double book me. This happened to be an emergency for a friend.

There are only a couple of days left for our second semifinal for best fantasy book or series written in the last 25 years. On Wednesday the results will go up (and later that day, the next semifinal round). I don't want this poll to go on for months more, so the quarterfinal rounds are going to be quick.

I'm told if you're on mobile you have to click "webpage view" then scroll alllllllllll the way to the bottom, you can find the poll.
at October 16, 2017