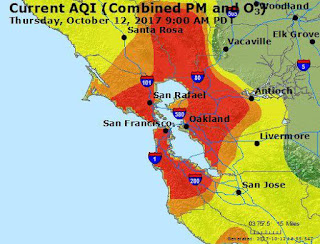 I started this just a few minutes ago as a "note" to a mailbox I was going to try to write (letting folks know why it wasn't going to be two mailbox responses today), but things have deteriorated in the last few minutes and this is going to have to be today's post...

It looks like I'm also going put up something light and fluffy tomorrow instead of the planned conclusion to 25 Things to Let Go Of If You Want to Write Creatively for Money. That post is mostly done but probably needs another four to five hours of solid writing and two or three more of revision before I'm ready to post it.

I'm experiencing sort of a unique writing obstacle here today. I live in the Bay Area about an hour from the fires that have made national news (not sure about international news). Basically fires usually skirt the edge of cities, but the city of Santa Rosa is a 200k population center on the border of the wilderness. There have been some fatalities and a lot of homes have been completely destroyed. In some cases, whole communities are unrecognizable but for the burnt out cars, chimneys, and major appliances dotting the rubble. An hour is no big deal to drive for a lot of the bay area's social events, and I know many people up that way. Most evacuated at some point. Some have lost everything.

As worried as I am for chosen family and upset about the fates of my friends, that is not the obstacle. The obstacle is actually the smoke filled air. It's really bad. (I mean REALLY bad.) When the winds shifted south, we got tons of smoke haze, and the air quality has gone to shit. I'm inside with the windows shut and already nursing a bit of a headache but the forecast is that it's only going to get worse. It's making it hard to focus on writing, so I think today I'm going to sit with what I've written on Triexta so far, and rest my burning eyes as often as I can.

What I'll try to do is make up for it this weekend when I'm pet sitting in Alameda. They get a bit more of the bay breeze, and the air quality might be better there. (It's not today, but they might be set-up to recover faster than anywhere else I can drive to in less than an hour.)

Writing is like flossing. (And really, we're only talking about writing with some sort of ambition of "making it" rather than just personal hobbyist fulfilment.) But yes...like flossing. It's your daily habit that matters-not the one day you miss because of extenuating circumstances. But just remember when the excuses start to include things you probably could work around rather than just things you can't, you might be on a downward spiral.