Help! My T.A. Says I Sound Like Alice Munro (Mailbox) 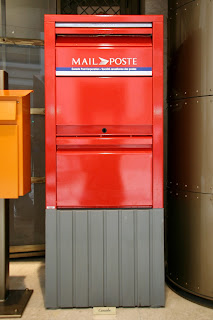 What do I do if my TA says I sound too much like another author?

[Remember, keep sending in your questions to chris.brecheen@gmail.com with the subject line "W.A.W. Mailbox" and I will answer a couple a week.  I will use your first name ONLY unless you tell me explicitly that you'd like me to use your full name or you would prefer to remain anonymous.  My comment policy also may mean one of your comments ends up in the mailbox. Yes, I might let you jump the substantial queue of questions if your question is good and seems time sensitive.]

Hi Chris, enjoying your blog and finding it quite informative.

I am a mature student working toward a degree in Creative Writing at a Canadian University. In my creative writing class we have been assigned a short story to write and the TA (who marks my work), he has provided a critique. He says that it is quite fine for the course, but that if I try to get this story published I will face obstacles since it looks like I am trying to imitate Alice Munro. I am not trying to do that, it is just the way I write (I am 63 years old and grew up in small town Ontario, like she did - if that explains it, I don’t know). Anyway, he told me to try and change my writing voice- maybe write in first person rather than 3rd and maybe change up the way I write so it is not so similar to Munro’s “voice”.

I am not sure if this is a problem of interest to others, and so maybe not for your “WAW mailbox, but I thought I would ask your thoughts about writing “voice” and if you think this will be a problem for me to get anything published.

Alice Munro won a Nobel Prize in Literature (in 2013) and is herself pushing 90.  Finding another would be a publisher's wet dream come true.

I'm going to write two replies today Peggy. Because in the absence of a story I can read for myself, I'm not sure what's going on with your TA, but I feel like it's not 100% fair to assume that he's full of shit. Instead we will treat him like Schrodinger's T.A.–simultaneously full of shit and not full of shit at the same time because physics.

I'm not sure what your T.A. means by that, Peggy. What it probably means is that your T.A. has had to read a lot of Alice Munro for his own classes lately, and he's got Alice Munro on the brain. Like you know how some people see the Virgin Mary in a cheese danish or swear that the cloud in the sky looks like the face of their Arch Guru. Maybe that's what's going on?

Or maybe he's trying to show off that he can connect your writing style to someone...anyone. MFA's (I'm assuming he's an MFA if he's T.A.ing your Creative Writing class) love to show off how well read they are by telling writers who they sound like. Because they've totally read that person. Absolutely. And not just for class that one time. Oh no.

I don't want to get you in trouble, but my first response to this would probably be: "Oh? How so?" Because then there's about a 99% chance that the ensuing tap dance will be at least entertaining.

So here you have a T.A. who has given you marks for your story and then decides that it's his job to tell you if you're going to get published or not. I wonder, does he have some extensive experience in publishing that you don't know about? Does he know what publishers want? I mean it's possible that he might, but most T.A.'s are still in school because they have the same dreams as other writers–to be read and published and crack the mystery of how a writer "makes it."

And not to put too fine a point on it, but if you sounded "too much like Alice Munro" you would already be in danger of getting a NOBEL PRIZE FOR LITERATURE. So what the fuck is the problem exactly?

Oh and for 500 points and control of the board, see if you can guess the MOST common bit of writing advice given by people who aren't really sure how to give writing advice. Did you guess "Try changing the point of view"? Yeeeeeeaaaaaah. Not that it is always bad advice (it's not), but it sure does a lot of standing in for more substantive criticism about narrative distance or subjectivity.

Look, there are lots of ways to give advice about how to improve a short story. T.A.'s aren't the nicest or the most teacherly–they're usually just the students that have the highest combination of "Did well last semester in that instructor's class" and "Financial need." Most of them are quite capable of really taking a careful read or two and a really considered approach to what an author was trying to do. And if T.A. wasn't taking his own classes, writing his own novel, probably some kind of side gig or three, and maybe even a social life, you might be getting that sweet, sweet ambrosia they can dish out. But frankly,  "This is too much like a Nobel Laureate in Literature to ever be published so try switching it to 3rd person" is NOT one of those ways.

I'm sort of guessing that you would have mentioned it if you were trying to imitate Alice Munro (rather than lie to me, trying to surreptitiously get away with it). I mean Raymond Carver writes a lot like Ernest Hemingway, and it's definitely not some sort of accident.  (It also surely didn't bother any publishers.) Most of us copy a little too closely when we're first starting to emulate our influences.

I suppose it's possible that you're similar enough that your T.A. is worried about you sounding derivative. He probably is pretty capable of doing a close, good-faith reading if he puts his heart into it. And he may even have some valuable advice for how to improve your work. Perhaps your narrative is really pulling in the direction that an omniscient narrator or distant lense would work better. One person suggested your TA might be trying to "trick" you into doing what they want, because accusing you of imitating a brilliant writer is always better than just saying, "I think this needs an omniscient third to pull off what you're trying to do."

Alice Munro's voice is sort of the apex blending of a flowing and minimalist style. Crisp declarative sentences continually punctuate these long, flowing, concrete-imagery-laden sentences with parentheticals set off by em dashes that kind of suck you into them like a boot in the mud. You can basically see Munro's heavy influence by both modernism and minimalism and the way she delights in using the anxiety between the two in her prose to set off the anxieties between simple and complicated dynamics in her story.

It's sort of brilliant, but if folks don't know what they're doing it's like just adding a bunch of commas randomly because you want to be ee cummings. Maybe your TA wants you to avoid that.

If you sat down and read a shitton of Alice Munro before you wrote that story, she might have influenced your style. I always write long Byzantine sentences with thick vocabulary choices after reading someone like Poe or Lovecraft but find my sentence style and length varying and filled with analogies after I've read Morrison. So maybe (MAYBE) you might need to work on finding your own voice. (Writing in the morning before you've had a chance to read can help you with that.)

Short of that though, it might just be your style. Maybe it's just a happy accident. And if T.A. picked up on a similarity, well good for him. I'd get a second opinion, but it does happen. If that's your voice, that's your voice. Trying to write outside of it is going to be like walking around and speaking in a lower or higher octave all the time. (It's possible, but it's always going to feel a little unnatural.) There are certainly worse things to be said about a prose than that it's Alice Munro-like.

And if you're going to be writing another couple of drafts anyway before you push it out of the nest and hope it can fly, you might consider seeing what happens if you change that point of view–it can deeply change the narrative distance and/or the ease of changing the objectivity vs. subjectivity.


What you should do about it?

Fortunately your play is the same no matter which one of Schrodinger's T.A.'s this guy is.

Don't worry about it. Yet. Or maybe ever.

If you're not ready to publish (particularly that piece), just keep developing your voice and writing what brings you bliss. Unless you're being intentionally derivative and keep trying to do so, you'll find your own way and unique narrative voice in time. 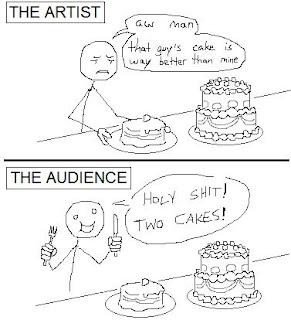 If you are ready to publish, submit your story, and see what the actual gatekeepers say. This guy is a T.A. If he's published anything, it's probably a story in a literary magazine that got him ten free copies as payment. (Not that that's not a start, and not that there's anything wrong with that, but he might not know what he's talking about.) If you get back from a few agents and publishers that you sound "too much" like Alice Munro, then maybe it's time to think about how to change things up.

To be honest, I seriously doubt that's going to happen. That's really not the kind feedback that gatekeepers give writers. (Trust me, I know a lot of them.) Sometimes they do get criticism about their voice, but rarely that it's derivative of [X]. (Certainly not where X is someone who writes so fucking beautifully.) "Derivative" is a much more common criticism of plot or characters. Mostly the struggle to get published is not about finding one's voice; that tends to happen one way or another with enough writing. Mostly it is about compelling narrative and character and a base level of prose skill. I also can't really imagine a publisher that would be too upset if they found another Alice Munro. I mean really!

If you're super worried about the whole accusation, read some Munro and see what you think. Fiddle with your narrative point of view if you want. It's YOUR art. Maybe you can see a few sentences where you totally did X or Y. And if they bother YOU, then change them.

I suspect what you're going to find, though, is that you don't think your writing is anything like Munro's and your T.A. was just dropping names.
at February 14, 2018