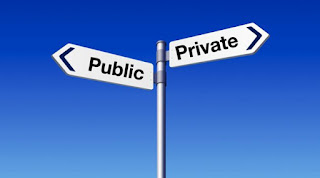 There are a whole series of things I want to write about when it comes to The Renown Margin (wherein I'm not really famous, but some parts of my life are juuuuuuust starting to bend that way) and I have several articles on their way about everything from why it is very unlikely that anyone famous will register outrage from a stranger to the fact that people start to treat me as a stand in, and even being the beneficiary of that can be scary. I'll space these posts out a bit, but there's a lot to say.

But all of it seems based on a core concept that I need to get out first.....

Keep your private and your public faces separate and be very careful of who you trust enough to cross over that Rubicon.


People will hurt you if you let them.

Most of them won't mean to (though some of them surely will), but they just aren't careful. They know you're a human, of course, on an intellectual level, but for many of them you're not quite registering as entirely real.

Analogously, you're more like a stuffed animal. Most of what they like (or don't) about you, is what they have decided you are based on little or no evidence.

Did that sound harsh? It shouldn't. They don't even know you as a person. They might think they do, and that's the problem. Most people don't think they know someone they've never really met, but with you they might have made some assumptions and spackled in the cracks with Whatevertheywant™. Not all of them will take the care to respect that they don't really know you, so you might want to keep them at arm's length until you know that you can trust them.

The people who like your work have come to you for "the show," whatever they think it is going to be, and if you let them in, they may hurt you when "the show" is no longer exactly what they want it to be or just wander off when they are no longer interested. People who don't like your work will attack without regard for the human being that is behind whatever has upset them.

If they like you personally, often the aspects people know become distorted, and often those they don't know they fill in with some level of projection, so that they don't really know you. They know bits and pieces (often the curated stuff that you are public about) and fill in the blanks. And if they don't like you the same thing happens, your failings becoming all they are aware of and they assume you also kick puppies and hate orphans.

Of course when folks begin to see your flaws they may accept them or they may suddenly change temperature on you with no warning.

And mixed in with these folks (who are often just careless), are people who absolutely want to use you. You are a means to their end. They want some of "it" to rub off on them whether it is literally people coupling with you to boost their own networking profile or just folks who think that fame is some sort of fairy dust that shakes out of people if you're near them.

They're not even the worst part. The worst part is that there are a few out there who want to see you fail. They are just watching to shoot you down when you stumble and say they always knew you'd fall. (Just Chris being extra paranoid? Well even if I hadn't heard precisely as much about other famous folks, it's fantastic what you can find out when people don't realize they're commenting on a public thread.)

This is a nasty cocktail to be swimming in with nary a care. And if you give out your trust like some nilly who likes it willy style, and assume that everyone who likes you really really likes you, you're going to get hurt. And not a little.

This is one of those things I wish someone had told me before I got slapped around by it a few times and had to learn to piece together my own boundaries out of bailing wire and spit.

Oh sure, not everyone is carrying around exactly my people-pleasing/abandonment issue, step-dad-was-likely-a-malignant-narcissist-who-definitely-emotionally-and-physically-abused me baggage, but you can still expose yourself to a lot of unnecessary hurt.

I don't even mean the unsolicited pornographic selfies and solicitations that are recanted the next morning when the alcohol wears off; those don't really cause me angst.  And I don't even really mean sliding into my PM's to get some validation and emotional labor until exactly the moment another relationship starts. That shit is mostly eye roll worthy and just inconsiderate.

However, over the years people who have gotten to know me only through my writing have befriended me and then casually disowned me utterly from their life when I came down the "wrong" way on Sanders v. Clinton; flirted with me, hit on me, come on to me, and even made sexy plans with me, and then ghosted when their marriage that wasn't quite as open as they'd implied; assumed the worst possible faith about a single interaction they thought targeted them despite a years long relationship; leaned on me for support and developed a rapport and relationship and even said they loved me only to basically disappear once their crisis was resolved; brought me into their confidence for months with many words about how invaluable our relationship was both because of my sense of social equity and personal empathy only to completely disappear one day; and have said all kinds of things that make me feel less like a human and more like someone they are entitled to. (I mean, I get that "I'm going to marry you" is supposed to be a compliment, but buy Chris dinner and ask him about his dreams first, mmmkay?)

Each of these things hurt. The acute kind of pain that happens when you break up with someone or lose a friend. I wondered what I did wrong. I blamed myself. I don't believe any of these things happened because those people suck. I'm fulfilling a role in their lives, and I was not being careful enough about who I let in. And that familiarity we shared was more disposable to them.

Because they never really saw me as a PERSON.

Even still, these are folks who went out of their way to treat me like someone they really liked–those few anecdotes doesn't even count the dozens, or perhaps hundreds, of folks who sort of drift in and out, usually my social media presence, for their own reasons (the topic for a future post) without so much as a word.

When strangers treat me this way, it doesn't really bother me. I don't expect to have a relationship with someone I joke with for three stops on the BART, and I don't feel betrayed when someone I don't know assumes I have no reason beyond my own moral turpitude to have gotten tired of Bernie Bros. It just is easy to forget that folks are really actually strangers when they act like they know you and seem to quite like you.

Not unless you have that boundary in your head to begin with.

In my case, this advice has a very literal expression on social media. I have a public account and a private account. But that also works for me because I have a huge online presence, and I am wary when I meet people who know me only as an author. I remember that it'll be a while and several meetings before they know Chris, and not a chris-shaped stuffie filled with preconceptions and projections.

If you are starting to develop an audience (or just want to), I can't give you any advice more valuable than to keep your public and private facing selves separate.
at February 01, 2018