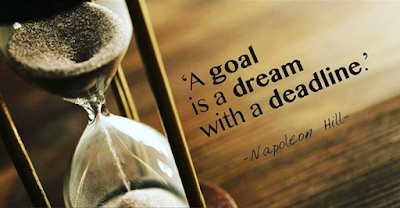 Today's prompt isn't about writing; it's one of our many "meta" prompts about being a writer.

When you ask writers about their goals, the first major problem you run into is that they don't actually have any. The second is that if they do, they're really more like objectives.

Ask most writers what they want and you'll get some pretty mushy answers. To "make it." To "succeed." Among the most concrete would be some idea of paying the bills with writing or some belief that publication will be the holy grail. Of course, get a little closer and you might find these a little mushy as well. Self-publication or small presses don't count (nor would a career writing smut). Neither would paying the bills if one was living in a tiny old studio next to the boiler room on the outskirts of Tupelo, Mississippi. They turn out to have some important specifics regarding their goals that are hard.

Of course, we can get lost in our fantasies, but it's important to have solid, concrete, and plausible goals. When we're faced with the option of a low paying day job writing web content for 60+ hours a week, it's very important that we know if our goals are "I want to clear $25k doing anything so long as it's technically writing," or "I want to be a upper middle class novelist with a fanbase and published by a big five." (I wouldn't recommend grueling hours of content writing to the person who wants the latter.) Check back in on this person in twenty years and if they made the wrong choice, they're going to be no closer to their goals.

And it's certainly important, in a world with so much advice about how to "make it," if you would rather just write as a hobbyist who enjoys the craft when the muse attacks. And if writing is the way to fame, fortune, and groupie threesomes, it quickly becomes apparent given the level of introspection. (And by the way, there are way easier ways to get any of those things than by writing.)

The problem is that these goals are often too big. They're just too mamathian for us to handle. We're like a kid who wants to get an A in Math class but hasn't the first idea how to make that happen. As important as specific and reasonable big goals are, and as much as they may perhaps shape and define our major life choices, they are often too large to metabolize into some form of daily action.

This is where short term goals come in. How do you break this big life goal down into pieces? Instead of looking at some gigantic thing that will take place over the next 10+ years, how do you proceed in the next year or two. (I wanted to be a working creative writer, and I wrote aimlessly for decades until I started setting smaller goals like "Get a Creative Writing degree." "Start a blog and post every day." "Figure out how to monetize, and do that right away even if it's a few cents a month." "Write at least one page per night on my fiction.")

How do you break down your big goal into bite-sized chunks? Of course it depends on the goal. If you want to publish a novel (and let's assume that you want to get it right, but self publishing would be okay) instead of just saying "Yep, totally gonna do that someday," identify the smaller goals in getting there. 1- Write it. 2- Rewrite it. 3- Revise it. 4- Content editing. 5- Line editing. 6- Proofreading.

Then take step one and decide what the smaller goals are for that.  "1- Write it"= " 1-I will write at least one page per day. 2- I will write at least three pages every day I don't have work or family obligations. 3- I will spend 4 hours writing on Sunday even if I finish three pages early." (I'm a huge fan of daily goals–and daily writing–if you can't tell, but you can personalize your own goals.)

The end result will be analogous to your ability to make big life decisions based on your big goals, except with smaller decisions and smaller goals. (Rocket surgery science, this ain't.) For example, you might be making great choices regarding not letting yourself get roped into a grinding job that will use up your creativity because it's "technically writing for a living," but now you also have the smaller goal to help you make the choice that you have to get a page written before you start playing Farcry 5.

Or if you want to look at me, I outline my goals and realize almost instantly that I'm spending too much time on Facebook under the auspices of "promoting my work" and not enough time actually writing it, so I immediately know that even though my Facebook page is huge and successful and gives me positive feedback when I provide it with time and attention (and has even been the source of some income), it is not a direction I want to channel so much energy. So I need to put limits on that or bump up goals regarding the actual writing.

These smaller goals should all be SMART(S) goals too. Write "a little" every day is technically achieved after two words, and will never get your novel written. Write "a page" every day is going to see your first draft in about a year. Write 1700 words a day might not be reasonable if you have a day job or a family and will quickly be abandoned by the wayside. The more these goals adhere to the SMART(S) paradigm, the easier they are to achieve. (That last "S" is particularly important. It's fine and well to submit to The New Yorker and/or The Atlantic ten times in the next five years, but you have little control over whether or not they actually accept your submission.) It's just really hard to hit a goal if you haven't really defined it.

PROMPT: In order to do this prompt, you must first define what success means to you. Now break that down into short term, yet still SMART(S) goals. Come up with at least three sub-goals that are themselves steps to getting to your main goal. (For example, if you want to be a novelist, you should probably write a book.) They can be steps done sequentially or concurrently (like I am writing a book, promoting myself through social media, doing smaller works of fiction, and working on a career as a blogger simultaneously) but they should break down your main goal into smaller pieces (my main goal these days is to phase out my side gig jobs because I make career money from writing). Now choose the first goal (if your three goals are sequential) or whichever goal you think is more important (if they are concurrent) and break that into at least two smaller pieces. Each of THESE should also be SMART(S) goals.

This process is recursive. You can break smaller goals down even further. (Perhaps focusing on where and when you want to write each day.) Find whatever level of specificity works for you–but be sure that's for definitions of "works for you" that involve actually making progress towards your goals and not "vague enough that it's easy to ignore."