What We Fight For (I Am the Night) 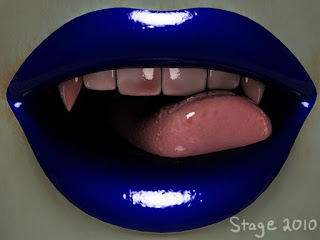 I am the Night––in which I shamelessly shoe-horn writing advice into thinly veiled game write ups.

On Saturday night I played in my monthly Vampire LARP, and there was a mass combat. Fortunately, such things don't really happen very often. Usually what combat there is is partaken by a group of badass combat monkeys who want to stomp around, and they go do it far away from court. Personally, I think it's a little weird to play even-more-prone-to-violence-than-the-most-violent-humans when you're trying to get inside the head of a character who will live forever if they don't suffer a violent death, but different people like different aspects of LARPing.

But on Saturday night the fight came to US.

Now I've already told you about how this character is basically the most aggressively authentic and non-vampire character I've ever played. (Imagine dropping Twilight Sparkle into Game of Thrones for context.) Mark wants to make FRIENDS at court and really genuinely likes people and tries to be nice. He's absolutely not built for combat by even the most generous yardsticks. His three physical traits means unless he gets pretty lucky, he loses any physical altercation with anyone....ever....including literally all but the most incapable mortals.

The court was dividing up into people who would fight and people who would hide in sort of a "safe room" (to be slaughtered horribly if those who fought lost, I suppose). Escape wasn't fully an option. It might have been for Mark if he abandoned everyone and used his hidey power and super speed to just haul ass away while effectively invisible. But the irony of this particular iteration of How Vampires Work™ is how powerless a single vampire is without the others. Basically anything in the World of Darkness is more powerful than all but the oldest and strongest vampires.

In the end I didn't go into the safe room even though it was completely absurd for me not to, and as we got split into maximally effective "cells" that took advantage of our ability to exploit game mechanics, I ended up being grouped up with some eager-to-die/no-guts-no-glory cell that wanted to go fight the vanguard forces. So there I was on the front line––just me in my shorts and kitty cat t-shirt with the basic ability to look more intimidating than most people with fangs, while vampires around me used flaming fists, cavitated people's chests with a single hit, wore ballistic armor, dominated our enemies into fighting for us, carried small arsenals of ballistic weaponry, casually used enough physical strength to lift train cars, turned into ten-foot xenomorph-like monsters, and shrugged off three to four times the amount of damage that would turn me into ash.

Interestingly enough, I got to be pretty "cool" in that fight, but probably because Chris knows the systems. I basically hid for the first round of horribly violent combat. Once our four-armed antagonist with a shotgun and a pistol and a small army of war dogs had used all his willpower (to get a second chance to succeed on failed attempts) to put flaming holes in half the court, he didn't have anything left to fight my little pea shooter dread gaze.

So baaaaaasically, I hissed at this outrageously big bad nasty, and he wet himself and ran. (That'll be a fun story for the survivor baddies to tell to their boss.) Then when we were told (in a logistical protocol called "mediation") that we would win against all the dogs, but we had to split 21 aggravated between us. All the others soaked as much as they could, but everyone was super hurt so they could only do like one or two points each. We were eight short. I had not been hurt yet. I took the last points. So I went from not being wounded at all to “I would have ashed if I had taken ONE more damage.” And that is how we managed to have zero casualties. (I sort of imagine the last few minutes of that fight involved a lot of Mark jumping in front of dog coup-de-graces and screaming "NOOOOOOOOOOOO!")

But let's rewind to bring this back around to writing. I spent several minutes thinking about the choice that MARK would make regarding partaking in the violence. I knew Chris would be bored as balls in a mass combat and feeling FOMO (fear of missing out) if I went into the safe room, so I really tried to decide what this character would do. By all rights he should have left or gone into the safe room. But he didn't, and there were reasons for that.

None of these things seemed unimportant in the equation. If I'd able to leave, you bet your left nipple I would have. If I couldn't have done anything useful, I would have blown that popsicle stand. If I had been alone, I would have vacated and shunned the area, thus inventing the vacation. (Vacate+shun...nevermind.) If what was at stake was just the lonely observatory in the middle of nowhere where court was being held, I would have been out like trout. If there were a way to get away and some people just wanted to fight, I would have wished them the best and strolled away whistling Green Acres.
What this made me think of in terms of writing is why people, who will otherwise survive if they do not engage in violence, decide QUITE regularly to go forth and risk their lives. I'm not talking about the soldier who jumps on a grenade to save his companions, but the entire way in which armies are moved by using culture to override a human's natural instinct to leave danger unless there is no other choice. The ways in which humans are encouraged to go breathtakingly against their self-preservation instincts, and the ways that are reproduced over and over again to get soldiers to be the aggressors. Mark's rationalizations echo so many others.

A situation is created that is to soldiers benefits to get into (usually by means of a steady paycheck or promise of spoils of war and maybe an education) so that they go along willingly with the steps that lead up to the danger. They are actually trained to see themselves not as individuals but as part of a group of fighters who will maximize their personal chances of living. They are put in harm's way through a chain of command. There is substantial consequence to simply leaving (courts martial...execution...massive social censure). There is an entire culture by which one's failure to do their duty will be seen as causing the deaths of others. Each person is told their contribution is absolutely vital.

Perhaps most importantly, most military action––even aggressive, offensive action––is almost  framed as defending something that must not be lost, like "a way of life" or "everything we hold dear," and almost never "Goldman Sachs corporate interests in the region" or "we need that land for our imperialist and colonialist expansions."

For writers who regularly have ordinary people taking lethal chances, it's useful to know why they might do that (unless their foolhardy bravery is simply the stuff of legend), and for those who want to portray military aggression, it is useful to know how they motivate mass numbers of people to do something that by all rights is against their self-interest.
at June 24, 2019