F.A.Q. How Do I ACTUALLY Start Writing? 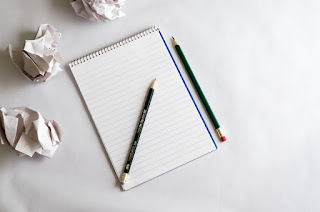 Short answer: Establish writing as a habit instead of a single creative endeavor, learn to trust that the process is messy and involves lots of rewriting and revision instead of trying to get it right on the first shot, take whatever logistical steps you need to help you, and if all else fails, kick-start your writing with someone else's writing.

Longer answer: First of all, sympathies. Starting can be really hard. Unlike some condescending memes, I don't think writer's block isn't REAL. I just think it is inherently not a creativity problem. It is inherently a psychological problem, usually with wanting to get the writing right without trusting that one will have to go through the lengthy process of rewriting, revision, and editing. Once that process is more fully trusted and the "Make myself be creative" straining (complete with agonized grunting) is replaced with simply sitting down to work and having the words and ideas come in a generous flow, you will probably find that the only problem you ever have is having more ideas than you could ever write down, and having to choose the best of them to work on.

Secondly, the way out is through, but it's kind of a long trip. I wouldn't expect to be spinning around on gentle European alive-with-music hills by this time tomorrow. Entirely new approaches to writing need to be learned, techniques practiced, and habits established. It can take.....well there's no upper limit to how long it can take, but even if you're going pretty fast, it's not likely to happen in less than a couple of months, and probably more like six or more.

Of course, at any point in this process, if the words are coming, you can go back to what you were doing. The risk is that you'll end up stuck again. By far, the main reason writers get writer's block and sit for hours in front of a blank page is because they are gripped by the overwhelming need to get it RIGHT. They are having trouble thinking of a good first sentence or the perfect thing to happen next. If you go back to what you were doing because you basically thought of something to write, you might end up stuck again at the next place you feel you must get right. What you really want is to learn a whole new approach to writing––one that is habit-based instead of goal-based. One where the faucet just "turns on" when you want it to. One where you just sit down to two (or ten) hours of daily work instead of trying to sit down and write a short story.

I will tell you some jump-starts though. I'm nothing if not versatile. If you just want a fix for RIGHT NOW, today, try the following:

However, if you are more interested in never having writer's block again, and consistently being able to write easily each and every time you come to the page, you may have to invest a little more time in something a bit like a "writing training regimen."


Between your quick fixes and your New Habit Regimen™, you should be able to (actually) start writing at any time you want to. And now you can approach the page as a matter of routine and regimen instead of a single act of gotta-get-it-right creativity. Once you have a creative flow that essentially obeys you (you controlling your muse instead of your muse controlling you — if you are okay with that metaphor), your writing sessions will feel much more like sitting down to just do your thing for a few hours (or more).

Here's another version of the same answer. Because sometimes I answer the existential questions that trouble so many writers, even if they're already in the FAQ.
at February 04, 2020