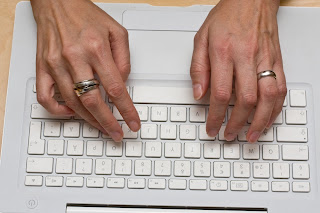 The best way to get past not writing?  By writing.

But before you file this under D for "duh," know that I'm talking about a different kind of writing.  Free writing.  (Which despite it's name is not what most writers do before they sell their first novel.  ~rimshot~)

If you're ever trying to generate ideas for something--a new story or a new character or where the plot of something might go next or if you're ever stuck (especially if you feel like you have writer's block) the worst thing you could do is give in and not write.  Even trying to concentrate and focus on a solution isn't always the best idea.  Fortunately you have one of the absolutely best strategies for stimulating creative thinking and removing creative block at your beck and call: free writing.

And the best part is, as a writer, you're already "hella" good at it.

Though free writing in the morning is one of the hallmarks of Dorothea Brande's writing process tips to help a writer tap into their creativity every time they sit down, it is also superb for getting a writer past more temporary obstacles in their writing like characters struggling against them, plots they can't resolve, or just problems they're having with the language getting from where they are to where they know they want to go.

I know what you're thinking.  Free writing?  Seriously?  I know the phrase "free writing" probably gives you flashbacks of Mrs. Pertenski's class and of sitting there wondering what the holy fucking hell you were supposed to keep writing about "no matter what" for ten minutes.  But now that you're not in school and thinking about book reports, it's time to dust that tool back off and give it a place of esteem in your process toolbox.


Why it works.  The human brain's processing speed for imagery and abstractions isn't quite measurable yet, but we have a pretty good idea of how quickly we can think when we're using language.  That is when we are thinking "in words" we know how fast that happens, and it's right around 500 words per minute on average.  The way they know that is because speaking speed is about 150-175 words per minute and translators (especially sign language translators) work right at the very edge of that ability.  They have to process that information three times over (listen, translate, speak) and it's JUST about the limit of human ability.  If you've ever had a situation where you used a sign language translator, you probably actually had two of them because it can brain fry one person to keep that pace up for more than about fifteen to twenty minutes.

Typing speeds are probably less than 50-60 words per minute unless you are quite good, and are certainly less than 100 wpm unless you are phenomenal.  If you write by hand, you'll go even slower than that.  This means that when you write, you activate all your linguistic centers and start processing about five to ten times faster than you are using them.  And if you focus on writing to the exclusion of anything else, you will have that entire 90% focused on what you're writing about. This is why it works.  It's like using a high speed modem to surf the net but saying "any bandwidth you have left over, go ahead and download Season 3 of Community."  Except Community is like...your blockage, and you're not downloading it so much as...um....getting rid of....you know what, that's a bad metaphor.

How it works.  Writing is a recursive process.  As you write about something, you think about it.  As you think about it, you have more to write.  The fact that you are writing acts as an anchor to the subject.  This is why free writing is often better than just thinking about something.  When you just think about a topic, your mind can just float away.  When you're writing about it, it remains fettered.  It can't get too far out in front of you or go think about what you want to have for lunch.  That means that 80-90% of your processing power is working on what you're writing about, but not the actual writing itself.  It is sort of chewing around the edges and playing in the margins of your thoughts. This is why so often AS you are writing, ideas will pop into your head or you will have a last minute thought about how to reword something to be better.  It isn't magic.  It's the fact that most of your brain is going over what you're writing about seven, eight, maybe even nine times before you actually write it (or possibly thinking about what you just wrote).  Your brain is an excited dog on a non-leash hike.  The dog runs out ahead of their human, but it races back every couple of minutes to check in.  Then it runs off again to sniff everything, roll around, run after squirrels, and bark at other dogs.  That running around out ahead of you is pure creativity in motion.

That's why free writing is so effective.  It forces you onto a topic, but then unleashes your creative power on that topic in a recursion loop.

1- Pick a topic-  Free writing about any topic in the world can be difficult.  Some ideas are just too big. In fact, the  more specific a free writing topic is, the more likely you are to actually be able to write about it and generate creative ideas.  During Brande's morning writing, it is better to write whatever comes into your head because that's what morning writing is about, but if you're dealing with an obstacle or just trying to jump start your creativity to a story, pick a topic.  Anita King has a blog primarily dedicated to free writing prompts that I recommend if you are at a general loss for creative ammunition.  If you have a specific problem, it's best write about that.

2- Write.  And don't stop- Even if you have to start by writing "I cannot think of what to write about this but I am going to do a free writing exercise anyway..." write something.  If it's a topic for general creativity, try restating the topic as objectively as you can to help get you going.  If it's a problem with an existing piece of writing, try describing the problem you're having in detail.  Even if you are simply uncomfortable about trying free writing, write about that.  I have never met a single person who was not writing fluidly within a couple of minutes if they put pen to paper and wrote something in good faith.  No matter what, you don't want to give your brain an "out."  You want it to keep focused on what you are thinking about for the entire time.  This part is UNLIKE regular writing, and must be done with focus if free writing is to work.  KEEP WRITING.  Don't stare into space thinking of a word or pause to consider your next point.  Barrel through, even if you have to use less effective turns of phrase or ramble a bit.  Don't worry about spelling or grammar.  Don't worry about the prose.  Just keep writing.  Imagine Samuel Jackson is reading you a poem called "Keep the fuck writing, motherfucker."

3- Steer, but don't railroad- You may find yourself drifting off topic.  You might want to explore a sub idea or just completely go off on a tangent.  If you can easily get yourself back on topic, that's fine, but don't force it.  If you run out of things to say on the topic at hand and wander off or if your brain really wants to write about something else let it.  There may be a reason.  Your brain has been thinking about this multiple times before you showed up, so give it some cred.  Think about this interaction like a conversation (which it sort of is--a conversation with your brain) if you start out talking about zombies and the conversation moves away, you want to ease it back towards zombies with smooth phrases like ("Yeah, that's kind of like what I was saying about the zombies earlier,) and not like a sledgehammer ("Yeah, so back to what I was saying about zombies).  Think about how good conversations move and flow organically even if they return to a main idea.  Trying to force a return to a retired subject tends to make the conversation shut down or at least get really stilted.  If your brain is insisting on going off topic, it can reveal some of the most unique and creative solutions to your troubles because it will have an idea before you do consciously.  So let it frolic if it wants to.

4- Limit yourself to 15-20 minutes- Your brain can only process this quickly for a few minutes at a time.   You are not writing in the traditional sense at this speed.  Writing involves thinking of words, rereading things, bursts and plods and is a lot more like an obstacle course.  Freewriting is an all out linguistic sprint. The speed of free writing causes your brain to work at the upper end of its linguistic processing ability which is why you can get creativity out of it.  (That's why it's important not to slow down or stop.)   Much like the translators above, you're going to need a break after you've pushed it for so long.  You probably won't really even need a timer because you'll find that you come to a point where you can't think of anything more to write.  Your brain just feels kind of cooked.  (Don't worry, it'll only take a bit of a rest to get your neurotransmitters back.)  If you have a lot of practice with Brande's morning you might be able to do this long enough that setting a timer is a wise idea, but for most people it's naturally around 15-20 minutes, especially if they are really trying to write as fast as they can.

Last thought- Free writing is a great creative tap, but no tool in your toolbox is panacea.  You won't always get something great out of every session.  If you're dealing with a particularly troublesome block, you may need multiple sessions to get a good idea going.  But the process of thinking ABOUT a problem at a deliberately slow pace (the pace of writing) but not allowing your mind to wonder too far from the topic is one of the most creative ways to think.  Free writing forces both the slower paced thoughts and the topic tether that promotes maximum creativity, and should eventually yield fruit.
at November 10, 2012