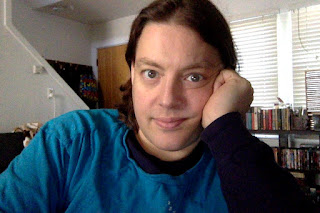 Today, let me tell you about what to expect from April, May, June, probably July, likely August, and not without-incidental-chance September and onward.

I was hoping to finish Tuesday's article about working at home, but it looks like that might get moved to tomorrow (and, full disclosure, even THAT is if I'm lucky). I only have a couple of hours in the morning before I have to get going on other work and my schedule has been brutal.

I know this is just a fanfuckingtastically horrific time for a lot of us. The cracks in the social contract wall we sort of knew were there are gushing water, and the ones we couldn't see have begun to leak. It's easy to fall into the morass all this leaking and gushing water is forming and feel like there's no bottom.

And as we sink to the bottom, I'm going to be one of those who're telling you to look at me as I do jazz hands and making joke the whole way down.

Normally, this is the time of month when I would be pointing to my Patreon and making an impassioned plea for financial backers. Of course, if you're still up for that, it would be amazing, but I know financial life is about to get super weird for all of us. Crowdfunding artists and entertainers is probably one of the first things to get cut as the global economy collapses. ("Well, we could eat this month, but then we'd have to stop paying this guy in California for his mildly amusing listicles. I'm sorry, Timmy. It's stone soup again tonight.")

However, I want to make a promise here and now. I'm going to keep doing what I'm doing here at Writing About Writing, and in all the other places I drop written thoughts or memes for days. Barring illness (or worse), I'll be here. I might lose some days to grief and I can't promise I won't get furious at some politician (like I did THIS morning) and spend the day writing about non-writing topics, but no matter what happens, I'm going to try and keep people on the other side of the Internet from feeling alone. I'm going to entertain you, hopefully make you think once in a while, flip my hair, jazzate my hands, and if I can get some snorts and giggles in such difficult times, I'll call it a big, big win.

I've got a handful of posts about CV-19, and then I'll go back to the About Writing part in earnest. And just so you know, I'll be taking some days off in April to work on my manuscript. (From the early results of Patrons' polling, it looks like overwhelmingly that is going to be a handful of days in a row instead of spread out through the month.) I lost a couple of days to that "What the fuck!" right at the beginning––just like everyone else––but if anything I'm spinning up and starting to run my engines hotter than normal. But, for the most part, I just want to assure you that I'm not going anywhere. I'll keep pumping out memes and articles and those terribad Airwolf and Knight Rider jokes as fast as I can.

I think most artists and entertainers mostly want to survive capitalism and if they make more than a shoestring living along the way, they're as surprised as anyone. In times like these, we artists and entertainers are going to keep arting and entertaining as hard as we can (harder even?) to keep everyone's spirits up. I'm right there with them. And if you want to remember us when this is all over, I don't think there's one of us who wouldn't love that, but for now, let's all just get through this. That guy will sing. That woman will read a poem.

And me? I'll make '80s and '90s pop-culture references and bad jokes while telling you about writing.